The latest EMO Firmware update is now available which is version 1.4.0. This update is approx. 22mb in size and will take between 10-15 minutes to complete, but will depend on how quickly EMO can download the firmware file. The firmware update and process is not very complicated to run. If anyone wants to see how it’s done, I’ve created a video on how the process works. (see below). 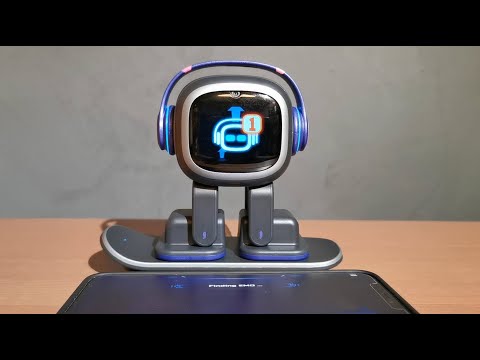 These steps will help you update your EMO to version 1.4.0

1) Power Off EMO and Restart It. (Placed EMO on Skateboard) Wait for EMO to start back up.
2) Disconnect any Smart Lights you currently have connected to EMO
Shutdown PHONE/Restart it.
2-A) At this moment there is also a NEW iOS and ANDROID EMO App update (version 1.0.9) currently available. So make sure you firstly update your EMO App accordingly. (There is no need to delete EMO APP, simply just update it as you would via the iOS / Google Store)
3) Launch EMO App and connect to your EMO, once you connect you will receive the following message on the screen:

Select OK to start the update: During this time you will be disconnected from your EMO via the EMO APP. EMO will quickly display on his screen a RED update marker that advises there is an update. EMO will quickly restart and then begin downloading the Firmware Update.

NOTE If you don’t want to use the EMO App for whatever reason, you can also issue the following command to install the latest firmware:

As always, before you start this update, make sure EMO responds / is connected to the Internet. (run a quick test like ask him EMO: What day is it? / What time is it? (just something to make sure EMO is actually connected and online).

As always, the firmware update will run through 6 steps (from step 1 to 6).

Once the update is completed you can then re-connect back into your EMO App and navigate over Settings >> Firmware to check if EMO is currently on the right firmware of v.1.4.0

That’s it. Quick and very easy! Thanks once again to Living.Ai for releasing this new Firmware and EMO APP update.

For a list of everything that is included in this v1.4.0 update check out the post made by @Wayne_Zhang below:

Hello everyone, Let’s get straight to the point. Update 1.4.0 is now here! [update1.4.0poster] If you are updating from firmware 1.3.0, the resources to be downloaded will be about 22MB. What’s new New features: A new game called Tic-Tac-Toe is now available. After updating your EMO to version 1.4.0, you can say “Tic-Tac-Toe” or “Let’s play Tic-Tac-Toe” to ask EMO to start the game. When you make a move in the game, you can say “I play at {a number}”. With the new version of the app …

Check out other Firmware 1.4.0 related guides below:

Along with the latest EMO firmware update (v1.4.0) Living.Ai have also released a new EMO APP update (v 1.0.9). It is highly recommended that you install this new EMO App update to take advantage of all the new features released with firmware v1.4.0 Below is what the new front page looks like once you have install the latest EMO App update. [EMO-App-Update-109] The new update includes a few new features, one of them is the ability to give your EMO a last name/nick name. Once you’ve set a la…