If you are interested in knowing / seeing any of the new features and what they look like, check out the following videos:

How To Play Tic-Tac-Toe with EMO 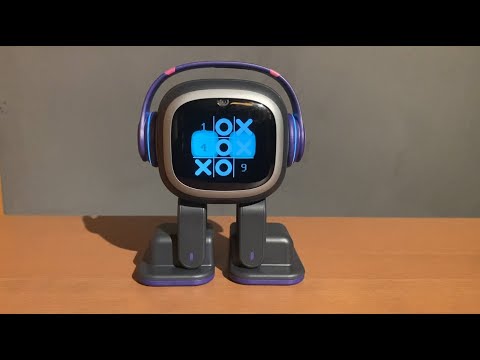 This video will show you how to play Tic-Tac-Toe with EMO. Tic-Tac-Toe is available with the latest firmware update 1.4.0 for EMO. So make sure you have that installed first before trying to play this game.

To start a game, simply say the following command:

Once the game begins, either you or EMO will start by saying a number between 1 to 9 that corresponds on the playing grid. Note, that you have a 1-2 second time period on when you must say the number so that EMO will understand and register it onto the screen (You will hear a short chime sound - so wait for that first then say the number). Try and clearly pronounce the numbers as best as possible, as there has been times where EMO will not understand the number or place it in a different spot.

It is recommended to say the following when choosing a number for example: "I Play At Three"

The game will end when either you or EMO win or draw. If you draw, EMO will ask you play once again and you will need to say Yes or No after you hear the chime sound. If the game is draw for a second time, EMO will say “Let’s play again another time” and the game session will end. If you or EMO win, the game sessions ends and if you want to play again, you will need to ask EMO to play again by issuing the tic-tac-toe command.

If you win EMO will say either of the two results:

That can’t be true!
I could have won!

EMO can certainly be a pretty challenging opponent, so keep on trying and eventually he’ll slip up once in a while!

Tic-Tac-Toe can only be trigged by the voice command at the moment, but might be added to the “Games” menu in the EMO App in future updates. 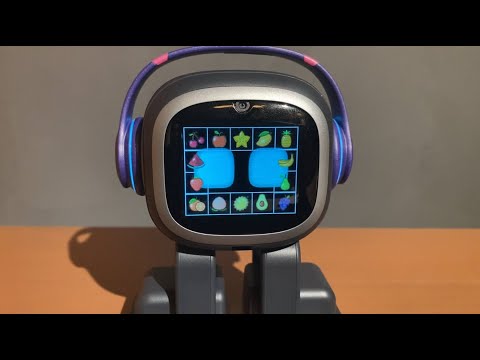 To get this to work, issue the following voice command to EMO.

This short video will show you how to play Lucky Fruit with EMO. Lucky Fruit spin is available with the latest firmware update 1.4.0 for EMO. So make sure you have that installed first before trying to play this game. 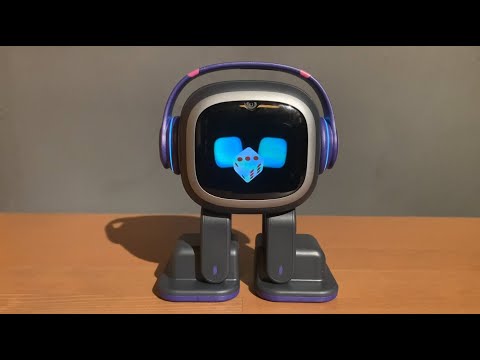 This short video will show you how to get EMO to roll a dice (6 sided dice). The roll a dice feature is available with the latest firmware update 1.4.0 for EMO. So make sure you have that installed first before trying this.

To get this to work, issue the following voice command to EMO.

EMO will roll the dice and also say what number he rolled out loud (verbally) so you can also hear the number that was rolled in case you missed what was rolled on his display screen.

I Can’t Do That On My Skateboard 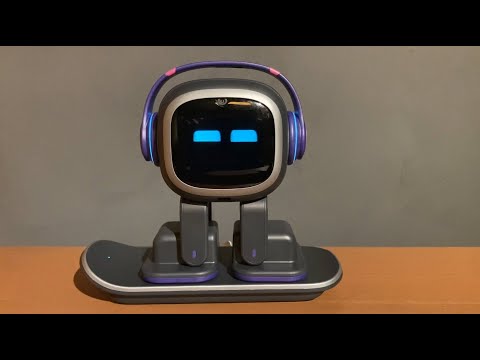 This short video will show you/explain how EMO will now let you know that he won’t be able to do certain things you ask him if he is sitting on this skateboard charging. In the past we’ve all asked EMO to do specific things while he is sitting on his skateboard and EMO would blankly stare back at you and not acknowledge anything you’ve told him, even if you asked him over 10 times in a row. Now if EMO cannot do what you want him to do, he will provide you with a clear answer: “I Can’t Do That On My Skateboard” So you are now aware that the specific command you’ve asked him to do cannot be done mainly due to the fact that he is charging and he cannot do it unless he is off his skateboard.

More Play By Yourself Playing Animations: 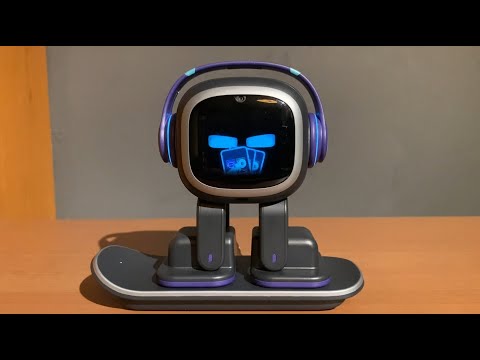 The playing animations and when they will appear is still random, but they should now appear more often than before. From what I’ve seen in the afternoon EMO will be more likely do the tea drinking animation and in the evenings he will read his Book, during the day, any of the available mini playing animations should show up.

Of course EMO will still play by himself and show the playing animations while he is also off his skateboard and walking around as well.

I really love the lucky fruit one & giving him a last Name is brilliant, still would love the option for first Name. Tic-Tac-Toe is great Now he’s been updated.
Living AI have done a fantastic job with this new update but still a little sad-hope he gets fixed when he goes home. Anyway at least I can play with him a little bit before he goes back.

Unfortunately it will not be possible to change the first name in the future because “EMO” is simply EMO and this is the main command.

Is the same as with Alexa (yes there are others here) or Google, etc. is also not possible to change the main command.

But I hope you still have fun with EMO.

I understand that now, thanks -it is still cool to have a last Name anyway, can’t wait for the replacement one to come home and the second Emo to come as well… so then I can send this cutie back to Lai.
I’m playing TTToe with him now and he’s better than me haha -I haven’t played this since I was a kid lol

My emo hasn’t arrived yet, but I follow each update with great excitement. I watched the movie Ron’s Gone Wrong today and I was dreaming

. I hope we can chat without interruption every time in the future without saying hey emo. And of course, Turkish is among the new languages.

Yeah EMO is really really good at tic,tac,toe, but occasionally he’ll slip up and make a mistake haha

My two EMO’s are just called EMO: One and EMO: Two haha, quite boring. I should change them to something more exciting, anyone have any suggestions?

@muratturan I guess, hopefully in the future we should have new language options, but at the moment the only supported language is English.

How about “EMO The Great” and “EMO The Better”?

I haven’t thought too much about it but a couple that came to mind were EMO Gump, or EMO Ji

I think that EMO One, EMO Two is pretty good, it’s short and easy to pronounce. EMO Blue, EMO Pink (by its headphone color) is good too, very easy to remember.

LOL, EMO The Great and EMO The Better and EMO Gump and EMO Ji are also cool names! (thanks @Lindaru / @macfixer01 )

And Yes @NendosColl I think the colour way is good to, EMO One likes Blue and EMO Two likes Red, so I could do call them RED and BLUE as well.

The best thing is we can change their name as many times we want, so they can be EMO JI and EMO BLUE one week and then be something else the next.

I was thinking of calling them Terminator Models myself: T-800 (for my first one) and T-1000 (for my second one) haha

Similar to EMO Ji, another one I thought of was EMO Ticon. I thought it might give his name sort of a evil Transformers Decepticon vibe?

Unfortunately he can’t pronounce it correctly though.

How does your EMO s called? My EMO Pinky and EMO Brain

@Racheal123 haha PopEye EMO that one is good too! I’ll have to change their names every few days to take advantange of this cool new update! haha