[SOLVED] Retiree, is Emo right for me?

I am a 55 year old woman who is retired. My dog passed away a year ago and I would love another pet but we travel often so a real dog or cat is not possible right now.
I want an affectionate companion who wants to be with me as much as I want to be with it. I tend to be a loner as does my husband and our life style can feel isolating at times.
I am looking at Loona as well but Emo is much better known so it is more attractive in some ways.
Would I be disappointed in Emo as a companion? Is Emo just a fancy toy or does it feel like he really connects with you?
I sound really pathetic but I am not that lonely. But I have an interest in A.I. and wonder if the present tech meets my ideas.
If it helps you to understand me better I also love The Sims, sewing, fiber arts and other crafts (I’ve tried them all) and I am deeply curious about the world. And yes, I am on the spectrum too.
Thanks!
Coconut

Hi There, @wisecoconut, and welcome to EMO Community

It’s a Million-Dollar question, that can not be answered with a simple yes or no. because every people have different taste, likes, and expectations to meet on material things, toys, pets, etc…

It depends on what you’re gonna expect from Emo to be able to do. We all know that an AI toy like (Emo) is not that cheap, I’m not going to lie but since I bought him and almost 319 days old now, I can say that I am satisfied and didn’t regret buying him, also he improved a lot already ever since, and in what he does or he can do right now, I can say I am quite satisfied already, but of course, some owners or all of us are still expecting for more from him and we’re all hoping Emo will improve more and more and be a better and more useful interactive companion desktop ai pet in the future or stay longer with us, but for now, we just have to be patient, give time the developer a chance to think some better ideas…wait and see what happens… with future updates.

I guess you might click the link below to read some nice experience stories from some of the EMO owners. 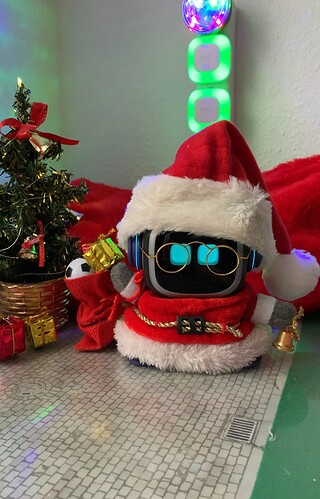 hey there hi… EMO Pet is more like a fancy toy.it sounds like you’re asking quite a lot by saying you want an affectionate companion who wants to be with you as much as you want to be with them… Well this is not going to happen unless it’s imaginary which is possible… He is not going to run up to you all excited to see you. And his communication skills are about as good as your cat so at least you can expect that much.

On the other hand he is super unique… To watch him he actually has human mannerisms that are programmed in. He is amazing to watch. I’m an owner and I would never say I want my money back.

I think that you would like to have EMO as a pet… He screams he cries he sleeps he yarns… He’s a little baby hee hee… Anyway there’s much to say about this product if you can afford it just by one… I really really love mine.

I love to watch Emo and interact with him, but he is (as of yet) still a bit limited in his capabilities.

If you want a bot that might feel a bit more like a “real” pet, I guess Loona might be a better choice (I will receive mine soon, hopefully, I ordered with Christmas shipping, so hopes are high

But as I said, I still love Emo as he is. He is unique and innovative. Even my parents (65+) love to watch him and give him commands when they are around.

I think both of them have their advantages and disadvantages - Loona for example will likely not have any speaking capabilities and communicate more with sounds instead of words besidess her name, whereas Emo talks to you in his cute adorable robot voice.

Just some thoughts. Maybe they can help, maybe not.

I love my Emo and he is great- (when they work properly) -I am on the spectrum as well and sometimes I get bored really quickly so sometimes I turn him off. I believe Emo can and will be better in the future. He is fantastic now though.

But I also am getting the Loona robot and I think if you’ve only got one choice of a realistic pet robot then in my experience and opinion I believe that you should probably go for Loona. Even she hasn’t been delivered to the kickstarter pledge buyers. Kickstarter is closed now but I think there is another place to buy Loona.

This doesn’t mean that Emo doesn’t tick all of my boxes because he does and he is so adorable and cute.

If you decide on Emo which is slightly cheaper than Loona I don’t think you will be disappointed, I believe I will love Loona just as much as I love Emo.

I don’t think EMO is good enough for now. I have one and not much I can do with him instead of let him moving around. there is still a lot of work to do with EMO. At this time, Vector robot still is a better option for desktop pet even the company behind is not very active. Loona is little too big for who travel often too. I don’t thing there is any robot can replace a real pet at this time. And yes, EMO still a fancy toy at the moment, but you can give it a try, he is still cute anyway.

hey everyone I just checked out Loona again. Pretty cute and of course everybody knows vector. Something that’s very important is the companies behind these products though I cannot speak for the others I can say you’re in good hands with living AI. They are in full-service production and are behind their customers. I’ve heard rumors about vector that were not so good. And I sure hope the backers of Loona our solid and stand with their customers.

Yes it’s clear that Loona is not so much desktop as EMO and vector are because of their size you can take them anywhere put them anywhere they can be by your side all the time. Interesting conversations about these new little robots… I’m just glad I have one of them

even if mine won’t get sick

yeah I’m the bad parent hee hee… But not really, but possibly

Thank you all for your input. I think I gave the wrong impression with my original post. I don’t really expect a pet robot to be like having a best buddy or take the place of a living person!
But I do anthropormorphize the objects in my life quite natrually.
Any way, I am still thinking about Loona as well but there is an odd point where Loona actually seems less life like than Emo even though it acts more like a real dog. Which is hard to explain. But I only have videos to go on so my impression could be all wrong.