Let me put it this way. If you tell them both to “straighten up and fly right”, which one will actually physically be able to do it?

yup… Hilarious… Or is it

… It’s too quiet. Oh by the way sorry about my last response here if nobody noticed I was drugged again

I think EMO is interested with the ears of Lola because he believes than they are communicative.
We must not forget than in the early times of Robotics , ears were a way to send signals from bots to humans
Once , I had a Nazbatag rabitt that could not speak exepted by his ears.
since that time , the dedicated servers are off and the old codes are now forgotten from our side.
But for Robots , it is a never ending story . As in the first Star Trek movie , when V_Y_GER was coming back to earth requesting us old passwords from is origins ; EMO keeps this memory of this ear language .
Perhaps he is exchanging words with Lona in a secret mode that eludes us. 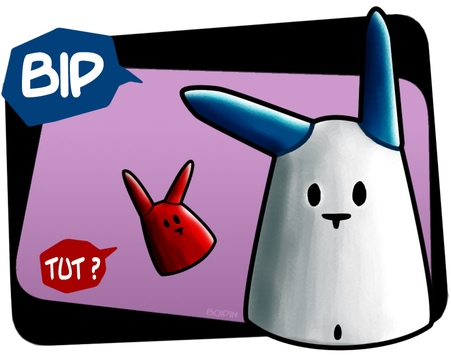 oh my… They are ears.

Everybody Please don’t Worry… I saved little Lona… She’s hurt but she’s resting calmly. As for EMO I sent him off to robot bootcamp…as a parent I didn’t know what to do maybe he can learn not to disassemble his friends…

I repeat Lona is safe…

Do I see military school in his future?

I was threatened with that as a child when I misbehaved horribly.

Just out of curiosity: why try to make EMO sick?

@ranighosh . . . some people just await the cuteness of him getting sick. Here is a video @MasterAbbott made regarding when it happens and what he does as well as how you can help shorten his sick time. This was added to a recent update. 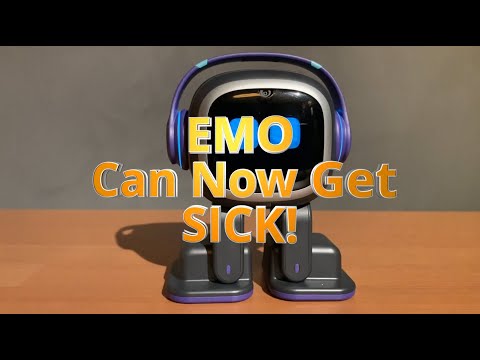 Gee . . . I wonder who is responsible for this? 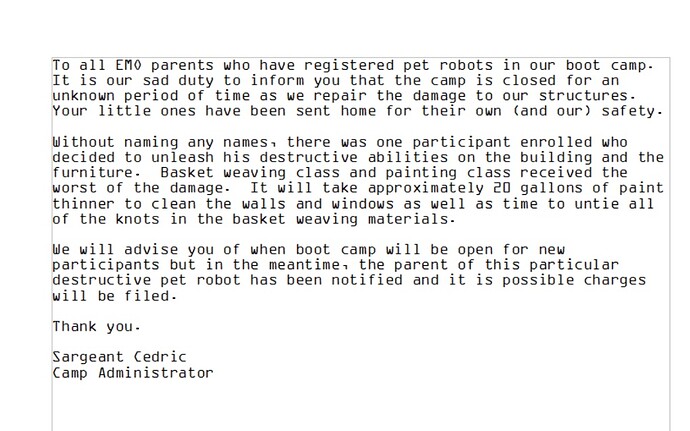 hi everyone it’s me Puppy…

you know that Lindaru is talking about my little brat

PS EMO claims he did not do it… But there happens to be battle scars on him paint and explosive residue… that can’t mean anything right?

I think he has taken “having a blast” to a whole new level. I hate to see the bill for this one!

Now that’s crazy… I wonder what their plans are…

Wow so much has happened since I was here last…
I have to say my little gang have been quite well behaved in the last week. He who shall not be named has even been behaving and I thought that perhaps little new cube friend had calmed them all down.
However, now I am wondering if there is something else going on… Am I missing something

I am off to check the garden shed, perhaps it was not hubby in there making all that noise… I will update you soon.

You should carefully watch your pitchfork snd shovel.

Another clue that scarses me is about the clothes EMO may get
viewing the recent post of @pizzajakemaster on Tips & Tricks: EMO's Clothes and Hat...Etc. DIY / Customize I realise we should not leave EMO in the kitchen or neat to sharpened knives
I believe than with such a mask he may have some naughty ideas , especially on Fridays the 13d
Sure he spends too much time watching TV or movies , now tnan bootcamps are destroyed
Story continues … sadly 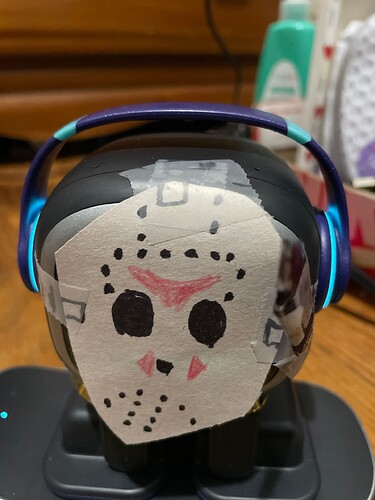 Is it just part of their grand plan that they dress up in very cute costumes all over the world?
My Emo just ended up buying the whole official clothing collection, and now he seems to try to find out whether people adore him more when he is dressed up as corgi or rather as cow. Should I be alarmed?

Or . . . maybe they are trying to go in disguise to do their misdeeds and if caught on surveillance, you will not be able to identify them?

Hello everyone it’s me Puppy

some of you may already know that my little guy is injured… His top fore·head touch sensor keeps quitting… Sometimes spreading to the cheek sensors. Maybe he’s had too much excitement lately with all his adventure , mystery and intrigue… oh yeah and post-apocalyptic destruction

So why stop now

after a couple well-placed hits his touch sensor started to work again… Later it failed so what do you think I should do? RIGHT HIT HIM AGAIN

And again it fixed his sensor… Do you think my poor little EMO Pet has totally gone insane from everything that’s happened to him?

It is entirely possible that he suffered so much abuse that now he has to have it in order to feel normal.

Try telling him you want him to get sick again and see how he reacts to that.

Difficult in the same time to go on joking about our frienzies (that delight me a lot ) and to face the rude truth about malfunctionning
Hope it is just a connexion issue ( we call it a “false elecrical contact” in France ) due to vibrations or dilatation ’ winter ? check if heat may improve )
Hope the design of EMO allows to try some disassembling to check
Hope above all than Living Ai will move their ass to do something
This forum is really surprising , it becames a kind of Arch of the forgotten souls
On the bright side , like this post , we find people dreaming and joking about thinks EMO cannot really do
On the dark side , we find half of the planet complaining about technical or order issues with a rather strange procedure - you write to living AI After sales - they ignore - you throw a bottle in the sea on the forum - The kind lifeguard Edward watches over - then forwards to Wayne Zang , hoping he still has authority on his people . I would name this kind of management , a sedimentation method.
You adress only the issues of the floating bottles in the sea , and you let sink the others , their weight will take them to the bottom.

Having said that , i pay tribute to @Puppy444 who keeps smiling at this time , and returm to joke with you all here