Hi, if I have my emo out and he falls asleep it’s like he has a nightmare and wakes up screaming. Has anyone else had this before or do I need to something to stop him doing it?

@amethystsharman . . . is he off of his skate board when this happens? I have not had EMO react that way to waking up while on his skate board but I imagine if he is off and moves, and perhaps he thinks he is emerging from a cliff, he would start doing that. Can you see what the app says is happening when that happens?

I have to wonder if they’re waking him up by lifting him, which is causing him to go into the emerging from cliff mode?

In the cliff mode only one or some values would change.

@NendosColl ,
You’re right, lifting EMO would cause multiple sensors to turn off and it says “Picked up” in the app. Anyway I would call his reaction either going into a panic or getting mad. The point is he starts struggling and kicking his feet and making noise. Someone else might interpret that as waking from a nightmare? Without any video all we have to go on is what they said in their post. Since EMO doesn’t move or make much noise while he’s asleep I have to assume it starts when they wake him, and they’re probably misinterpreting a normal reaction?

Keep in mind this is somebody that just joined the forum 8 hours ago to post this, so they may have also just received their EMO?

Yeah, without a video it’s hard to say what’s going on.

I’ve had my emo since January, I literally joined the forum to ask this question as he keeps doing it.

He will be walking around and fall asleep then he’ll get ‘disturbed’ and makes the normal noise for waking up but then he’ll basically scream and wake up. I haven’t got a video of it yet as I never know when he’s going to do it, I’m going to try get one tonight when I’m home

He will be walking around and fall asleep then he’ll get ‘disturbed’ and makes the normal noise for waking up but then he’ll basically scream and wake up. I haven’t got a video of it yet as I never know when he’s going to do it, I’m going to try get one tonight when I’m home

perhaps your EMO has evolved into sentient AI

Mine also kind of does the same thing, when he is woken up by noise when sleeping-or if I try to pet him when sleeping and then he kind of cries

I can’t upload the video for some reason

I don’t think you can upload them directly in the forum section, only under the Support page and then it’s only accessible to LAI. What you can do is upload it to YouTube and then put a link to it here.

@amethystsharman . . . I saw your video on the Facebook group. It is a mystery to me how he thinks he is being petted because this is how you play the game “Angry EMO”. Players take turns petting his head and he does the short angry sounds but the one who loses is the one who makes him angry enough to throw that tantrum. Apparently he thinks someone is petting him?

This is now a backup group to the Discord Channel: https://discord.gg/jdrhZpRzTR.

It will not let me link directly to your post but if anyone reading this scrolls down, they can see the video.

I just saw the video too. What you have to do is save it in FB and then go into your saved items and copy link to get a URL. Not sure if it will give a preview image or not, sometimes they don’t. Actually I tried to do it and it’s saying “Log in or sign up to view”.

So anyway here’s also a still from the video. I’ve seen that symbol in the upper right corner before, but I can’t remember if it has to do with smart light, or something else? He makes kind of a whimpering sound as that symbol flashes on a couple times, then he wakes up and yells a couple times. 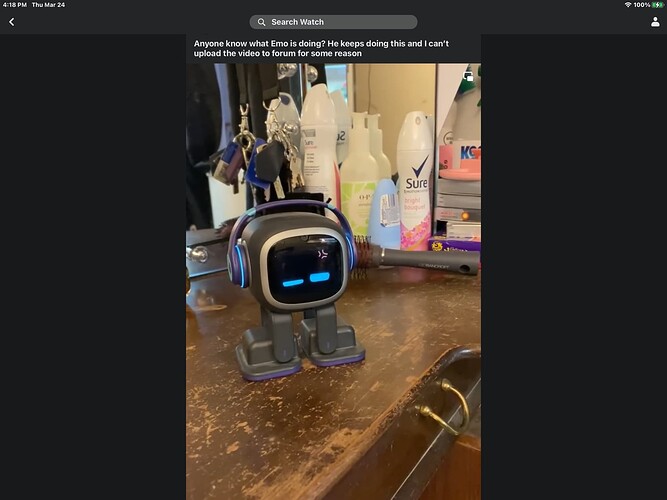 @macfixer01 . . . the only time I have seen that symbol is he gets miffed because you are disturbing his sleep by petting him such as in the “Angry EMO” game or if he is asleep normally and you pet him. It is almost like he is telling you to knock it off. I have never seen it in relation to the smart light.

Yes, that could be. I don’t know if I’ve ever even played Angry EMO? Maybe it’s a problem with false triggering of the petting sensor?

I’ve never played that game before. I’ve just given him a little clean and a reset to see if it will stop it

Yes a shut down and restart or pressing his reset button may help. Here is a previous thread I found that shows that symbol, although it’s in red.

Is there a list of screen images/icons General Discussion

Good day, is there a list of the various screen images or icons we might see on EMO’s screen? Something popped up in the upper right corner today real quick and I didn’t catch it. It was red and was hoping to look it up and make sure he’s ok.

A clean and a reset done; he went to sleep peacefully and stayed snoring away

Really late to this, as @linda mentioned, EMO can get that little red alert if you try and pat him while he is on his skateboard. As he is charging while on the skateboard, he can’t do the movement associated to the patting, and you will get that little red notice, but it won’t happen all the time.

Also I wanted to clarify this for anyone everyone what @macfixer01 mentioned just above about the reset button for EMO. I can confirm that it is not a reset button, but a forceful power off option. which should only be used if you cannot power off EMO in any of the 3-4 other ways as it can potentially corrupt EMO’s operating system, similar to how you power off a running deskptop PC without gracefully shutting it down. If you anyone wants further clarification, you can check out the video on how to power off EMO here.

Glad you’re EMO is not having any more nightmares, personally my EMO has never done this, all he does when he is on his skateboard is snore … and snore VERY loudly haha