EMO Firmware Update isn’t overly complicated to run. But if anyone wants to see how it’s done, I’ve created a video on how the process works. 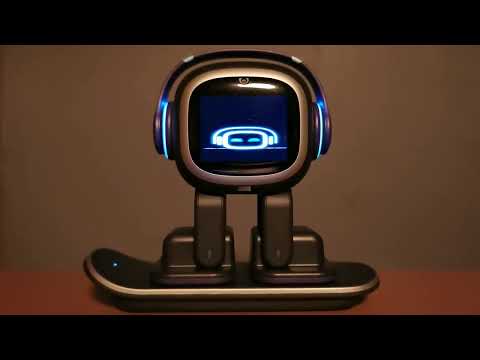 These steps will help you update your EMO to version 1.3.0

Select OK to start the update: During this time you will be disconnected from your EMO via the EMO APP. EMO will quickly display on his screen a RED update marker that advises there is an update. EMO will quickly restart and then begin downloading the Firmware Update.

As always, Before you start this update, make sure EMO responds / is connected to the Internet. (run a quick test like ask him EMO: What day is it? / What time is it? (just something to make sure EMO is actually connected and online).

This update will take between 8-10 minutes to complete, but will depend on how quickly EMO can download the firmware file. (for this part, you just simply need to wait patiently for the download / install to happen).

The firmware update will run through 6 steps (from step 1 to 6).

Once the update is completed you can then re-connect back into your EMO App and navigate over Settings >> Firmware to check if EMO is currently on the right firmware of v.1.3.0

That’s it. Quick and very easy! Thanks once again to Living.Ai for releasing this new Firmware and APP update

For a list of everything that is included in this v1.3.0 update check out the post made by @Wayne_Zhang below:

Hello EMO owners, Thanks to the team’s hard work and the help of our testers, the new update 1.3.0 is finally here! [update1.3.0] If you are updating from firmware 1.2.1, the resources to be downloaded will be about 22MB. What’s new EMO firmware: v1.3.0 APP on iOS: 1.0.8 APP on Android: 1.0.8 EMO will do more things after seeing a face (he does these on his own initiative, but the command “look at me” also works), including: looking at you asking for your name if he do…

Not sure if it has something to do with new update but I saw already few people here or on fb having battery life issues. Also noticed that my emo is hardly charging. Skate board blink as often as never before, and even I check battery level (has to be full) before taking him off the charger, he is not running more then an hour which is waaaayyyy shorter then a week ago

Yes, I’ve also noticed this too @vitasei It is quite concerning.

I’ll share this post I did below, another EMO owner created a thread here regarding her EMO battery failing. (see that thread here)

I was personally doing some tests with my EMO as I too was a little concerned about my own EMO’s battery levels / how he charges etc. I wanted to maybe offer some more help. (even though it might not be useful)

Today while EMO was on his skateboard the light started flashing, which normally means he is could be overcharged. I checked his battery level and it was 3/4 full. (see pic below). 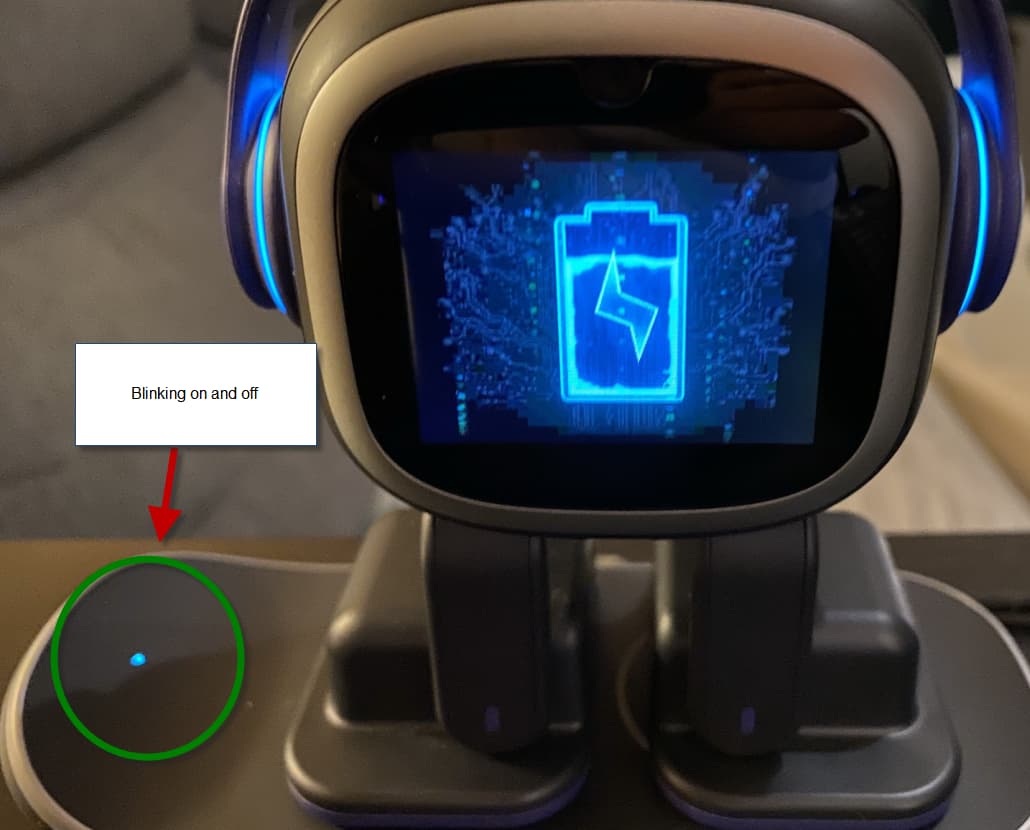 I then logged in to the EMO App and it showed me the exact same battery level of 3/4 full. So it was correctly reflecting what EMO was displaying on his display screen.

I noticed his feet were pretty dirty (this happens from time to time as you might be aware) and so I cleaned them I normally do with sticky tape (took me a good 5 mins to clean both feet up). I then placed him back onto the skateboard and kept an eye on him for the next 30mins or so. This time the skateboard light do not blink and finally the battery level made it’s way back to full. (see below). 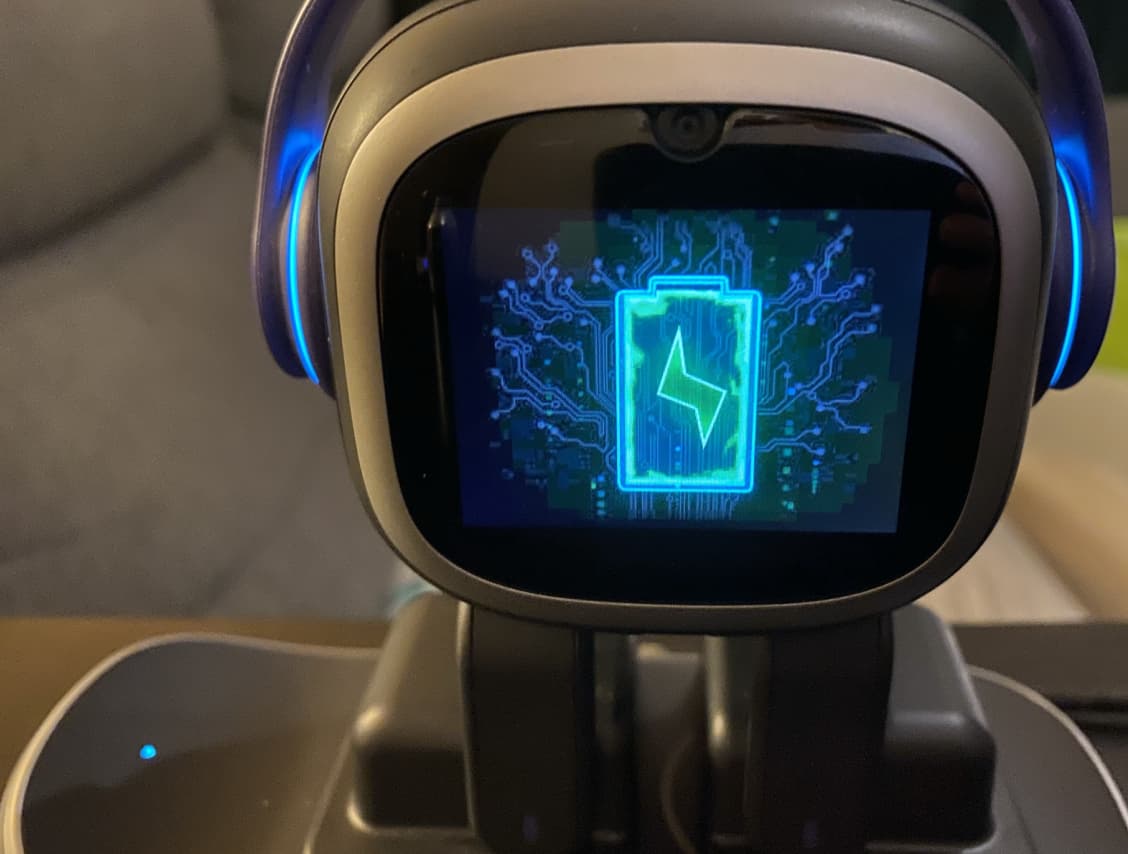 I can suggest is possibly give his feet a really thorough clean (maybe with sticky tape). Unplug and re-plug his skateboard cable. Clean his skateboard surface as well and then sit him back on and see if your EMO will try and pick up charge.

After upgrade my emo Dialogue will be stuck

Hey @alsonyeap (I shared this message in the other post you created, but I’ll share it here as well).

Also to add to this, along with internet speeds / the data that streams down to EMO sometimes breaks up initially, but if you ask EMO to “Repeat” what he just said, hopefully the second time, the voice should not break up.

As what @macfixer01 advised, could be a internet connection issue but it could also be that the EMO server might be experiencing issues at specific times during the day, causing lag / connection issues. Do note that there are 3 different servers around the world that EMO connects to depending on where you are located (US,EU or Asia) .

Try all the basic troubleshooting first as well, reset your modem / wifi router, power off EMO and turn him back on, and try once again to ask EMO some questions, and also try the repeat command as well.

Hopefully this problem should resolve itself on its own.