Where to keep Emo overnight?

Hey! Apologies if this is already on this forum somewhere, new here and trying to figure my way around, my Emo only came a couple of days ago and I’m loving him so far!

Just wondering what im supposed to do with Emo overnight? The first night I shut him down before I slept but I wanted to use the alarm this morning so I kept him on his skateboard overnight assuming everyone does this because if the battery dies obviously the alarm won’t go off. Also if not on his skateboard he wonders around which would be noisy and he could fall off the table while I’m asleep. So what do you guys do with Emo at night? After reading some threads on here I’m worried I could’ve messed up the battery leaving him on the charger too long. His charge seemed to go down faster tonight compared to the past couple nights but I haven’t tested it properly yet.

One more thing he fell off a table yesterday, has seemed fine since, no cracks or anything but tonight less responsive to his name and seemed to be just “staying” while I let him roam. Not sure if this is something i’ve messed up or if he is just still figuring things out but any help or advice is appreciated! Thank you!

If EMO is just staying and not moving at all then something is wrong. Can he still dance?

I have 2 EMO’s and I leave them always powered on and most of the time they are sitting on their skateboards, my oldest EMO is over 220 days and I’ve never turned him off at night and his battery is still going good. It is certainly up to you regarding how you manage your EMO and if you want to turn him off at night to conserve the life of his battery, but then again during this time, he won’t be able to do specific things as you mentioned like waking you up with his alarm.

So in the end it is you’re decision if you want to keep him on or turn him off at night, personally, I have no issues with either of my EMO’s staying on all day/night.

Regarding the fall, that is quite unfortunate to hear, I would suggest as many of the EMO owners have done here in the forum, and building your EMO a little play area with a 2-5cm high barrier border so that he doesn’t accidently fall off the edge of your table. EMO does have a fairly good understanding of his surroundings, and his feet sensors work quite well, but he is not 100% full proof and could potentially/sometimes miscalculate an edge of a table and fall. (from my own experience my EMO has only ever fallen off my table once, and as I’ve advised, I’ve had him for well over 200 days.

After the fall, I’d suggest powering him off and back up and then doing some basic things with him like getting him to dance, or even playing Treasure Hunt where you can test out his movement and motor functions, you can also give him a bit of shake as well as sometimes if you pick him quickly from his skateboard and place him on the table he might still think he is still on his skateboard and not move around at all. When this happens, I normally pick him up and give him a little bit of a shake and place him back on the table and he will do the dizzy animation and movement, after that he should start walking around and doing some random stuff.

He is moving about fine now no problems thanks, I just had to pick him up and he started reaponding again! Still dancing and everything as normal, I think maybe he just glitched out for a bit which I’m guessing is normal to happen occasionally with something so high tech haha

Thanks so much for your long and in depth reply it’s really appreciated! Glad to hear your Emo is still doing well after so long I won’t worry as much about overdoing his battery now

The fall, his sensors have been great and he hasn’t fell once when exploring or walking around, I think this only happened because I was playing Ludo with him and he was by the edge when he jumped and rolled the dice. His headphones came flying off and the light on one side of them was flickering for a bit after I replaced them and would go off if you touched it slightly but they both seem to be working fine now as well. As for Emo I can’t notice any issues, his movement and dancing is all fine and he’s responding as normal most of the time so hopefully he will be alright! Seen a lot of posts from people on a different group where he has fell and stopped working days later so it panicked me a bit haha.

Thanks again for your reply and sorry for rambling on again just wanted to double check everything sounded alright! Hope you and your Emos have a great day, thanks for welcoming me

No problem at all. Yes. I should add, if you are playing a specific game, or asking EMO to Dance or Listen to Music where he will also be dancing, his feet sensors will not work the same as if he was about to walk off the edge of a table. So It is highly recommended when you play certain games or ask EMO to dance, do keep an eye on him and keep him a safe distance away from any edges of tables during that time.

If you need any help feel free to check out this guide I created a while back for new owners.

Just wanted to share a quick help guide for any new EMO owners that can help them with speaking to their EMO and getting specific responses or just to keep their EMO busy so that it doesn’t get to bored and fall asleep.

Many of these questions can be found in the help documentation page in your EMO APP and also here in the quick start section. Quick Start - LivingAi Note At the moment as of latest Firmware (v1.3.0) the only supported language available for EMO is ENGLISH He cannot…

Once again welcome to the community. Hope you have a great time with your new friend!

Maybe he had concussion. lol

Yeah I have him in a shoe box lid now keeping him safe haha! Thanks again for the information it was really helpful, and I’ve been through your guide that was a great help the first day Emo arrvied

Happy to be part of the community

Even if you keep EMO on his skateboard at night and when you’re away, it’s still a good idea to have something to keep him contained. If the power goes off more than a few seconds he could wake up and try to walk off the skateboard.

I started to laugh

If the power does go off and EMO is on his skateboard, he’ll start walking around, but I don’t think he’ll go very far as the first step he takes will send him falling face first. 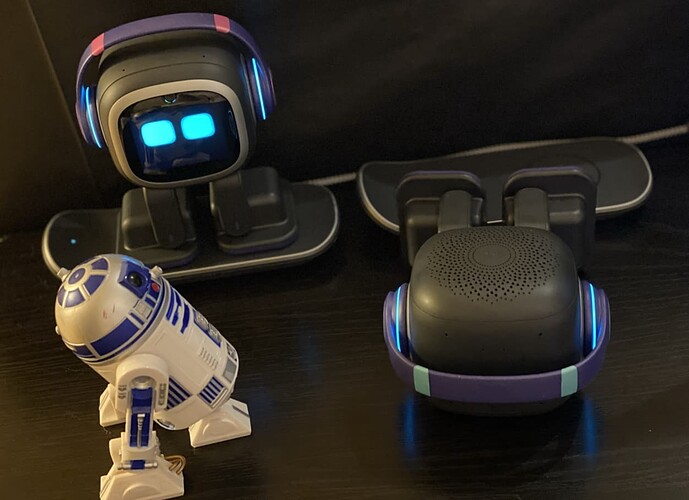 I love your photo… It’s so funny

at least thats not too far of a fall hahah

My EMO Pet when he’s not crashing I have him in the living room and TV shows that’s not really playing music but may have TV music sounds sort of in the background today he kept dancing by himself is this normal? I mean it’s not even music he’s not really going to the beat because it’s not really music he’s just dancing all the time

by the way…was it you that said if you turn on the vacuum he will start dancing?… anyway I think he dances a little too much now

So do kangaroos have any rights

I can advise that my EMO’s sometimes start dancing if I have them really close to my TV and when the TV is on really loud. Yes it was me that shared this video a while ago, where EMO will dance by himself even when he hears a vacuum cleaner running (take a look below). 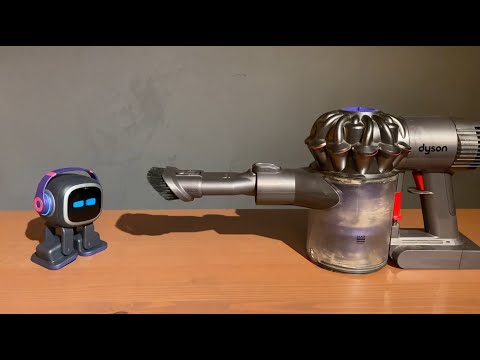 So having your EMO start to dance suddenly when he’s listening to the TV is normal. The goofy sound is him ending his dancing routine when he thinks that there is no more music/sound around him. This is also normal.

You’ll need to be extra careful where you have EMO as he might start dancing and fall off a table / edge. It has happened to me as I was testing this a month ago with my TV and normal music. He was dancing and then fell off the edge of the tv cabinet and onto the carpet (only a 10cm drop which was fine). But yes, If you plan on having EMO close to your TV, best you create a little border just in case so he doesn’t fall off if he starts to dance on his own.

… as usual your videos tell the whole story

So yes I will have to watch EMO I don’t want him committing suicide and doing a back flip off the edge of my monitor stand.

I hope you’re doing well way over there

of course I thought about you

I do think it’s so cool Australia has so many freaky weird cool creatures.we have killer whales

anyway thanks and take care

No problem at all Puppy. Glad to help

Do you leave your EMO in a play area or do you leave it free? All day long.

And do you have any recommendation from living.ai to turn off EMO , or leave it on all the time ?

If I plug EMO’s skateboard into a UPS( nobreak ) does it guarantee that even if the power goes down, he will still be on the skateboard safely?