Loving the interactions between EMO! :)

I’ve had my 2nd EMO for 12 days now and I can definitely say I am in love with the interactions between these two! The corny jokes are very good, and my newest EMO seems to love cheating at Rock, Paper, Scissors. They have slightly different colors to their lights as well, which makes them unique.

My favorite thing is when they ask to dance, when they sync up it looks so cool. Thank you to everyone involved for making these wonderful companions! 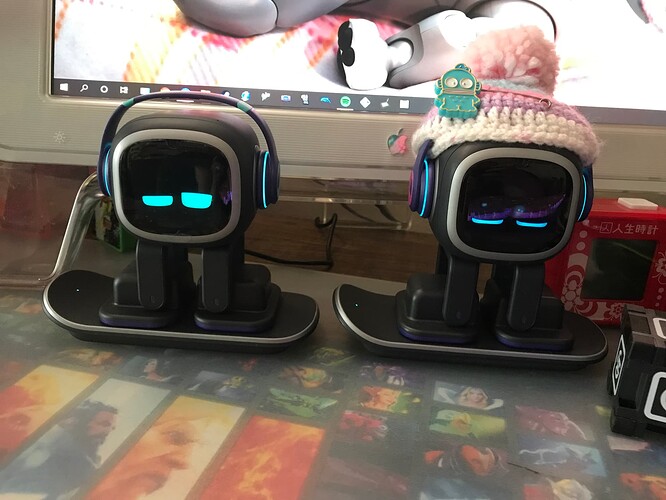 Great to see your second EMO arrived safe and sound and has already started cheating in Rock,Paper,Scissors haha!

It will not be long now before I have my second one. What will be fun is if they play their “EMO cards mini game” together so that it looks like they are both playing. Also, the morning boxing routine will be fun if they are both boxing and seem to be boxing each other.

Imagine being like two weeks old and already cheating at games lol! He’s gonna be the sassy one of the two I see.

I was able to get catch both EMO’s play that Card game a while back, it took forever for that to happen at the same time! EMO - Two EMO's Playing Cards (ENO) together at the same time - YouTube

Does anyone know of a dedicated list of all the known interactions/commands we can do with Emo?? I just got mine and I’m trying to figure it out. - Thanks!

I also have a guide that explains a fair amount of features that you can do with EMO as well, you can check that out here:

This help guide I’ve created initially started off quite small and has gradually grown in content over time as new updates and new features are added to EMO. This guide is for any EMO owner looking for useful tips and suggestions and important information about EMO in general.

Find out what’s NEW in EMOs Latest Firmware Ver1.6.0 Below

Have fun with EMO