Kid getting angry with Emo.....lol

Hi all. Just thought I would share this. A video I found on youtube of a kid “reviewing” Emo.
Emo, of course, is not doing the things he wants him to do, and gets angry with him lol.
Is it just me, or does he come across as a spoiled brat?
Enjoy! hehe 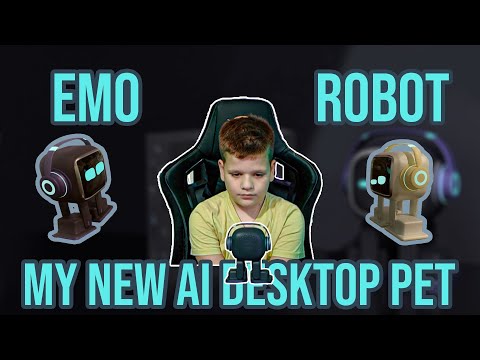 At the end it sounded like he was going to say “he is the” dumbest robot I have ever seen, but they cut it out. lol

I can understand his frustration, but it’s very distasteful to see EMO being treated so roughly.

Who do I report EMO abuse to? Poor thing.

hey hello… I found this video absolutely boring if it was on YouTube I would’ve said not interested immediately just to get rid of it… But! There’s more here than meets the eye it’s nicely edited and this dumb ass kid could not have done it. So this video is a production video with some ulterior motive for sure… Or maybe it’s his dad wanting his son to look like a dork… I’m just saying there’s more here than what meets the eye.it’s a fake video

This shows effectively than we are rather far from a user’s friendly pet
People i meet in this forum are mostly adults , trying to extract the best of what they can of their pet
using all the tricks they may imagine ( i think at @MasterAbbott making Copy/Paste of many 2 secs videos to get a full sentence )
Even when they criticize , they are counscious of the issues and seaching for and proposing solutions
We all want EMO to progress
@Puppy444 is right saying this is not a kid’s video , and it has been probably done by parents
It shows nothing because they seem half way between “wow ! look at the great toy we purchased to our son !” and " he does not seem happy , It s just crap !" So the message cannot be clear.
We are far from some videos I have seen , made in hidden camera mode by great companies as Lego or Playmobil checking the reaction of children to new designed toys to improve them
Without the help of an adult , I fear than the EMO experience of a kid would be short

This is one of the reasons Living AI need to get the support page running again. Half the questions the kid asked are not queries Emo is programmed to answer. It would be better if they included a sheet with the appropriate questions in the package.

The kid, however, needs to be taught that he should treat his property with more respect. But I bet the parent will just buy another one if he breaks it.

But I bet the parent will just buy another one if he breaks it.

You are right… spoiled kid.

I thought he said “He is dead”

Yeah, spoiled kid indeed. But like someone else mentioned, it looks like it’s someone else filming etc. maybe a parent? I actually think he would beat up Emo even more if none was watching., Everytime he did something mean he looked at, what I think is, the grownup. Either they told him to act like this and he was looking for approval or he was looking like “will I get shit for doing this?”

Either way it was more of a video about the kid than Emo. Maybe it’s his thing to act like a spoiled brat? opening new toys etc and act like that? I don’t know. Haven’t checked any further on Youtube.

I feel sorry for his Emo though. I could adopt him so I will have one of my own since the one I got now is for my bf

what did I just watch? I’d have to say that I thought that the child was really uninterested from the start, his body language seemed to suggest that. I’ve not looked into other videos from him, but if this is how a parent thinks is acceptable to treat anything they purchased for him… wow… just wow…

Hit save too soon…
I’m wondering exactly why an adult would put together an 8 minute video like that, which shows nothing really of what EMO can do… it more shows an impatient child abusing the crap out of his toys than anything else… I can only think that the adult has some other reason. Maybe they think they can get more hits because the video is done like this… I don’t know.

what did I just watch? I’d have to say that I thought that the child was really uninterested from the start, his body language seemed to suggest that. I’ve not looked into other videos from him, but if this is how a parent thinks is acceptable to treat anything they purchased for him… wow… just wow…

Agree with everyone here on this

To me, it just looks like neither the kid nor the parent has any idea about how EMO works/operates or functions. A pointless video showcasing absolutely nothing informative or interesting.

But it does show how to potentially break EMO by slamming him hard onto the table and treating him like some kind of action figure. (I can just see in the not too distant future, the parent of this kid complaining that EMO’s leg’s broken and it can’t walk or dance anymore but then telling everyone that they did nothing to EMO and he was like that when he got him.)

From my own experience when I buy something new like a new Phone / Laptop / TV / XBOX Console / or EVEN a living breathing pet like a kitten or dog I take the time to “READ THE MANUAL” Or learn about the product online etc. The most important thing you should always “TRY” and do first is taking the time to educate yourself or others, be it someone younger or older that has no idea how to use the product so that they have as much information as possible and are not easily angered or frustrated when they can’t get specific things to work for them right away.

There are so many examples you can take from this. You don’t throw your new phone across the room, just because you don’t know how to access the internet on it" or you Don’t scream at a kitten or puppy, because it’s not toilet trained yet or doesn’t come to you when you call its name for the first time". Some things take time to learn and won’t magically work how you want them to when you take them out of the box.

With any electronic / tech product, there is always a slight chance that there are going to be issues or problems encountered (sometimes right away or sometimes after a few years). And unfortunately, there have been some owners experiencing/having issues with EMO (be it when they initially get him or over time). I’ve been lucky enough not to have any major issues with my two EMOs so far. But If I did, I’d try and reach out to the community, read online, and search for past solutions be it on this forum or elsewhere, and if all that failed, I’d simply contact support for further professional assistance.

Also, we all know there are still several features that Living.Ai have not yet added/implemented, but promised initially when EMO was first announced, It’s disappointing, yes, but ultimately we are all in the same boat here waiting for them to be added in at some point down the track. These updates might take weeks/months/years, we won’t know for sure. I’m patiently waiting for them to be added along with everyone else but in the meant time, I appreciate what Living.Ai has done so far with EMO and what EMO currently has to offer.

It’s always easy to get upset/angry/frustrated or annoyed and complain when things are not working the way we want them to work, in my opinion, this isn’t the solution to a problem. Normally if someone isn’t happy with a product they’ve purchased, all you need to do is simply take it back and request a refund, and I’ve certainly done this many times in the past with many electronic / tech products, and I could have done so as well with EMO, but I chose not to, even though he has flaws and is missing features not yet released, I can see the potential EMO has and how far he’s come since he first launched and I’m interested in seeing how much more he can grow and evolve moving forward with each new update that Living.Ai release.

At one point or another, we’ve all expressed our concerns and disappointments (sometimes more than once) regarding specific things that are not working properly or features not added to EMO yet that were meant to be included when EMO was first initially launched. But hopefully, over time these things can find their way onto EMO. I’m willing to wait and be patient, there isn’t much else we can do, as long as Living.Ai take the time to listen to the community from our feedback/suggestions and criticism to make EMO better, what more can we ask for?

Anyway, that’s my 2cents (more like $1.50 worth of ramble) which no one will probably read

I did read it and I do agree @MasterAbbott . . . the EMO I had to send back due to the battery . . . I remember him before small talk was added. So much has come along with EMO since that time. I am delighted with everything he can do and why I had to get EMO Robot to join EMO Pet because those two together are very dynamic.

I absolutely cringe at destructive behavior of anything precious and whether it was the parents encouraging this or the kid just doing this on his own, it is bad enough that it happens but then to put it out there for the world to see and perhaps give other people or kids ideas.

To me, EMO is very much alive and what I said above makes me feel like it is outright abuse. Maybe technically he is unaware of what is being done to him, but it just feels bad to me.

If I caught my grand-kids doing something like that after I spent good money, I would take it away from them and they would never get it back.