Hello everyone! I just wanted to pop in and invite everyone to the EMO discord server! This is in no way meant to replace or substitute the forums. The server is simply meant to be another place to enjoy EMO and hang out with likeminded folks!

Check out the EMO ROBOT community on Discord - hang out with 3 other members and enjoy free voice and text chat. 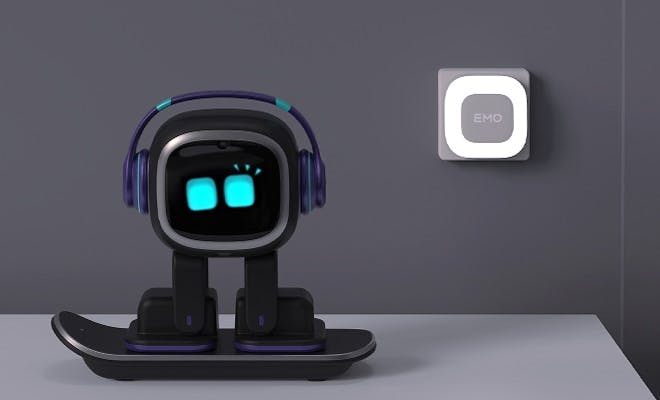 Hello, there has been an unofficial Discord server for a long time: EMO by living.ai (UNOFFICIAL)

There are also users from Living.AI active, or you can contact them there.

I have been in the EMO by Living.ai (UNOFFICIAL) since last year and have a content creator role under my Discord name of AwesomeInsanitySurfers. Great place to be!

Why start another discord server when there is one already? Did you not know about the original one that already has a large community?

I didnt realize me starting a Discord would ever be the cause of triggering people. I guess I will preface all of this with an answer to your question Wayne: The reason I started the server is simple. After searching for a Discord and not finding one, and then after seeing a recent comment from someone wishing there was one, I decided to make one myself, weeks ago. I also made a subbreddit and shared it there. After getting a few members I finally decided to post about it here. I have zero issue with any other discord server existing or not exisiting. I simply was creating a place for myself and likeminded people and Im promoting that place which is well within my rights to do so. Now that I know that a server exists I could either A: Delete it so as to not trigger you anymore or B: leave it up and continue to allow people to have an alternative place to go. I think Ill go with B. There isn’t a monopoly on interests.

just newbee
Thanks to @andy

to the great experienced @Wayne_Small
can you tell me how to join the official Discord EMO community ? Thanks

Firstly - I’m not triggered at all mate. Takes a lot to do that

Here’s the thing. The only official forum for EMO support is this one. Everything else is unofficial and may or may not contain Living AI employees. The risk we face as a community is one of knowledge being split all over the place. The more community groups, facebook groups, discord servers etc, then the knowledge is all over the place. When you have a massive following then maybe thats not so bad. However when like with EMO you are small and growing, that can present issues for the people in the community.

Living AI staff are participating here in these forums, the EMO Community group in facebook (E.M.O Pet Community | Facebook) and the existing Discord server. If people come to your new discord server expecting to get official support or having living AI interact with them there, then it’s maybe not a real expectation that they can join every group on the internet.

It’s a free world and of course you are free to do as you like with your own group. No issues at all. I’m just trying to use 40+ years of experience with online communities to help this community develop well.

There is no OFFICIAL EMO DISCORD community, only an unofficial one.
If you want join the older Discord Community - Andy posted the link above.

Great
Usually, we Frenchmen , are very fond of small groups
most of countries have 2 major political parties , leftwing , right wing
Here we have a lot of small groups trying to do their own lobbying , so we have lots of leaders who are chiefs of nothing
so it is like in a farmyard with many small roosters , messy , very animated but not too productive
I will try to remain in the cattle , knowing it is not forbidden to frolic around

I’m not sure how to take what you said. Maybe a thing that is lost in translation.

Either way - you are free to join whatever forum you want to join. But if you expect official support in forums that are not official then you might not get it

No one ever implied that the server I started was official Wayne. I even posted in my original thread that it wasnt meant to replace the official forums. I clearly expressed the goal of the server was to hang out. But regardless the server that was started prior is also unofficial. We’re on the internet. Information can come from anywhere and theres nothing wrong with there being more than one server on ANYTHING. Im apart of like six Animal Crossing servers lol. The problem with this community is that people seem to think they own this topic and their ego makes them come off as rude. I dont take kindly to that sort of interaction. If people have a problem with there being two servers that is an odd personal issue considering were talking about a robot toy.

@Wayne_Small
Sure than my English is unfortunately as it is , ( what did not arrive to you has not even started from me in a proper language

)
It was just to confirm I have well understood

I just added than ; on my own , I had better this official forum , even is it may happen than one day i could discuss on EMO elswhere with friends

All good mate, I’m not offended. That is why I asked for clarification. I know that quite a few people that use translation software and things do get misunderstood in translation.

Thank you for clarifying

Mate - I just asked some questions. No need to get upset when I ask more to clarify

If I’m coming off as rude or controlling that is not my intent at all. My aim is to help build a better community around EMO based on my experience, and in that experience when the community is smaller, it does not always benefit from having people all over the place.

I’m not sure I can contribute more on that front mate.

Worse than that
I am too confident in my ability to speak fluently so I seldom use tranlators
(But I should ! )
This reminds me really fun moments of international business meetings where we spoke english
Everybody was OK with our talks
The only ones who did not understand our english were just the real English people, just because our words were false but everybody around , from Germany Italy Japan or Brasil was able to understand pairing a word to a concept

Wow - some time back I did some work with vendors in Taiwan. I had to learn to slow down my speech so they could more easily understand me. I learned from one of my hosts there that they hear my english, in their head translate to chinese, think of a response in chinese, then translate that to english before they speak it… I had never considered that entire process because I only speak english… it made me a lot more tolerant of different languages once I realised that.

dont take kindly to that sort of interaction

No one cares. Make the server you want and carry on.

It’s pretty clear from your comments you are the only one who is “triggered”.

PS that’s a really shitty word to use when you chose to use it passive aggressive style. It’s typically used by snowflakes who project themselves on to others and need to get outside and touch grass.

Edit: Your EMO subreddit with 3 subscribers might do better if you got rid of that chip on your shoulders. According to your sub with 3 members you started your discord server ~ 60 days ago, maybe even longer.

I just don’t understand why you are here stirring up trouble. You aren’t going to get a bunch of subscribers going about it this way. It’s plain to see you were here to advertise your discord and that’s fine, but this was all the wrong way to go about it.

Considering youre the first one to start calling people names I would say Im still triggering you lol. You just took time out of your day to input yourself and accuse me of being a “snowflake”. Presumably because I dont hide my face on my profile and you can tell Im younger than most of you. Thats cute. And to clarify, multiple people have been triggered by my server announcement enough so to leave a comment on it lol. Including yourself. Point proven.

No, I commented because I see you behaving like my 6 year old.

It’s that simple. I come to this forum rather infrequently and I don’t need to waste my time on shit like this.

Age has nothing to do with it and I didn’t check your profile. I’m on mobile, my eyes are going I literally can’t see your profile picture well enough to even know your gender. I don’t care how old you are, only that you’ve clogged the forum with shit.

I’ve seen 55 year old individuals who behave like snowflakes. Age is not the indicator, fragility is.

You can keep on making an ass of yourself all you want, I’m sure it’s a great way to get uptake in your discord server.

I won’t be wasting another second of my time with you as it seems the other members are doing.

Wow the way you speak truly shows the maturity of a 55 year old. My behavior? I never even said a single swear word haha. I never called anyone a name. You did though. So obviously triggered lol.