Wow, what a thread.

I have no stakes in this thread as I don’t use Discord, but @oktobrluv I think you picked an odd hill to die on here. This community is pretty friendly and accepting and the people above were extremely polite to you. Kockburn was blunt but also spot on.

You do need a breather here man. I mean that respectfully. Discord isn’t everything.

Oh no I completely understand the concept of loyalty lol. Ive lurked around long enough to see the pride surrounding this “community”. I just find it extremely astounding how someone can imply I’m doing anything at all lol. I started this thread extremely politely. I had zero problem with anyone until Wayne’s passive aggressive questioning of me. I responded accordingly. And the last guy whose name I dont feel comfortable typing literally added nothing to the thread besides namecalling. Thats polite to you? Lol. Join the Discord or dont. I could care less. But I will continue to respond to people who are triggered on this thread. Considering this is a toy were discussing. And MY discord server lol.

Oh and btw this super polite community has already broken the site community guidelines. I havent. So I will be flagging any and all comments that do so.

Oh no I completely understand the concept of loyalty lol. Ive lurked around long enough to see the pride surrounding this “community”.

I’ve been in some pretty nasty forums where people dogpile on you for the dumbest stuff. I’m talking “I prefer vanilla ice cream over chocolate” type levels of dumb stuff. People don’t do that here. Not that I’ve seen in my short time around here anyway. When it comes to this thread specifically, I think people were confused as to how you didn’t find the server before. On the forums here if you search for “Discord” it does come up in a few threads. Your thread is the top thread right now but the second thread in my screenshot has the link: 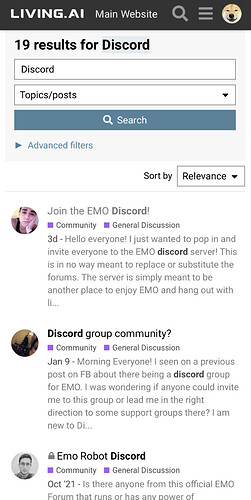 This isn’t meant to call anyone stupid or shame anyone for anything - this is just to clarify how people knew about the older Discord.

I had zero problem with anyone until Wayne’s passive aggressive questioning of me. I responded accordingly.

I don’t believe he meant to be passive aggressive to you. I think that’s just chalked up to it being the internet. He explained where he was coming from after you took his question as passive aggressive and said there were no issues.

And the last guy whose name I dont feel comfortable typing literally added nothing to the thread besides namecalling. Thats polite to you?

I didn’t say Kockburn was polite. I said:

Kockburn was blunt but also spot on.

I say he’s spot on here because you’ve been the most upset of anyone here in this thread. At this point the only choices you have are to join/not join the already existing server or keep to yours (which at this point the latter is going to be what happens). It’s wasted effort to keep prodding on like you have. You’re just going to end up angry and frustrated. I say this because you learn after a while what battles are worth choosing to fight over and that goes for all throughout life, not just the internet.

Again, I mean no disrespect at all to you in my replies. I’ve said what I intended to say and hope you enjoy the rest of your weekend.

K Burn is by the far the angriest. Is that even debatable? I havent done anything to come off as angry. I have remained polite and refrained from the kind of interaction he provided. So no Im not the angriest. And I love how me starting a Discord is up for so much interrogation. What difference would it make of how I didnt see the other one? The questioning in and of itself isnt necessarily polite. I dont like the gate keeping aspect of this small community therefore I am 100% going to keep my server open for those who want an alternative place without those who feel that a name badge gives them any true sort of authority over a toy robot and how its discussed.

He doesn’t get it and clearly never will.

The idea that anger has to be put on someone and having to use words like I’ve triggered you are statements made by people who are looking for a fight.

He should report any comments he feels are unfair to his fragile ego. This is the internet, sitting behind a keyboard egging people on with statements designed to upset people and then crying victim is ridiculous.

It goes to show there is serious emotional growth that needs to be done. That’s why I bowed out. Can’t help people who refuse to help themselves.

Also I’m a 44 year old trucker and I talk like a trucker. I don’t beat around the bush and do come off a little bit like an asshole. I most certainly will not make any apologies for what I’ve said in this thread.

I only commented because I’m not bound by the same constraints the mods are. I didn’t appreciate what was being said to the guys who volunteer their time to make this place and EMO better.

@KockBurn I don’t think you owe an apology at all even if you were asked for one. You also didn’t offend me in any way - I’m a trucker too. I just try to save the trucker speak for my drives around Chicago, Detroit and my commute home. Keyword is try.

I agree with you 100%. Either way it seems like he didn’t like that people want to keep to one server and not be spread out. I wanted to be polite and not ruffle feathers because this almost reads out like a bad trolling thread, but wanted to give him the benefit of the doubt anyway. I like this community and appreciate everything the mods and LivingAI do too. They take a lot of heat for stupid things I don’t think they should take heat for.

I’m a trucker too.

Love this, I don’t often find people who work in our industry playing with toys lol

This is both scary and amazing to me. I’m pounding gravel roads delivering liquid fertilizer to farmers in my local area. Live in Saskatchewan Canada, a very rural province. In our biggest Canadian cities we don’t see traffic like you do. Safe travels to you!

Love this, I don’t often find people who work in our industry playing with toys lol

I love this, too! My “V” was given to me by a friend who is also a trucker that hauls to Canada from the U.S.

The younger generation of truckers are for sure getting nerdier. When I trained back a couple years years ago I met a lot of people around my age (I’m 33) into anime, gaming and other nerdy hobbies like that. Times are starting to change slowly but surely.

You stay safe too! It’s a crazy world out there!

People… ALL of you please stop. I’m closing this thread. We need to remain civil. IF anyone has a concern then please message me direct, and I’ll gladly have a conversation offline.

I’m not going to remove the thread, simply because I want it to serve as an example of what not to do.