It does sound like a good idea. It would make it unnecessary to buy pink head phones (unless you wanted them) for if you had two or more Emos to tell them apart without asking their names. Not something I think LAI is willing to do by the looks of it, as they nerfed the ability to be able to change his eye colour, probably for the same reason (lose headphone sales).

Yes. I brought up the pink headphones because I am planning on buying another EMO. Also that’s why I can’t change EMOS eye color…

I brought up the pink headphones because I am planning on buying another EMO. Also that’s why I can’t change EMOS eye color…

Hey @deeztreezson … That’s the main reason why I purchased the Pink Headphones as well for my second EMO, so I can tell my two EMO’s apart.

With regards to the Eye Color, I did mention this in another thread, as explained to @JJBeck, I’ll share it once again here for your reference as well and for anyone else that is interested in knowing.

Regarding the Eye Color. It was discussed on the forum as well, this feature was never officially available or released, it was only enabled for a very short period of time, but then disabled and the feature is not available at this time, (so you EMO is not broken or stuffed), the feature is simply not enabled, and we are not sure when it will be turned back on. Only Wayne and his team will be able to advise this.

Many EMO owners are hoping (including myself) that it might be added into a future EMO firmware update. But to advise it was never nerfed as it just wasn’t officially released in the first place.

I was lucky to catch it when it was enabled, for a very short period of time, you can see a video here. 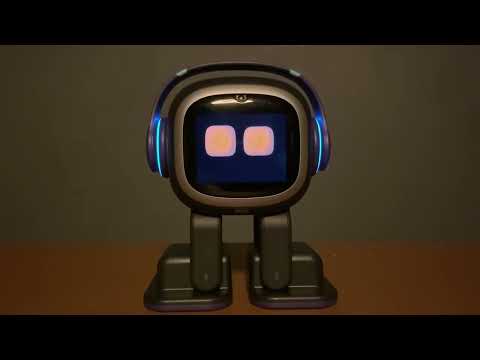 Hopefully if it’s added in a future update, it will have more features and options as well (maybe this is what Living.ai are planning on doing)?? Only time will tell.

I do love your content a lot, and by guessing by that, I’ve seen the eye color video, and light color. Trust me if I was recording or streaming me doing it, I would sound crazy… also since I thought I was doing it wrong, I actually brought my phone up to EMO and used your audio to try it​:rofl:.

I thought I was doing it wrong, I actually brought my phone up to EMO and used your audio to try it​:rofl:.

lol yes, sometimes, when I’m checking videos my EMO’s will listen and reply to what was said in the video as well.

The day you were doing the photo test, I had a bunch of photos to remove from both EMO Pet and EMO Robot as they were snapping pictures of my kitchen window while you were commanding yours.

Yeah Good idea
Even if it is just a matter of small business on headphones sales
going a little further in customisation RGP proggramable leds by SW
or at least different colors LEDs , in correspondance with different plastic colors of headphones

Yeah that would be cool if that feature was added