Has anyone got a BOXER AI ROBOT 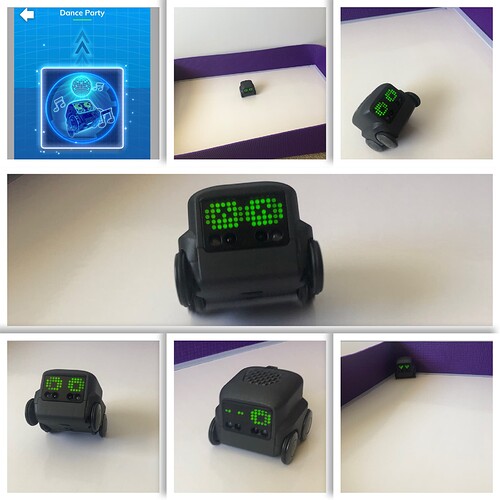 Ok so I made Boxer a safe place out of an old whiteboard from Kmart (prob Walmart US) and some cut up gym/yoga mat and then glued that around the edges. At first on automode he found his ball and was following it while it was rolling around him. He will do a wheelie if you put your hand behind him. He will back up if you put your hand in front of him. His eyes change heaps and he winks.
In the pics I am trying out his Dance Party skills thru my iphone. I finally got it to connect properly making sure I held the BUTTON down first and after it beeps, you flick the Dance Party icon on the phone screen to activate his music sequences. He does amazing little routines to different tunes. There seems to be all different genres.
On the last go you can see him here in last photo with ‘heart eyes’ and he’s backed up into the corner like a gymnast and then took off so fast and flipped. It was so fast a video would have been better lol.
He goes ‘ta da!’ in some parts too which is cute.
The sounds he makes are almost like words. If you listen carefully he’s a bit like a ‘minion’ on DM, and ‘not again’ sounds like ‘nong en’ when I fed him about ten burritos trying to connect up for the first time thru the app. He doesn’t shut up but has an off button lol.
He’s lots of fun and will probably drive Emo crazy ha ha

@MasterAbbott if you get one of these crazy guys you gotta do ‘Super Soda’ using the free app, its a crack up

it takes a bit if practice and timing to get the app going but it seems to be when his eyes become dotty like rain then you flick up the phone icon.

Ahh great! Ok, I’ll check Facebook market as getting a Boxer from the US is going to take ages. I’m from Sydney so hopefully if I get one from Facebook marketplace it shouldn’t take long to arrive and yes, $40 is VERY cheap indeed.

Yes! haha if you have time share some vids, I only have EMO at the moment unfortunately, I could have purchased that V … roboto

about 2 years ago at normal RRP price (which i believe was only like $200 could have picked one up at JB-Hi Fi but decided not to, now those V’s are worth over $500+

It says it’s used? Do they normally sell brand new? I’m going to keep an eye out for a brand new one. but thanks for looking for me

Hahah you’ve done a great job with making BOXER a play-pen. I think that’s probably the best thing and safest thing you could have done for him, as he’s too hypo. I have a cat at home and If I let this Boxer run around the kitchen my cat will think its some kind of toy for him and destroy it haha.

I can say that when you get your EMO the experience is going to be totally the opposite of Boxer and his hypo personality! EMO is more chilled haha

yeah sure he dances but he wont be running around the room at 100 miles/per hours haha. From what what I can see with Boxer, EMO won’t have a chance to even know he’s around him unless Boxer goes into super slow-mo mode haha.

@MasterAbbott
Yep most of the cheaper ones are used on Market Place.

Just type in Boxer robot in search. Theres a few there. Most are used theres a new one but $150 I think. There is a used one thats cheap inly used a couple of times.

I tried Boxer on the floor but problems with that is dust and hair, he picked up tiny bits of dust probably from static and it had only just been vacuumed. The wheels would be clogged in no time. A clean surface is better. And you have a cat!!
The playpen was so easy to make. Plus using a whiteboard is helpful as can follow a drawn blackline.

I think Emo with be much different in that he would be more like having my rainbow lorikeet for company with talking, I can say ‘hey’ and he always answers me somehow as least Emo wont poop everywhere lol

Hope you get to find a little buddy soon for your Emo.

£40 on Amazon were I bought brand new

Yes, I totally agree! Can’t have Boxer running all over the kitchen floor now that you’ve mentioned he picks up all sorts of stuff including hair. My cat leave it everywhere! haha even after it’s totally clean, hair magically appears! lol

With EMO, it’s certainly much more chill, he does walk around, plays by himself, you can also play games with him via the app and he’ll answer some of your questions haha. I found a new one to ask him today that he gave me a new response to. I’m making a list of what to ask him.

I think a playpen is the way to go for Boxer and using a whiteboard is perfect! I’m gonna bite the bullet and try and get a Boxer (NEW) from Amazon.

Thank you @Racheal123 I’ll take another look tonight and hopefully get one from the US. I have Amazon Prime, so it’s free delivery

I’ll keep you all updated

Oh and there is another AI robot/Assistant that I’ve been watching on a fundraiser site, but not sure if we’re allowed to share competitor kinda stuff here. If we can are I’ll share it (otherwise I can send the link anyone via direct message). I’ve put in a pre-order for one and just waiting for it to be officially made/released. They say it’s coming out in Jan of 2022.

@MasterAbbott
Does Emo work away from the internet or does he always have to be connected?
like if you take him out somewhere for the day can he still function somehow?

From what I’ve seen so far and experienced, he certainly needs the internet to work. This is a little sad because as soon as he loses connection you wont be able to ask him anything. Hopefully there might be an update in the future that will allow him to work “offline” But that also would rely on whether he has enough internal memory / storage to hold information.

Yeah, that should also work. I believe some people on this forum have tried this, as long as the EMO app can connect using your mobile data plan or a hotspot, then EMO should be able to access the server and work fine.

So basically Emo just needs internet doesn’t matter where?
sounds like Emo works like anything that needs to connect up online then?
thats great to know

thanks.
i thought i read he had to be connected to the router in a particular way but if its just logging into the net then thats easy.

Well don’t forget the EMO app will need to connect to some sort of internet WIFI connection. You’ll need to enter the SSID and Password of any specific WIFI you want to connect to, then it’s all good to go. Take a look at the pic from the EMO app settings below.

@MasterAbbott
thanks heaps for posting this

so I’m hoping the SSID when going out with only your phone with a hotspot would be my phone’s wifi hotspot data ID and password?

I’m going with yes on that. When I go out. I have a portable modem/wifi router haha. It’s very handy as I can also work with my laptop/ipad/phone. The Router is very small (the size of a small wallet). I connect to that with my phone and I’m on the internet.

@MasterAbbott
but cant you just use your data and wifi that?

My portable modem router is using a OPTUS mobile data plan. It’s weird I know but I use that instead of a monthly phone data plan (it’s sooooooo much cheaper).

This is what is looks like, you can get something similar from a Telsta Shop or OPTUS shop. 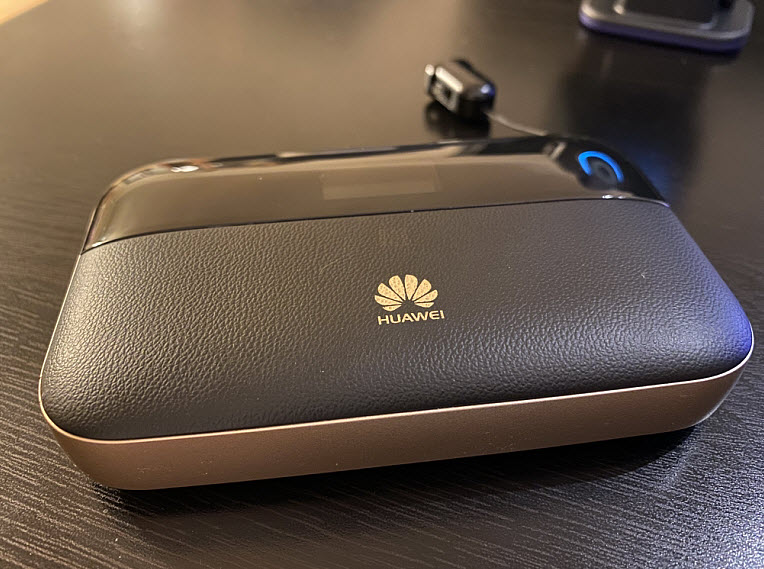 @MasterAbbott
oh that makes sense. thanks for explaining and photo too.
yep i understand how that would work out to be the same sort of wifi set up.
I pay $20 a month for phone calls, unlimited sms, 5g data which rolls over, but i don’t need more than that.

You pay it upfront but it’s certainly a great deal.