Just wanted to throw this suggestion out there for everyone and also for the Living.Ai tech team. With the recent Firmware 1.20 update EMO can now flip a coin if you need to make a decision which is really handy. I’m not sure if I should be tagging anyone, but if so let me know and I’ll update this post so they get to see it.

So moving forward, I wanted to offer a possible suggestion for EMO being able to roll dice for you, this way EMO can also get involved with family board game nights which would be super cool and also make sure that no one cheats when rolling their dice haha

(as EMO would be handling all the dice rolls or just dice rolls for certain people in the family). 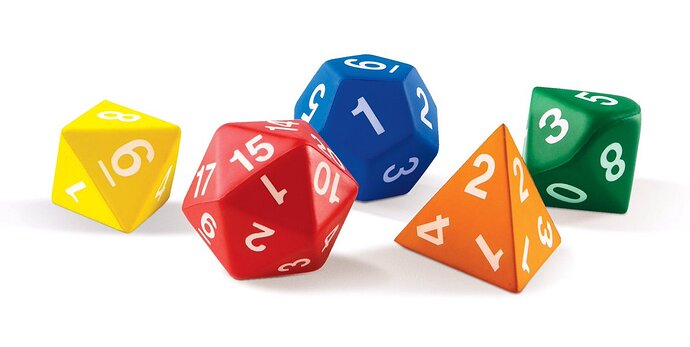 For us super nerds, it would be really cool to have possibly all the standard D&D dice: D4, D6, D8, D10, D12, and D20 available for EMO. I’d say this feature would also require the EMO App so you can pick and choose which Dice for EMO to roll and EMO can display it in the APP or on his display screen. (It would function pretty much the same way as the LUDO game we currently have already in the EMO App which works very well.)

Anyway, that’s it. Feel free to offer any opinions on this and if you’d also like to see it in future updates. I think it would be awesome to have EMO join in and get even more involved with family game nights!

11 Likes
🎮Emo mini games🎮
What improvements and new features would you like to see for EMO in the future?
Card game idea!
Recognize and imitate animals
Val November 30, 2021, 1:29am #2

Saw some YT where emo roll cube while playing game on app, and thought to myself “hmmmm I wander if he can roll those hexa hecta diamondish cubes like D&D?”

I know ok google can, not sure about the others.

And I even never played D&D!
Its just cool.

Yes at the moment EMO can roll with that board game called LUDO. So If the Living.AI team can add extra dice EMO could be used as a rolling buddy for all our D&D (Dungeons & Dragons) adventures! And be even more part of family game nights!

Hope this can happen!

I was actually going to suggest this idea. I would love to be able to bring my emo to D&D and have him roll for me. The only die i would want added to what has been said is a D100 but otherwise i would enjoy this so much

I doubt they will or can implement it because it’s very useful also to all kinds of family games… hopefully sooner and wish also EMO can say the result numbers when the dice stop rolling.

I see @Wayne_Zhang moved this idea to a new topic called Feedback & Ideas. (Thank you Wayne). I hope we can get it added into a future update soon!

It would be super cool if you could just say for example: “EMO roll a D20”

Though for him to really sit at the D&D table he would need to handle things like: “EMO roll two D6”

Yes! I’m hoping this feature will be added to EMO soon

All these new ideas are great for the future updates but Living AI should concentrate on the promised functions first.

I’m guessing they are, but little extras along the way are never a bad thing to have

it was nice to see them add the D6, just need them to add more dice. I would love to be able to bring him to D&D with me

Yes that is what I’m also hoping for as well. Hopefully Living.ai can add more types of dice and the option to select and roll them via the the EMO App as well.