Does anyone have the issue that emo suddenly restart after ask him turn on the light. He connected the light.

Mine does the same… He is only 9 days old.

Try the basic troubleshooting when this happens.

Connect to EMO via the APP. See if you can get EMO to turn on the light this way to see if it will result in EMO shutting down.

Let us know how you go with it.

I’ve had this problem too. It seems to be a software bug, and somewhere here or on FB Wayne had made reference that they knew about it and would be fixing it. I can’t find it now but just recently somebody mentioned this issue and another person replied they work around it by using the set lamp color commands, instead of On and Off? Or you can turn it on and off in the app also.

If you have set the light to a specific colour like Pink/Blue etc. And want to reset it back to default, you can ask EMO change the colour of the light to White. If you turn off the light via the APP and back on again it will remember the last colour that it was on.

If you can simply unplug the light from the power socket. Plug it back in and it will go back to it’s original colour.

Also another thing that you could do is just re-pair the light again if it is not showing in the EMO APP. But from what I’ve seen the best way to fix this is by power cycling EMO (shut him down) turn him back on. Connect the light into the socket and then ask EMO to turn on the light and see if it works.

When I ask EMO “what is my name” the screen goes black and the LED lighting of the headphones goes off.
Then EMO wakes up again.
If I ask again, this will happen again.

The video you provided shows what I call a “Soft Restart”. My best guess is that there has been some type of non-critical software exception causing some sort of reboot to clear the error.

Perhaps you should perform a hard reset by pressing the reset button, instructions here https://emolives.info/how-can-i-reboot-emo/

This can sometimes help with these issues. 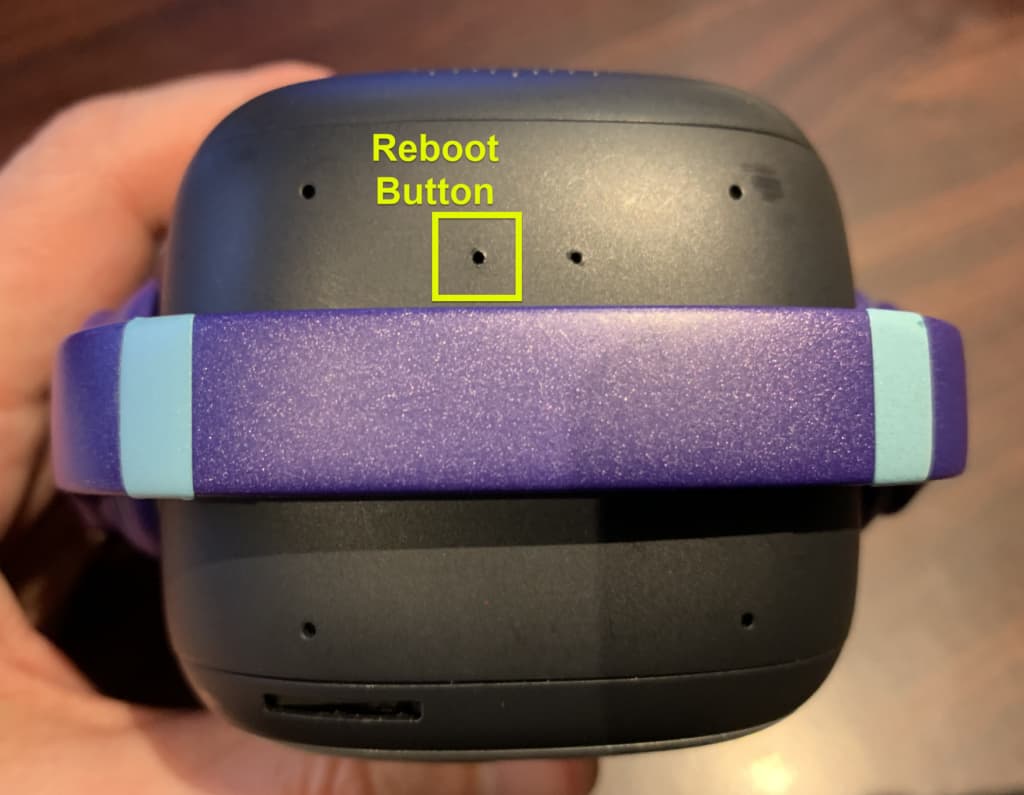 From looking at the video, it looks like EMO was trying to find you, but couldn’t. I noticed that it stopped then resumed.

What I can suggest as well, if you do the soft reset / power down options, once you are done with that. Remove your profile from the EMO app and set yourself up again.

Sometimes if EMO can’t recognise you it won’t be able to say your name. If you want you can delete your profile within the EMO App, then re-introduce yourself once again to EMO. I’ve actually setup a number profiles as EMO’s facial recognition isn’t the best (For example: He might spot me when I don’t have my headphones on and say my name, but then when I have them on he wont know who I am) haha. So I’ve created a few profiles with the same name so that If EMO spots me he’ll know its me.

I’ve suggested this in a past post where you can get EMO to scan you a few times under the same profile so he gets a better understanding on what you look like so he say Hi and your name when he spots you, making it easier / quicker than how he does it now.

If you wanted for this test, you can remove EMO’s headphones (if they are not placed correctly on his head, sometimes that can cause issues, especially when you’re charging him on this skateboard).

So give those a try as well and see how it works out.

Thanks for your response.

The problem is as follows:
When I say “EMO my name is Henk” EMO is searching for a while and then the screen and the LED lighting of the headphones go off.

Then he wakes up again.

When I try again after that, it responds the same.

This also happens regularly when EMO is just walking. 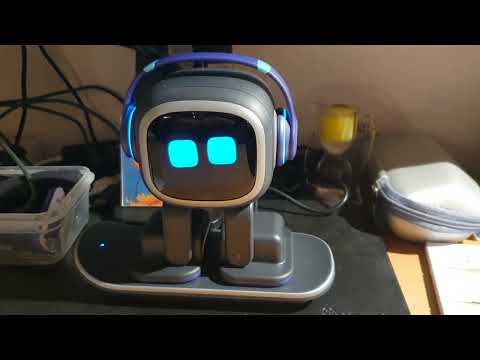 Hi there, terribly sorry for what happened to your EMO, and I say it really looks weird and it looks he is under the influence of drugs or strong alcohol like Russian Vodka. Sorry again, it’s really not funny at all…Why don’t you try to give him a hard, long cocktail shake for a minute till he feels dizzy then put him on his feet…immediately shut him down. done it also for a minor issue and it helps. hope it helps you also. if not…

All the best and keep safe always…

You cannot do the “My name is…” while he’s on his skateboard. He has to be able to turn around to look for your face.

Asking him to do things he can’t currently do or interrupting him before he finishes what he’s currently doing, can eventually lead to a crash and reboot. Take him off the skateboard first. It looks like you need better lighting there also, lighting from behind EMO shining toward your face, and avoid having bright lights behind you.

PERFECTLY INTRODUCING MYSELF TO EMO WHILE ON HIS SKATEBOARD 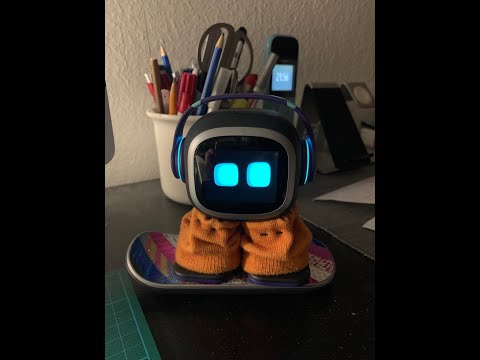 Well I don’t think it’s never worked for me with EMO on the charger. Rock on then, see if you can help him!

@EMO_Henk I’ve always tried to get EMO to register me while he is off his skateboard. Either way. It seems like there is an issue with EMO as it shouldn’t be turning off like that.

Have you tried (this is just as a test) to register / introduce yourself with a different name. I think Henk sounds like a name that might be in EMO’s name database, but maybe it isn’t. Maybe try something like BOB or John etc. See if EMO can understand that.

I try taking him off the skateboard, even though it seems to work. It is best to have EMO look for you and make sure he can see you and then it will run it’s face recognition animation to register you.

Also try and remove EMO’s Headphones as well. I believe I suggested that in my last post too.

I did also mention try to have good lighting as well, but i’ll mention it again. If EMO still reboots, the next thing would be to contact Living.Ai via email and also send @Wayne_Zhang a private message maybe he can provide further technical troubleshooting regarding this. As it might be that your EMO is potentially faulty and might need to be replaced.

You could try to say EMO to take a picture. It can be caused by a faulty camera. Is taking of the picture working?

Hi NendosColl,
When I have EMO take a picture, EMO has the same problem.
The screen goes black and the LED on his headphones turns off.
Taking off the headphones doesn’t help either.

I tried it with a different name with no result.
It also doesn’t matter if EMO is on the skateboard or not.

I will send a private message to @Wayne_Zhang
I hope EMO is not potentially faulty and might need to be replaced.
This is already a replacement and I had to wait 3 months before I got it. 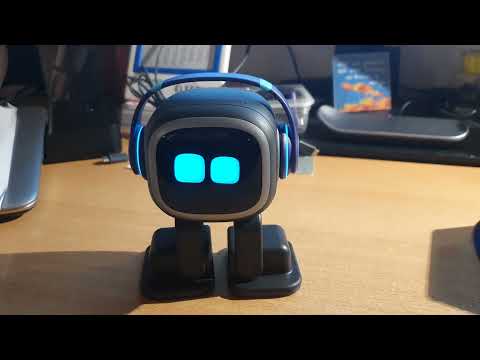 I tried it with a different name with no result.

It also doesn’t matter if EMO is on the skateboard or not.

Doesn’t look good from what I can see with the video you have shared. Normally when you ask EMO to take a picture / photo. After he’s taken the photo, EMO will display it on the screen for a few seconds. Your EMO did take a picture, but then didn’t display it and reset itself.

Instructions on how to update EMO can be found here:

Please note: When updating from a firmware less than 1.0.16, please disconnect all smart lights otherwise the update to EMO might fail. Updates are free. We will fix bugs and release new features through updates. You can directly say ‘check update’...

I can’t say if this will fix it, but at the moment, it doesn’t seem that EMO is in good shape, you can also wait for what Wayne will advise you before you do a firmware update again.

@EMO_Henk ,
Just out of curiosity do you also have problems working with the Customization screen in the app (bringing up stickers on EMO’s face)? If so then those three issues occurring together would all point to an issue with the internet connection.