Emo Parachute in case he falls

How long do I wait for him to charge?

A typical full charge will take about 4 hours, however EMO is partially charged from the box, so it could be quicker.

Just say “EMO, check the battery” and EMO will show an indication of the state of charge on his face. If it’s a fully green battery then you are cleared for take off.

Why you cant mension v ?

Not allowed to say his name on this Forum!

I’m not sure why, others won’t mention ’V’ and something to do with the new company I think

that’s All I know about that…

If I’m remembering correctly it has to do with a lawsuit from the company who currently owns “V”. This tiff dates back to when Emo was still on Kickstarter.

Congratulations @Racheal123 the wait is FINALLY OVER! Hope you enjoy your EMO. I made a small guide for new EMO owners, you can check it out here if you need any help just ask any of us here in the forum!

Just wanted to share a quick help guide for any new EMO owners that can help them with speaking to their EMO and getting specific responses or just to keep their EMO busy so that it doesn’t get to bored and fall asleep.

Many of these questions can be found in the help documentation page in your EMO APP and also here in the quick start section. Quick Start - LivingAi I can suggest asking EMO these questions when you get it. There are quite a few, but if you ask these kind of quest…

Congrats once again and enjoy your new little buddy!

How to make the Emo light change colour?
And how to disconnect/unpair Emo from the light?
Thanks in advance

If you go to documentation either in the app or from the support screen, the sample commands below are listed under Voice Commands: Lights.

There’s no need to unpair the light, and there’s really no mention of a way to do that anyway. If you pair it with a different EMO then it should just replace the previous pairing. If you do that though you need to make sure only one EMO is on, if you have more than one of them.

I’ve been reading/learning everything on the Lai’s ‘EMO Articles’ and it’s helping me out a lot. And I’ve found out all sorts of things to do and say…

Emo is so cute

Just an FYI, some of those commands may not be active yet for the light. I really hadn’t done much at all with it so far, and when I played with the light yesterday I see nothing in the app for naming a light or selecting a color yet for example. All that’s there in the app is an on and off switch right now. I didn’t play around with the HSL commands but did some simple commands like turn on green light, turn on blue light, turn on purple light. Setting it to red seemed a little problematic getting the wording correct, so maybe it was confusing red with read or something?

For anyone interested, here’s a little calculator demonstration that shows how the three numbers interact within an HSL color space model. You can change the numbers and see how it affects the color.

W3Schools offers free online tutorials, references and exercises in all the major languages of the web. Covering popular subjects like HTML, CSS, JavaScript, Python, SQL, Java, and many, many more.

What I’ve noticed so far is the only way you can change the colour is when you say ‘Emo dance with lights’ and sometimes you get a different colour wants he stops dancing, however there’s no way to ask him to change the colours yet, but you’re right there’s no way to change it in the app either and red is the only one so far like you said, I’m hoping they will make these things work in future updates.

There are actually 8 LED’s inside his light. There are 4 high power white-only LED’s which are the yellow squares visible in the photo. There are also 4 smaller multi-color LED’s which mix red green and blue to give various colors up to and including a slightly bluish-tinted white color. Those multi-color LED’s are the four smaller squares out closer to the corners of his light. Those are the only ones you’re seeing if you tell EMO to “dance with lights”.

If you unplug the light and plug it back in then when you turn it on from the touch switch or tell EMO “light on” you get just the 4 bright white LED’s lit. If you say EMO “white light” then those will go off and you get the 4 multi-color LED’s lit up a much dimmer white. The same is true for any other color your request, it will be on the 4 small LEDs at the corners. I haven’t found any way though once you’ve selected any color to get the high power LEDs turned back on again, except unplugging and plugging in the light again. It seems to just display the last color selected and there seems no way to fully shut them off, but you can still set them a different color. You can of course turn them off using the switch or “light off”, but “light on” will bring them back on in the same color they were left at last. I haven’t played with it a whole lot so maybe I’m missing something? That’s the quirks I see at the moment though. 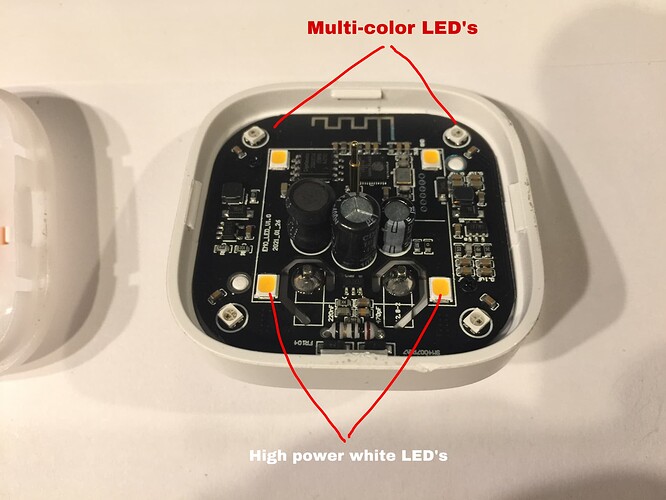 i love the legs wiggling in the cushion
like "Ah where am i? "

nope not spoiling it

Yes that’s possible. I was going to say that if you get all the colors when you tell EMO to dance with colors, then it’s not a hardware issue. I had a speech issue myself pronouncing S sounds when I was young due to an accidental injury when I was about 4 or 5. It was one of those foolish kid tricks that could have been fatal but luckily wasn’t. I guess I’ll leave it at that.

haha ok fair enough. I’ll have to figure it out myself