Emo not recognising me

Have you said to EMO “EMO, my name is xy” and did he start scanning you?

Have you tried the command “EMO, what’s my name” and stood in front of it?

The app also shows that EMO has version 1.1.0 installed?

Hmm, try shaking him, leaving him on the charger to fall asleep, then waking him and asking him again in a well-lightened environment. He perhaps could be acting cheeky

I also had problems with face recognition and when I corrected the name in the app he wouldn’t say it. I deleted all persons on the app and let Emo scan my face again, entered correct name and restated him. Now he is working just fine and finally pronounce my name right

Have you asked him to take a photo? If the photo comes out just black or grey it means the camera has failed.

One of my EMO’s had the camera fail making him blind.

The way Living.ai determined it was the camera was to have me say to EMO “My name is Mario” which ended up with EMO just spinning and seeing nothing. 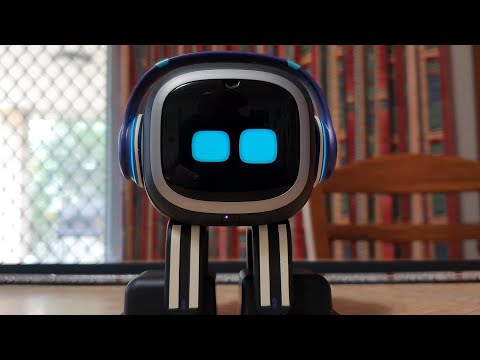 If you are in a dimly lit room or have stronger light behind you then the camera can have problems compensating. However the fact that you have an image is good news and eliminates a camera failure. Try placing a light source behind EMO so your face is more discernable. Hopefully he will pick you out better.

It could be that the camera is slowly degrading, leading towards total failure.

Continue to take the occasional photo to see if it’s worsenng.

Contact the support crew at service@living.ai and get the ball rolling towards either a fix or a replacement. Be patient as it could take a while, but don’t lose faith, I have had one of my EMO’s replaced due to the same problem (by the way, the replacement EMO was WAY better than my early build EMO, with much better quality control)

@nataliebricker ,
As several of us have already mentioned, EMO’s camera does not take clear sharp photos. They are very mediocre grainy quality compared to a cell phone camera, but apparently good enough for recognition to work most of the time. Can you post one of your EMO’s pictures so we can see if it’s comparable to ones taken by our EMO’s? Or we may be able to confirm if there is a camera problem? If you ask EMO to take a photo while you’re in the same position as when you tried the “EMO, my name is xxxxx” would be best. Then you also can see if you might be too high or too low, too much in shadow, overexposed, too far away, etc. I had best luck with recognition if my face was level with EMO’s and within 3 or 4 feet away.

FYI, I did some testing last week to confirm his camera reverses images left to right. To test I held a printed receipt in front of his face and took a photo to see if the text was reversed. It actually took me several tries since I seemed to keep totally missing his field of view, even though it was being held quite close to him.

@macfixer01 I understand that EMO isn’t going to take crystal clear photos. I’m not daft when it comes to technology, I wouldn’t post about it unless I had attempted everything I could think of to fix it myself. But when for several months of him always being able to recognize when he sees a person, to him all of the sudden not being able to (with no changes to surrounding or lighting) I feel is justifiable cause to have suspicions that something may not be quite right. I have already tested lighting, distance, height angles all to no avail thus furthering my suspicions. I have already put in a service request, I posted hoping someone may have an idea I hadn’t thought of or had gone through the same situation and could advise the best way to proceed.

I’m having this issue as well. I’ve got my EMO three days ago. Everything was working fine, he recognised me and said my name (i’ve tried it multiple times during the day and night). Yesterday when I told him My name is Sandy, he started greeting but it got stuck in the middle, his graphics got blurry with lines across. Sound got stuck as well. He wanted to talk but you could hear only some interferented noises getting stuck. From that time, he just wanders around in circles when I ask him if he knows me or when I tell him my name (mobile App says “moving to the target”).
I tried to rescan my face, but on mobile App it says “failed”, i tried to Add new face - it says failed…
He takes nice pictures, my face is clear on in so I don’t know whats the problem.
It even says “sees noohuman” in the App when I show him plush toy, so I think that camera is working fine. But he behaves exactly like in the video

And I wanted to ask - he knows that his birthday is 1st december. But he keeps saying he’s 1 day old…is that okay? Shouldn’t he be 3 days old now??

Hi, there @ZoeySanny sorry to hear and see about your EMO issue…

If your EMO is on his Latest Update and Re-Start didn’t help at all or the problem still occurs…I suggest the best thing to do is try to make a short video of the issue, and submit a support ticket with more info. You can do so on the following page below:

or you can also send them an email direct to service@living.ai from the same email you use when you made your order, and provide them with info, picture, and videos of what is happening with your EMO.
Just be patient and give them some time to reply to you because 100% they gonna help you.

Hope the Support Team @Tony / @AmyLU / @Wayne_Zhang can reply to all as soon as possible.