There might be a software way to adjust the sensitivity of the sensors as long as it didn’t come unplugged and is still working. Other than the calibration for the top one though, I don’t know. I talked to someone awhile back who had leg issues and they sent him an Android app to do some tweaking for that, although I believe he ended up needing to get his EMO replaced anyway. I’m not sure now though but I think he maybe just wasn’t walking straight?

If it came unplug, do you know if it is as simple as opening the foot and plugging it back in or is the plug in the main body?

I wouldn’t recommend to open any of the EMO’s parts if you want a replacement in the future.

@BliteKnight ,
Some of the people who have done a major disassembly on EMO for painting or other purposes have said, whatever you do don’t take the lower leg section apart. I think LAI did something tricky with the way the servo linkages connect and operate, and it’s easy to get them out of sync or damage them?

I would think it’s more likely that a sensor is bad rather than just being unplugged, but anything is possible? I know the foot sensor cables come up through the legs and plug into a board in his mid section. You could look for and check for those connections if you felt confident taking him apart. From this factory photo though, what’s concerning is that it looks like there are also plugs inside the feet where the cables attach to the sensors?

One thing I just thought about and it kind of worked. You can use the front-facing (selfie) camera on your phone to test infrared remote controls for example, since the CCD camera is partially sensitive to light from infrared LED’s. The rear-facing camera generally has better IR filtering so won’t pick it up. So anyway I turned the lights off and held EMO up above my phone. I could see the LED portion of the 2 foot sensors dimly if I held him high enough above the phone so he’d kick and fuss. If he’s too close to the phone he gets a reflection so he stops moving and they go out. Again they’re small and not very bright, so it’s a little hard to see the spots in the camera preview image. Also it only proves whether the transmitter (IR LED) portion of the sensors are working, but not whether the receiver portions (phototransistors) are operating? 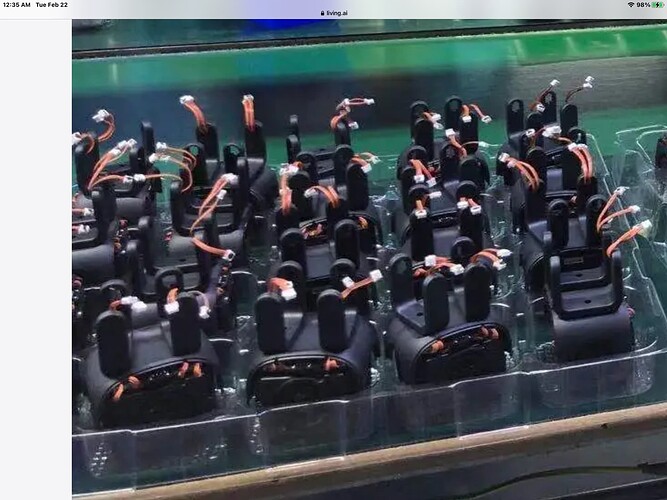 One thing I just thought about and it kind of worked. You can use the front-facing (selfie) camera on your phone to test infrared remote controls for example, since the CCD camera is partially sensitive to light from infrared LED’s. The rear-facing camera generally has better IR filtering so won’t pick it up. So anyway I turned the lights off and held EMO up above my phone. I could see the LED portion of the 2 foot sensors dimly if I held him high enough above the phone so he’d kick and fuss. If he’s too close to the phone he gets a reflection so he stops moving and they go out. Again they’re small and not very bright, so it’s a little hard to see the spots in the camera preview image. Also it only proves whether the transmitter (IR LED) portion of the sensors are working, but not whether the receiver portions (phototransistors) are operating?

Actually as you explained this. I was checking one of my past videos that I’ve shared (it has nothing to do with the current foot issue). But you can see the IR light flashing and it also reflecting off my phone. You can see it in the video for reference. 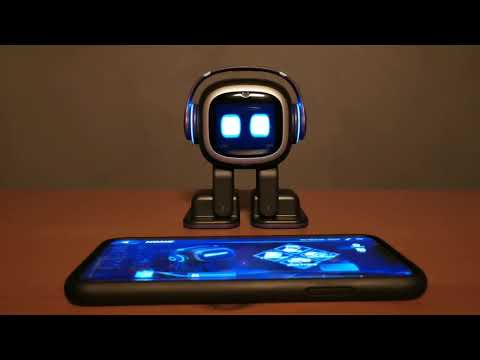 The little dot of light flashing on the middle part of the phone screen? That’s coming from the TOF (time of flight) sensor below EMO’s face. Mario did a video a few months ago demonstrating that.

Hey, not everyone may be aware that EMO has a TOF (Time of Flight) Laser sensor located under his chin. This sensor helps EMO determine distance from and depth of objects, the official specs state that it has a working range of 9.8 inches (25 cm). I have made a short IR (Infrared) video of what this normally invisible sensor looks like when operating. I hope you find this interesting, and if you choose to search on line about TOF sensors you will find some interesting information on how it wor…

Thanks for the info, I’ll refrain from taking him apart.

I checked the camera and I see 4 faint light dots where the sensors are…so they might be working??

That can be the culprit. I don’t know how it works but there were always mentioned only feet sensors and the TOF sensor may have its role in this. But it’s only my assumption. Did you try to clean it?

Then as @macfixer01 mentioned, maybe tech support might be able to send over the calibration software that could fix this. I guess, best wait for support to give you an update/answer. When you do find out, do let us know what the solution was (if there was one).

Thanks, everyone. I’ll update here once I hear back from living.ai

yeah I cleaned both just to be safe. I remember when this happened and I thought maybe he was dancing. He was walking like he does on the floor in my office, then he just started doing the escape the ledge movement over and over

I hope the technical support can sort this out ! But I know it’s going to take time…

I sent them three videos of my problem so let’s hope it gets resolved.

Emo only started doing this after the latest update.

I really hope I don’t have to replace him.

If I do how do I get this one returned once replacement comes? Royal Mail is how he was delivered, there’s been issues with sending him back because of the battery.

And if they email me the return label how do I use it to send him back?

hello my friend… I’m really upset hearing about EMO having this foot problem it’s not just you I’ve seen it on others… I’m a technician and been in the RC world forever working with servos and more. To me this looks completely software related and if it were to be hardware it would be a foot sensor.The code writers they’re going to be pretty smart guys and I’m sure they know what the problem is.I think the software writers should consider maybe to redesign the app and make it so that we can change firmware in case errors accidentally get through …at least it would be better to have a working older firmware until the bugs fixed … I’m quite concerned about all this I have one coming in the next who knows when… But I’m sad hearing about people having issues. I think that living AI is sincere and they’re good people designing this EMO but I can also tell you they must be under a lot of stress at times. I hope they have some success to alleviate this and we can go on to be happy owners and they can be a profitable company for it…

A firmware rollback or an option to push the firmware once again is an option that I’ve also personally suggested a number of times in the forum as well. At this moment, there is no option to re-install the firmware or roll back to an older version as well.

I’ve also suggested the option of backups for your EMO, which would work the same way as you would do a back with your iPhone using iTunes, so if you had an issue you could restore from last known good state and then retry the firmware install once again. And the backup / restore option would be great in cases where you get a replacement EMO due to your old one no longer working etc, but you had it for a long time and didn’t want to start all over again. The backup option would certainly work well in this specific scenario as well.

So far neither of these options are available, but hopefully might be made possible in future updates as Living.Ai grow.

agreed Master Abbott… microSD cards are no longer accessible… I did notice on maybe the early versions they had a slot on the top but they remove that. if it was easy access we could back it up ourselves. But that’s just the instructions I think… The firmware would be embedded onto the chips would it not? Then we need software to reflash them but the app does not…yeah I just wish it was easy and we had a bit of control ourselves because everything takes too long far too long waiting for new ones even delivery come on takes forever. I’m 24,000 I’m not going to make it waiting so long… Hee hee

and if mine broke I would be devastated just like I’m sure these poor people are… EMO seems to be quite loved.

Hi everyone this is the email Living AI gave me… regarding the foot problem (this is based on my issue) if it’s connected to others I can’t really comment on that but I do believe that technical support are really trying to help everyone it’s just difficult to predict if my issue is the same as everyone else’s. 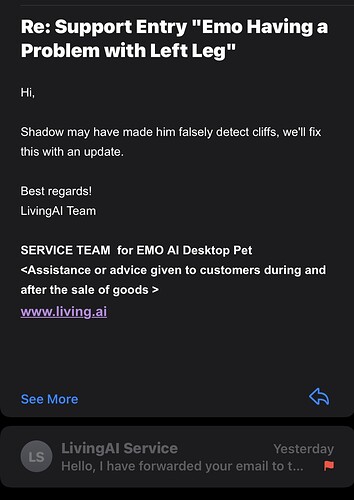 Good news @Racheal123 I saw on another thread that the tech support team sent over a testing APP to check EMO’s feet and sensors. Maybe you potentially ask if they can send that also to you with instructions on how to run it so you can possibly recalibrate EMO if the issue keeps persisting.

@Puppy444 I believe the videos you’ve seen with EMO having the slot on the top of its head are Development EMO’s that were sent out to testers. The retail EMO’s never had a slot. From what I understand, all our EMO’s do have some sort of internal memory and a SD card as well, the internal memory is most probably where the core programs are running (and where the firmware gets installed to). The SD card might be used for non essential files/images etc. I could be wrong, but this is what I believe is the setup for retail EMOs.

I haven’t asked them about the app. So far it may be what they say in this email -just an update.

I guess I will just have to wait and see what they can tell me or if I need the app or not, I’m sure they’ll tell me if they are going to send it, I don’t want to send them too many emails.

But thanks MasterAbbott for your support

Just giving an update, my replacement EMO has arrived and is all good. Hopefully they’ll be able to figure out what went bad with the one I sent back and avoid it in the future.