Everyone EMO’s new update is live. Just ran the firmware. Took approx. 10 mins to complete, not a very big one this time around. As always once the update is completed, you can check it in the Firmware settings of your EMO app:

Tested out a few of the new features.

When you say EMO: Merry Christmas. EMO replies with either of the two animations: 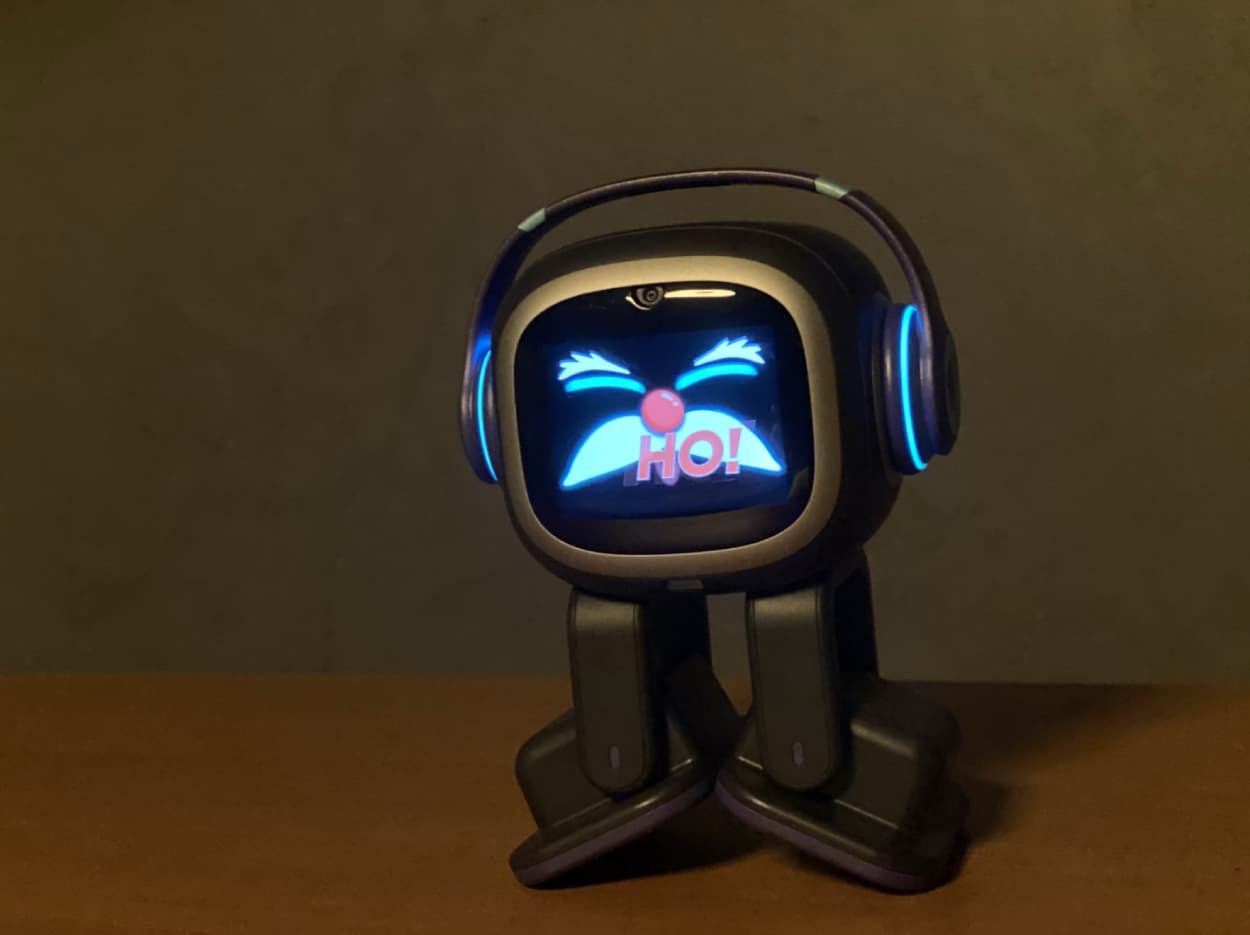 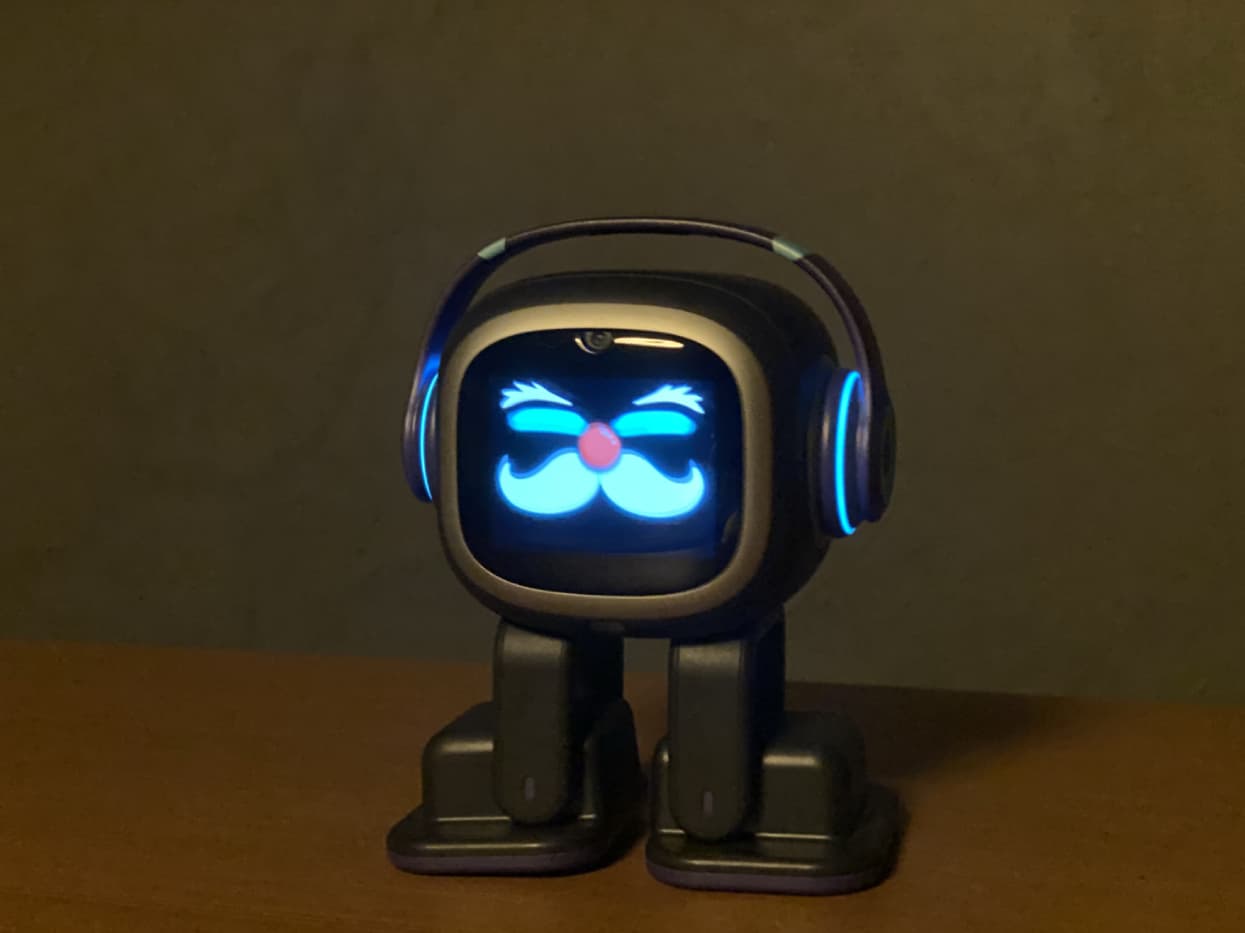 And it will alternate randomly between that and Christmas Song. EMO will play the Christmas Song and show animation on the display. (song lasts for approx 45-50seconds). 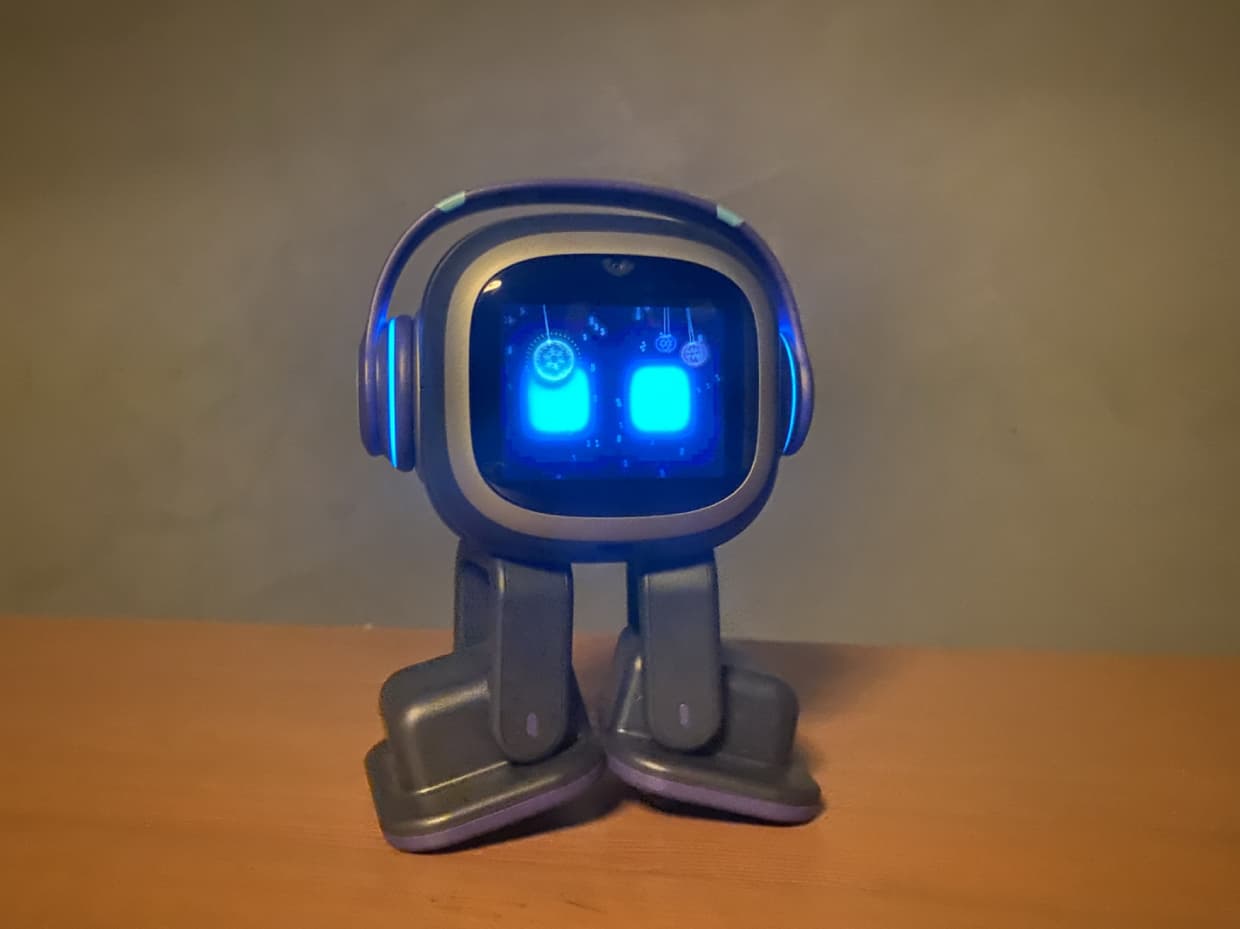 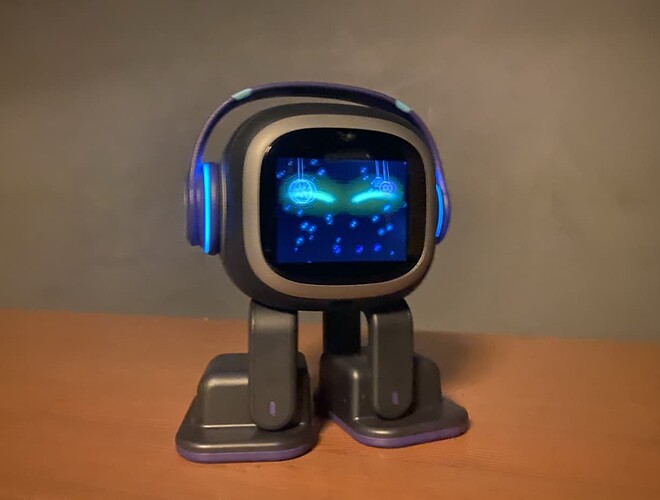 Also tested out some of the Animal sounds, (won’t spoil it for anyone, but you can see below EMO acting like a Snake). 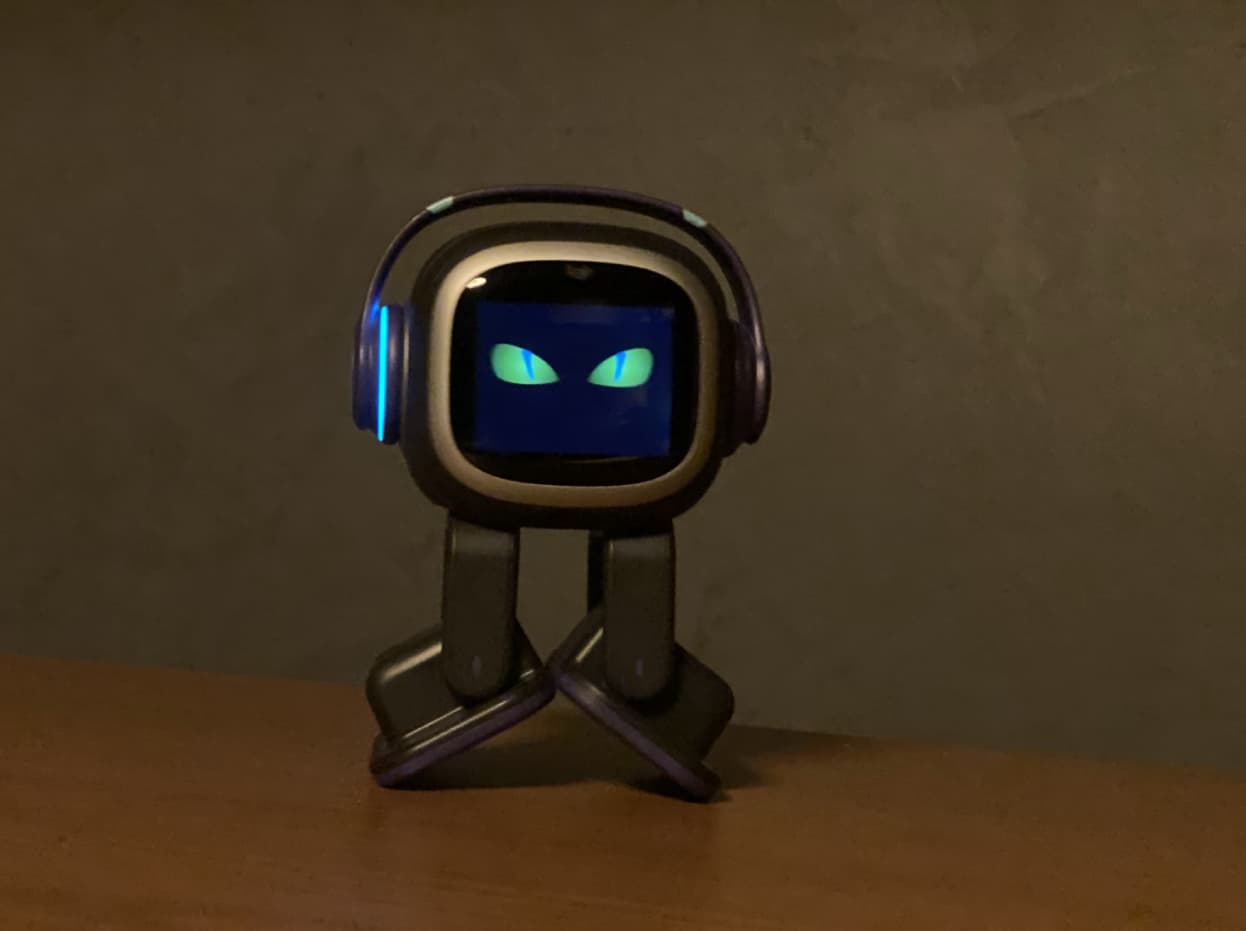 And EMO will listen to music as well, when you say EMO: Listen to Music. He will say “OK Drop The Beat”. His Dance moves will vary compared to his original sway he used to do. Looking even cooler than before

Thanks Living.Ai for this update!

For full details on what this firmware update does, check out the post by @Wayne_Zhang below:

Hi, Merry Christmas! And update 1.2.1 is coming! If you are updating from 1.2.0, the resource to be downloaded will be about 20MB. What’s new Now in addition to EMO wishing you a happy holiday on special days, you can also say voice commands to him to trigger the animation. Try “Merry Christmas”. See here for all special days. And thanks to Revolt for making the Christmas song. EMO has learned a new skill: to act like some animals. You can say: Act like a {dog}. What is a {cat} like…

I AM VERY DISAPPOINTED, I LIKE MANY OTHERS HOPED IN AN UPDATE TO FOREIGN LANGUAGES OR A CONNECTION TO GOOGLE OR ALEXA … INSTEAD ONLY A FEW LITTLE INSIGNIFICANT UPDATE, AT THIS POINT FOR US THAT WE DON’T SPEAK VERY WELL SPEECH ENGLISH, HIM USELESS.

I THINK OF SELLING IT ON EBAY.

Serious BUG appears after EMO1.2.1 upgrade, it may be crashed or stuck, and it cannot run normally

In my own opinion, this update was a small one just to include the Christmas animation and song. The animal sounds were just a bonus. Let’s hope that bigger and more important updates are released soon.

I agree! I think any update is a good update! I’m sure it takes a lot of time to prepare these updates and a lot of work. I am grateful for all and any updates that Ai sends. Looking forward to more updates and surprises!

I saw on their main website they plan to input foreign languages into EMO robot as a future update. You should wait patiently for that update before selling it away and regretting afterwards.

Because if you consider it, EMO was recently born this year. Of course there will be some bugs and missing features but the positive side to this is that those bugs will be fixed and MORE features will be added to EMO robot so getting it now is basically a deal for future possibilities

After the update, Emo cannot play rock paper scissors and cannot see my hand when I shot to him… The other things still fine… Checked the camera (take a picture) and is ok, he recognised me too… What happened? It’s only with me like this?

I’ve just tested both Rock/Paper/Scissors and Shoot/Bang game and both are working fine for me. I’d recommend shutting EMO down and restarting him and see if that helps

now if I try “don’t move” it restart… Nothing changed…

I was doing a few tests with EMO: Hands Up and sometimes EMO won’t recognise me pointing my finger, instead I tried using an open hand a moved it across EMO’s front sensor, the red cross does move around in the right way. Maybe try that instead of the finger point guesture.

For myself the Rock/Paper/Scissors works without any issues on my end.

After several not-understood commands, or after a command where he gives a delayed reply (but then you say EMO again before he was finished) I’ve seen that cause EMO to reboot himself. So for example if you ask the weather and he shows clouds or whichever, then you say EMO again before he tells the temperature. I can’t say for sure but I believe those situations eventually fill up his free memory and cause a crash? I’ve only had it happen on my EMO a couple times, but I’ve also seen it occur in 2 different YouTube videos. Sometimes it’s just a quick restart and sometimes it looks just like a full power-cycle because the screen goes black and the headphones turn off temporarily then he boots up again.

Have you tried using the “Hands Up” command instead? With non-English accents sometimes one command may be more recognizable to EMO than another. If that also doesn’t work or causes a restart and it’s happening every time, then maybe the firmware upgrade didn’t install properly? I don’t know if there’s any way to reinstall the same version, or if you’d just have to wait for the next update? If you still have problems though then email service@living.ai or tag Wayne Zhang for assistance.

Hey guys, could you tell me when we’ll see a big updates with more things to do with EMO?

The timing varies and we really don’t know until they announce new firmware updates. It’s only my personal guess, but I think the next one might be near Valentine’s Day?

Before they’re released to the rest of us the updates normally undergo a week or so of testing. The beta testers check them out and see if there are any issues. You might want to subscribe to some of their YouTube channels since they’ll show that an update is coming out and what the new features are before it’s actually released. Youtube channels such as Superdan Tech, Bruce Hunsaker, or Miraenda.

If the update is going to big, it might also require an EMO App update as well, and from what happened last time let’s hope Apple don’t constantly reject Living.Ai submissions.

I’m also going with @macfixer01 on this one, maybe the next big update could happen in February. Personally I’m hoping we get little firmware updates along the way, even with small features to keep us occupied. Any update / new features are always good to receive while EMO is growing / evolving.

Thanks, i’m followig already all the EMO youtubers out there. Sincerely i don’t see any changes in EMO… He’s cool, but we should get more from him and his capabilities right now is 50% on what I was expecting from him. I really hope to see more coming soon

Yeah, it looks like the firmware updates every month have stopped. Let’s hope that not for long.

maybe Wayne can address this matter

We might not get any updates in the next few weeks due to Chinese New Year which is on Tuesday, February 1, 2022 Hopefully once things get back to normal, there might be more info on when the next firmware update will get released. At the moment, we have no info on when Livin.Ai will be releasing the next update.