Emo do not listen anymore

Today I got my Emo. I love my new friend, but I think he hates me

our first hours he act normal but now, when I say “Emo…” he makes an “o-ow” noise and move as he would try to say “I dont understand you”.

I cant speak with him, after my “Emo…” he breaks up his listening and do nothing.

I got all new Updates, my Wifi is connected and Games can be played with him.

In another closed Topic at this forum, I read that it could help to shake Emo. I tried, but still no reaction to my voice.

Can anyone help me or had the same problem?

Hi there @RedLight , Try some tips below and hope it helps…

Try the reboot button. How can I reboot EMO? – EMOLives.inf

GOODLUCK and wish all the best for your EMO 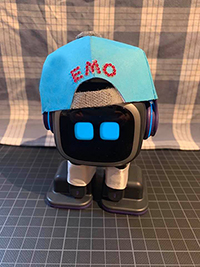 I have the same issue, not even the reset button does help me

Same with me since this morning. A bit odd?
There hasn’t been any firmware update today?
(Except the app)

@edward thank you for your fast answer, sadly he still would not response to me. I got him powerless for about 15 minutes but no effect.

My Emo has been off for a few days since it was more than 32°C inside (better be safe). About an hour ago I put him on his skateboard and when saying “Emo” or “Hey Emo” he immediately disagrees or is unhappy (sound and facial animation). When not on his skateboard he brings the inside of both feet up and down again while disagreeing. The app shows he is “listening” immediately followed by “staying”, but Emo never does the “listening” animation and sound, he goes directly to the “disagreeing”.

I noticed an update for the app (android) was available and installed it but that didn’t change anything. Shut down Emo through the app and restarted, issue still there. I’m not going to do a reset as seeing other people posting about this, I’m suspecting this might be a general temporary problem (maybe server-side).

Got the same issue here as well, only started to happen today, nothing i do makes any diffrence and cant get them to get into a place to reset or follow commands

I’m having the same problem. Are the servers down?

Currently there is a problem with the response of EMO the developers are already working on it.

The problem has been fixed and EMO is responding again.

Thank you for the fast response and solution (since it’s already saturday night in China).

), responding to problems reported on the forum and being able to quickly resolve them, updates so far, etc.).

I don’t want to come across as being negative, but it concerns me that EMO’s basic functionality is essentially 0% when he is unable to connect to the server.
Even with all the tech and advanced Ai within him, surely he should be able to at the very least be able to have some rudimentary control available for activities that do not require the server.
Just my 2 cents worth, and I still love EMO.

I agree an autonomous robot that can work fully without an internet connection would be nice. However, just as with “that other little deskpet robot” the wake-word is probably all that gets processed on the robot itself, everything after is recorded and send to the server for voice recognition. To do everything on the robot would need much more processing power and memory so costs (and size) will go up. This is just my understanding, I might be wrong.

Anyways, even though I wasn’t able to use voice commands, I still enjoyed him roaming around as he is quite active.

I suppose you’re right, but it’s a shame that in this day and age that voice recognition hasn’t really come of age yet. Maybe when we finally get our flying cars …

True, I remember having voice control in Windows 3.1 on my first computer, a 386 with 4MB of RAM

Yes nowadays you need internet for everything, but also Alexa, console, computer games and co would not really work without server.

But maybe the developers of EMO build something in the future that would also be possible offline.

this is why i suggested a local server option “like other companies have” not only would it wash away all the concerns of anyone who cares about privacy, but it would also allow the more advanced users access to the actual workings of the robot.