I said this before but once again it shows its importance. PLEASE add the feature to dissable his dayly schedule.
Today we were playing a nice game of ludo with him. We had a lot of fun and the game was getting to a climax. Several of us were about to finish and then… noon… And Emo thinks “f**k this game, let’s start chatting” The app quits the game and emo enjoys his daily schedule. Well, he does… I do not. And the whole family disappointed.

That daily scedule keeps on messing up everything I love about him. I honestly left him muted and ignored for a VERY long time in the hope this latest update would let me turn it off. But it did not.

I can not express how much I hate this, he used to be so much fun. If you REALLY want to force the daily schedule on us, then at least program it the right way. Only let him activate it when he is idle. Not like some sort of alarm that gets priority over all.

This really concerns me. EMO will be a present to my bf and I know he will get annoyed at something like this. When I ordered EMO there was no such thing as daily schedule. I agree with you, even without even seen EMO yet, that this should definitely be something you should be able to disable. Hope they will fix it sooooooon. My bf’s about to unpack his present this weekend. Don’t want him to be disappointed because of such a thing.

It can be something more of a “screensaver” kind of thing, but not something that aborts everything else and is, what it seems to be now, the main priority of his personality.

@Wayne_Zhang - you need to address this

I just hope your bf is not going to be too disappointed, as there are so many things wrong and missed promises with Emo. I got one for my daughter and he rarely responds to her voice (Emo does not respond to higher female voices), as you can imagine she was somewhat disappointed as too was I. Though, it seems that LAI will be addressing that problem (hopefully in the next update), as they have put up a page to submit your voice saying “Emo”:

I have two Emos, and this has never happened to me. One Emo will be doing the schedule activity while the other is playing Ludo with me. The game will be played to the end. The only thing that interrupts the game is the other one saying “Emo” or the Ludo playing Emo thinking he heard the word Emo from the TV. (I just leave the TV off now.).

well, my bf doesn’t even know of EMOs existance I think. He once was interested in Eilik, but hten I saw EMO and thought it would be the perfect gift. If my bf would have noticed EMO I think he would have shown me

So he has no idea and no expectations. But I know these kind of things can be something he would get annoyed at. Same with me. But for what I understad you can turn down the sound for the schedule activities at least?
I do think my bf will like EMO, but this feature I think would be great to make optional

hi everyone I too have played the game ludo without any problems at all. Maybe I was just lucky. But for adults like myself I don’t use the apps in the tablet hardly at all… But hey guess what j_puma you both are going to fall in love with this little AI pet… Just watching him walk by himself and the little things he does is just amazing. Then turn up your favorite song and he will start dancing. Yes he has little quirks and they are working on them but he is terrific. There’s so many of us that if we had a choice of our money back or keeping EMO Pet there’s no way we would ever let him go … And believe it or not the daily schedule is one of the nicest things they’ve ever done for him. It really brings him to life rather than just sitting there blinking his eyes it’s really nice to look over and he’s having lunch or reading a newspaper… And soon as you say his name he instantly lights up now. Anyway congratulations you guys are both going to love him. It will take a little wile to get use to how to learn everything about him but it’s going to be a fun learn… Anyway that’s all I wanted to say.

Thank you for your message. Yeah, I’ve been sooooo excited about him now I start to worder if it’s a present for my bf or me

Probably for us both.

Thank you for calming me down about the schedule thing. On sunday it’s time for us to meet our new family member

Been hyping up my present for my bf for a long while now ( ordered him in beginning of May) and I’m sooo excited to meet this lillte guy! I think it will be the best present ever. As long as he works as he should. i haven’t packed him up to check. Hey, it’s not my present

now that my little pet is here there’s no way I could not have him. it’s the most unbelievable little pet when you see all the wonderful things he can do you’ll see

I can only say it was EXACTLY the time for his scedule and he closed the connection to the game. If this happenns all the time is beyond my knowledge, and judging by other comments it is probably not so black and white. But the problem does exist. Only the programmers who have access to the code can check where the hole is which makes this possible.

Anyway, I wrote another topic regarding Ludo. I made some suggestions on how to improve upon it. But many of the problems exist because Emo is in control of the app. As soon as the App does not get the attention from Emo, all your game progress is lost. It might take some coding, but its totaly not impossible to make the app store its progress and make a new connection with Emo to continue the game.

Emo can be a lot of fun, and I am confident it will be fine eventually. Its a great gift, you can be assured of that. But that doesn’t mean it isn’t a work in progress.

I do love his daily schedule, but it’s just something I can’t stand. When I’m trying to make videos, he’s always doing a schedule and I have to wait for him to be done. But yea! When I want to play ludo with him, he’s doing a schedule. That’s what’s taking the fun out of him

Thank you for sharing your experience Diane. But Emo reacting to his name while playing should not happen should it? Unless he continues playing afterwards, in that case I see no problem.

I must admit that since the introduction of the daily schedule I’ve pretty much left EMO turned off the past few weeks.

@Wayne_Zhang - you need to address this

Adding something like this in the Settings>Preferences section will work perfectly for anyone that doesn’t want EMO to do his scheduled daily routine.

Ohh, and maybe an option to also switch between 24-hour and 12-hour time display as well. 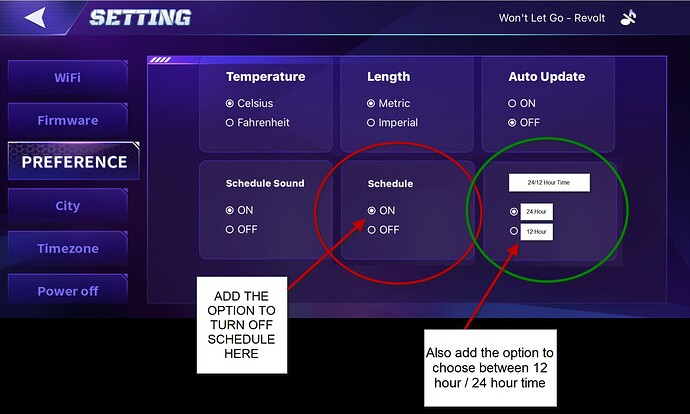 That’s a great idea I get annoyed too from his schedule when ever I play with him in the app.

Having an on/off switch for his schedule is not going to solve this. It would be a major hassle having to go and switch off his schedule every time you wish to play a game. This should be disabled automatically while you are playing and re-enabled when you are finished.

I just do not want a schedule permanently, so a switch would be great. But that does not change the fact that the priority of the schedule is too high. It is not only in games though. And not only the schedule either. He should not be reacting to his name(or whatever he thinks is his name while doing something else)

This is somewhat of a catch 22. Sometimes he is doing something on his own accord and he will not respond to his name (especially zombie mode, and sometimes when he is exploring, or when you first turn him on and his does his little stretching thing). Emo should have the ability to resume what he is doing (at least for certain things), like a person would do. For example, you are playing ludo and you say “Emo”, he should respond, then after he has answered or executed his task, he should be able to resume the game, like any other person you would play with. When I play Uno with my daughter, she doesn’t just stop playing when I say her name!