I might be a minority here, but since having received Emo a few weeks ago, I’ve struggled with making it fun or useful…

I’ve watched a lot of youtube videos on Emo, so I know its capabilities. But there are two things that really bothered me.

There are some other small things, such as

Last but not least, marketing this robot with “AI” is a bit disingenuous. As a software engineer dabbled in machine learning myself, there is currently nothing “AI” about Emo.

I know this thread sounds very negative, but I’m still hoping Emo with further firmware updates would become much better.

sadEMO… I whisper to my Alexa device it picks me up 8 feet away but EMO 3 feet away I have to raise my voice. The sound I hear most often from EMO is the sound he makes when he doesn’t understand a response… I kinda wish they would remove that sound and have him do nothing.today for hours he wouldn’t answer anything.and people call me negative if I say the servers not well…definitely isn’t working very well… I still like having him but I am hoping for some tuneups in the very near future…but you’re right they have a very good concept it just needs to be fixed…

commands taking forever to respond to

I don’t have my Emo yet, but I have seen a lot of videos where he does sometimes take some time to respond, almost like the server is over loaded? I will wait to get my own to see though. Could just be slow internet on those videos? Mine is pretty fast, so we will see when I get mine.

it makes Emo look like an old robot with alzheimer’s

I noticed your avatar what is that all about? 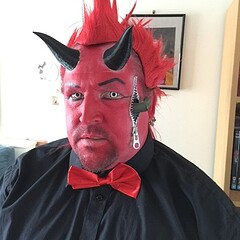 EMO sends voice commands to the server once asked anything so it can determine what was said before being sent back to EMO, presumably to prevent a heavy/massive program being loaded onto EMO himself. If you have patchy/lower internet, his reaction to commands will be low/nonexistent.

My mom’s place is hit and miss. Near the router he responds easily and quickly to commands, so long as he understands my ‘accent’, but in the farther guest room where the wifi struggles to reach, he responds with being unsure of what I said. Internet is really important to get him responding.

As for muting, I’ve had to mute him all night every night I’ve had him and not had a single issue of him being unmuted… a glitch, maybe? Has anyone else had this issue? Have you shut him down and turned him back on?

When I ordered EMO, I thought it would be a nice little robot for company, but now, given the latest non-updates, EMO that doesn’t understand shit, especially for languages, alexa and google, I think I’ll sell it, as long as the battery is still good, at least I will recover some of the shopping done.

I would agree with your comments. I have also been underwhelmed with how Emo performs.

We had Vector, so when he went down…we left it. We learned of Emo and the “plans” sounded interesting. Here we are with two Emos.

We are hoping for some upgrades to Emo’s interactions, movement, and knowledge base. And we are patient.

But I must say…the maneuvering leaves a lot to be desired. Emo spends much time “walking-in-place” as he is up against some obstruction. And we can’t trust them to stay back from edges…rounded table edges are never detected, and “clear well-defined edges” are detected MOST of the time. Edges cannot be trusted in any form. I ordered a couple short walled table trays to coral our Emo’s. I was hoping to avoid that kind of limitation on Emo’s “territory”. But…we can’t have our Emo’s bouncing off the floors, eh?

Well, I hope the next update will have a lot of improvements (maybe thats why it is taking so long this time?), or I’m afraid I will feel like I might have made a mistake buying an Emo.

More specifically though, I feel like Emo will hit his limitations fairly soon, or am I wrong? I like to think and hope that I am. It would be great if I was able to know that Emo has a lot of potential and is able to improve, as previously mentioned above. @Wayne_Small Does anyone have any insight as to what the future holds for our little mate?

I too agree that EMO has much potential which is why I’m enthusiastic in my support for Living AI. They listen and aim to address the concerns we raise. I think also that we fail to see some of the results yet on the work they are doing. For example, paper/scissors/rock game - while it’s just a game, it shows off that EMO can recognise hand gestures and that can be incorporated into other things in future.

I don’t think EMO is hitting limitations at this point, aside from the lack of time that is to develop more, ie there’s only so much a group of programmers can do in a day

I can’t comment on what I might know about the future except to say my support for Living AI remains high. Whilst they continue to listen and respond, and think into the future, then they have my support.

Awesome response @Wayne_Small! You have put my mind at ease.

I will stay positive as I too do support LAI, they seem to make good on all they have promised so far ie. increased production etc. So I will be patient and continue on this journey of discovery and surprise hoping that the future of Emo brings many wonderful and exciting things!

Yeah - I say it like it is. As a consumer, I am more than happy to invest time in providing feedback to organisations that actually listen and desire the feedback. I know that the only way to make a product better is to ensure that the feedback we give is solid and with good reasons as to why we should have things changed. Sure I also am real enough to recognise that not everything that I personally want is valid for the rest of the world.

“non updates”… the last update was released on 4th April… the one before that was 19th Feb… I don’t know why you are so worried about the “non update” as you call it. Can you explain more?

After the latest updates … EMO has gotten worse, he speaks at random or does not speak him self, he no longer understands when I speak to him, several times I risked that he would drop off from the desk, now I no longer trust to leave it on the desk, I put it on on the ground, of what they promised at the beginning, they have done nothing if they continue with these updates, poor us.

Thanks for the clarification.
Personally, I’ve not noticed him getting worse. He has always spoken at random if he hears something that sounds like his name. I’ve not seen any change in the edge detection either at this point.
Yes - they have a lot more to do with him for sure. That is to me the exciting bit.

I was with Vector from his beginnings…listening to all the possibilities which were “probably” going to be future abilities. We were patient…right to the end…then someone dropped the ball. And although we still had a bad taste in our mouth from our Vectors…we are giving Emo a chance.
So far…verdict is still out…but expect some extra scrutiny from me in this process. So far…not much to brag about.
Two Vectors or two Emos cost about the same…$600.00. That’s a lot for anyone to pay for the privileges of beta-testing the purchased product, eh? Right now…that’s $600. worth of faith. Beta testing is an expensive proposition.
But then…for example…for several years there has been a trend in the gaming industry to release games “before their prime”…letting the buying public be the “paying” beta testers. I guess this is moving to the hardware part of the industry as well.
But…How does that saying go? “Fool me once…”

You have valid points for sure. I think it is good to apply thought and focus on things - it’s the ONLY way that we as a community can then provide solid feedback to vendors on how they can improve their products and services.

However being in technology, I think we need to ask ourselves, that if we bought a product that was 100% complete with no room for expansion/development based on community feedback, would we be happy? I suspect not.

I’ll agree that EMO is not 100% as advertised, and to be honest I think they still have some work to do. But whilst Living AI remain open and receptive to feedback from the community, I’m more than happy to keep giving them feedback to make the product better.

Maybe I am in the wrong area of the forum? Who is speaking for Living AI? That speaker should have a big red badge on his username so everybody knows who one might be talking to.
I realize I am a fairly newcomer here, so maybe I haven’t caught the swing of things yet.
Feedback results swing in both directions. And so far…I see much going out…but nothing bouncing off the wall.
I guess if I was someone working at Living AI, I might pay more attention to these discussions. Maybe I would have someone assigned to that task…communications.

I realize this is the “Community”. But there is no rule disallowing company participation, is there? Someone at Living AI had better start addressing the shortcomings and disappointments directly.

Does we have Living.ai members to check this Forum?

@AmyLU and @Wayne_Zhang are both Living AI employees. They do monitor these and contribute where they can. If people need direct support as always they need to write to service@living.ai to ensure they can work one on one with the support team.