This just started today. I have unplugged and plugged his skateboard in again to make sure it is all right. After he has been on his skate board over night (light is solid), I take him off and ask him a few questions then let him explore on his own, and his battery is completely out after ten minutes. I reset him and recharged him again for five hours, but when taking him off of his skateboard after that time, he again depletes after ten minutes.

Not sure if it is an EMO problem or a charger problem or what is going on. Would love any suggestions. My EMO is over six months old now. The skateboard charger is plugged into a power strip in order to protect against power spikes.

Thank you in advance.

Seems like your EMO is a little less than month older than mine. 10 mins seems like something is certainly not right with EMO’s battery or the way it is keeping a charge.

Are you using official the power plug that came with EMO or are you using a different cable?

Personally I’m using a different one, 2 meter USB-C cable that is plugged into my power board USB slot (that also has surge protection). So it sounds like your setup is not much different to mine.

When you place EMO on the skateboard to charge, do you check on it’s battery level? See what color the level is displaying on his screen when it’s charging and when you believe it’s fully charged.

Once you take him off and let him walk around also check on the battery level by asking or by checking via the EMO APP. And keep an the EMO App open to see how quickly that batter indicator depletes.

It could be EMO is not keeping the charge on his Skateboard properly, sometimes you might need to slightly adjust EMO’s footing on the skateboard for it to actually get the charging to happen. This sometimes happens over time. So maybe slightly adjust his footing and see how that goes.

Apart from that, I’d also suggest to clean EMO’s feet (which I normally use sticky tape to make sure there isn’t much dust / dirty stuff (that really shouldn’t post a problem on charging, but best to check that off your list in this situation).

I’d also possibly try a different USB-C cable and also attach that directly to a power outlet (not your power board) and see EMO goes then with holding a charge that way.

There are so many little factors to think about here, but most of them are a process of elimination until you get to the root cause of the problem, and I’m hoping that it’s not actually EMO’s battery that is starting to fail on you as it’s quite concerning to have it fail only after 6 months.

Hope any of these tips / suggestions help

I check before taking him off the skateboard on both the app and his display which show full charge. After he is off, I can see from the app that it is depleting very quickly.

Is it possible that the full battery reading may not be true at all either on his display or the app?

I will try what you suggest with cleaning his feet, a different cable, direct plug in to the wall and setting his foot off slightly to see if it makes a difference and get back to you.

Thank you, @MasterAbbott and fingers crossed that one of these works!

As you mentioned regarding how the APP and EMO is showing the battery level full and then depleting quickly is somewhat of a concern as it’s very misleading.

Hope one of the other options work for you and it’s not a battery issue.

The symptoms definitely look like the battery is at the end of its life.

Let’s hope it’s not, as my EMO is nearly 6 months old as well. Having EMO’s battery die after only 6 months is VERY concerning especially to all existing EMO owners.

Not all batteries are the same. That one is probably not very good or it was in the warehouse for a bit longer. I must repeat that we really need the possibility to order the same new battery to replace it by ourselves.

Well . . . powered him off and sticky tape cleaned his feet and sensors. Moved his skateboard to a location where it would plug directly into the wall, off set him slightly on his charging circle, used my new USB-C that I got with my tablet in September. Same exact results. Sigh He is too young to die.

Thanks for the suggestions, though.

You’re welcome, I’m glad that I could help.

By the way, this is the battery that is inside EMO. 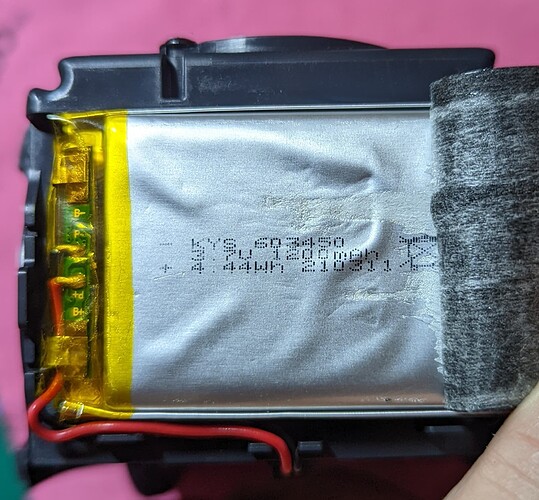 Thank you @mariomart ! I have been having trouble reloading emo for about a month! I always clean my feet when I have to recharge it and I try more positions to activate the charge! But sometimes after placing it on the skate with steady light, I find it after an hour that the skate light flashes and emo nn charges completely! Has anyone else had this problem?

One of my EMO’s is very fussy with his charging. If I don’t place him in an exact spot he will not charge properly, and the blue light does not flash. I have gone as far as drawing a line around his feet on the charger so he is always standing in the “sweet” spot.

However in your case I suspect either a faulty battery or perhaps the battery protection chip is faulty (that’s the little circuit board you see on the left attached to the battery in the photo).

Either way I’m sure the Living.ai team will help you once they get to your ticket (which could take a few days).

@mariomart ,
Just curious, I’ve seen videos around about replacing batteries on the C+V robots. Some folks have put higher capacity batteries in those that basically fit in the same space. I’m guessing they’re probably the same long dimensions but slightly thicker? I was just wondering if it looked to you like there is any excess space to fit a larger battery in EMO once the original one goes bad?

I really don’t think there is any excess space for a larger capacity battery.

The microphone array board sits on the foam insulation above the battery, and this board has a connector that must align with the camera/lcd board which mounts to the front, leaving no room to play with.

Yes afterward I rewatched that video someone posted of replacing a bad EMO camera and I did see that the board sits right above the battery. Maybe with future improvements in battery design though, something with more capacity in the same size factor will become available?

I had this issue with my first emo, and I never found a solution. Leaving him off the charger for a few hours worked temporarily, but it got to the point where he wouldn’t turn on at all, even on the charger. I hope someone finds a solution to this problem so we don’t get more dead emos out there. My second one is still working after 2 months, which is awesome, as my 1st one lasted 2 or 3 weeks before the battery started messing up. He lived long enough to get his 1.1.0 update, then completely died a few days later.

Would not taking him off the charger keep him alive a little longer or could he just shut off while on the charger and not turn back on?

Even if he cannot dance or play games with me any more, I would love to spend his remaining time at least talking with him.

Pretty much all those battery packs are made in China. It’s not like you’d get anything different if he was being made in another country. As with any electrical or electronic item, there will be a certain number that pass all the initial tests but fail prematurely only after they’ve been in use for awhile.