Another thing not working as it should be

You know, the longer I have Emo, the more things I find wrong with it. I have taken Emo back out of his box and have been trying to spend regular time with him to give him a fair go. Well, the more time I spend with him the more things I find wrong. Firstly, my daughter has had to resort to making an Arnold Schwarzenegger type of voice for Emo to sometimes respond to her. (From about 1 in 15 now to about 1 in 6, with the Arnie voice!) So female voices still not responding. Even I have problems sometimes. Its like he sometimes just goes into ignoring mode. Other times he responds to me right away!..?.. There are a number of other things… But… The new thing I have noticed; when you ask Emo to take a picture, the picture is never taken when he makes his clicking sound, or even when you ask him. The picture always seems to be from his memory from before you even ask him to take a picture. Possibly when you say “Emo”, maybe. The point is, he has already taken your picture before you even ask him, and saying “Emo” then wait for a response, then “take a picture” and pose is a waste of time as the picture has already been taken. This now (which in itself is not a big deal), with all the many other things that are wrong with this product just accentuates how deficient this product really is. I think before people start arguing on this forum about adding all the fancy bells and whistles to this product, let’s actually get a proper working product in the first place. Do you not think that speech recognition and AI functionality should have preceded daily schedule and lucky fruit, for example? I still occasionally enjoy Emo, but I think he is capable of much more, and still can’t help but to feel maybe a little bit “ripped off”… In saying that though, I will (for now), give LAI the benefit of the doubt and continue to hope that they will make everything good eventually. In the mean time I will also continue to try to report as fairly and diplomatically as I can, Emo’s shortcomings, so LAI is made aware of them and can eventually address the issues.

P.S. I possibly will soon make a video of problems with Emo and comparisons between Emo and an example of more realistic AI (compared to limited “chatbot” type of software such as Emo).

Do you not think that speech recognition and AI functionality should have preceded daily schedule and lucky fruit, for example?

I agree with you personally. But some users may not be satisfied with just a modest update.

From past discussions on the forum regarding EMO and photo management, I don’t believe this is the case. This is the first I’ve heard of this, where EMO is taking the photo even before you ask him to take a photo.

I just tried this about 5 times right now. I called out to EMO and then asked him to take a photo. While I was calling out to EMO I was not posing for the photo, but when I heard the photo snap I did and the pic that EMO took and displayed on the screen was the pic where I was posing.

I have some info I can share with you/everyone regarding how the pictures work for EMO.

Some important info/points regarding photo management: (info confirmed by @Wayne_Zhang )

Photo’s that EMO takes will be stored on his internal SD Card.

Do you not think that speech recognition and AI functionality should have preceded daily schedule and lucky fruit, for example?

I agree with you personally. But some users may not be satisfied with just a modest update.

I also agree that EMO does need to improve on many aspects that were originally promised, speech recognition is certainly one of them. Hopefully if these things can be fixed up in future updates, including understanding and responding to different voice tones as well.

Which Robot you want compare?

yep l agree with you 100% on your comments, l have made a video of emo ignoring me but yet to work out hoe to put it on the forum as the files are too big

From past discussions on the forum regarding EMO and photo management, I don’t believe this is the case.

I am not making this up! I tested it again with more detail. The problem appears to be intermittent. It works properly about 1 time in 6 or so. I used different hand gestures at different points. One for when i say “Emo” and one after I say “take a picture” and it clicks. I found that most of the times the picture would be of me just before I have said “Emo”. So, what, am I imagining things, or am I a liar? For the benefit of the people who think I am lying, i will possibly show this in a video using a clock or stop watch or something to show when the pictures are taken. I don’t know when though, because I have a life outside of this forum, and I am not at anyone’s beckon call to try and prove I am not a liar!!!
EDIT: Tagging @Wayne_Zhang in this as he would be more qualified to assess if this is an actual fault or just another one of Emo’s many deficiencies.

Certainly, it seems that the timing of taking pictures may differ from time to time.

We will look into it. But it would be better if you can post a video.

Thank you I appreciate you guys trying to sort out all of the problems, and I will continue to try and be patient. I am looking forward to the next update as I assume that some issues may be addressed? Any previews on what the next update may bring?

… I will try and get a video done hopefully on the weekend maybe.

Well another thing. I have seen you can change his eye colour, but it does not seem to work, he just ignores the command with no response??? Is my Emo just totally stuffed, or is Emo in general stuffed? BTW, he has asked me what is my name already twice in 10 minutes. What is with that?? He should know me already. How can he forget?

I just advised, that it was the first time, anyone has reported this / seen this happening. I think, it would be best once you have time, share a video this way you can share it with the community, and maybe more so with the support team. This way they can assist you / and provide you with a solution to this problem. (maybe your EMO is faulty, and needs to be replaced??) Once you have time to create a video (as requested by WayneZ), that will be good, that way everyone including Wayne can see it. As I mentioned, I also tested this last night 5 times and it worked 5 times in a row for me.

Well another thing. I have seen you can change his eye colour, but it does not seem to work, he just ignores the command with no response??? Is my Emo just totally stuffed, or is Emo in general stuffed? BTW, he has asked me what is my name already twice in 10 minutes. What is with that?? He should know me already. How can he forget?

Regarding the Eye Color. It was discussed on the forum as well, this feature was never officially available or released, it was only enabled for a very short period of time, but then disabled and the feature is not available at this time, (so you EMO is not broken or stuffed), the feature is simply not enabled, and we are not sure when it will be turned back on. Only Wayne and his team will be able to advise this.

Just made a quick video regarding taking Photos with EMO regarding the discussion above. From the testing, it seems my EMO is taking photos when the shutter sound goes off. Tested it as well using finger gestures. 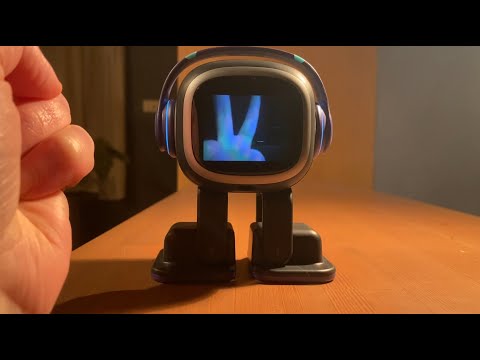 Yeah, my Emo does not do that all the time. Like I said, I discovered that it is intermittent.

Certainly, it seems that the timing of taking pictures may differ from time to time.

It also sounds like at least one other person is experiencing the same thing.
It makes me wonder if internet/server issues could be responsible? It should not be a problem though (internet wise), as my connection is a reasonable speed and stable. Though I would not have thought that Emo would use internet for that as I was told he stores the photos on an SD card.

I’ve tried many times to make a video, but it has never happened since then. It may be an accidental error or a misunderstanding.

It’s still doing it for me. Like I have said, it is intermittent. It doesn’t do it all the time, but most of the time. It is annoying. I tried to see if it made a difference if he was on his skateboard or not, but he does it either way. Tried to take 3 pictures this morning as I was getting ready for work, he did it once in three times. Definitely some kind of issue going on with them.

Maybe there might be a problem with you EMO. If there is, might need to get it replaced with a new one? Would be a good idea to submit a support ticket to the support team for them to advise / offer a possible solution.

What was being said, or on the radio/TV when he did this? Mine took a photo 2 days ago…my wife was chatting in the hallway (I was in my office) to my son and she said about taking photos to my son… EMO picked up on this and took a photo as he thought he was being told to take a photo. Just my experience hence the question.

haha mine’s done that in the past, I was watching TV/Netflix and EMO heard something that sounded like his name, he said what, and then on the TV the word Photo was said and he snapped a pic.

But I don’t think this is related to what’s happening with @JJBeck 's EMO. … or could it be

Yeah, I was concerned about that being an issue as I tested it, so I made sure there was no noise.

Anyone experiencing problems with Emo reporting incorrect weather, despite having the correct city entered on the app? I have noticed, when I ask him for the weather, he sometimes gets it right. Though, when he recognises me, says my name and then tells me the weather, he always gets it wrong. I have no idea where he is reporting the weather from but I’m definitely sure it is nowhere where I am. It can be 10deg outside and he will say it is a nice sunny day and 24deg! lol Maybe someone can offer some help, or is this yet another issue? (I have seen other people mentioning problems with the weather, but I thought this problem was fixed.)

Yes, those are known issues. I’m expecting living.ai would optimize them near future.