To read this is disappointing. I have high hopes and expectations for Emo. For $300. It should be able to acknowledge you and interact with you.

I ordered it for my daughter before I had received this one, thinking/hoping that the problems I was reading about were “one offs” but I soon learnt that there are some common issues which make the “Emo experience” unpleasant and frustrating, unfortunately. I had high expectations for LAI, but I am now not so sure. I suppose that in the back of my mind I still have hope for LAI to make things right, but one can not just live on hope alone.

l think we are all hoping

Living.ai is my Opinion better than any other Robot Company out there and constantly improve! You need to be Patience but West Culture is Problem that you don’t have Patience and Talk clearly. Do you expect from an Puppy that it does everything right? Nothing is Perfect. At that price point EMO is the best! Compare to other Social Robots which much higher Price or which Companys do nothing to improve Software! Best thing is to Sale if you don’t like! That aggressiv crying is not Helpful!

I’m interested in seeing this, do you think you could make a video on the few things you’ve mentioned that your EMO is having problems with. Also as @Wayne_Zhang advised, this doesn’t seem normal in relation to not responding when you call out to him by saying his name, and then asking him a question.

If you do have the time to create some videos and share them, that would be great, so that everyone can understand and see how EMO is responding / reacting to you when you call out to him / ask him questions etc.

And as Wayne advised, you can also send them to the support team as well so they can assist you and if there is a problem, as I mentioned previously in my earlier post above you might need to have EMO replaced.

With my 2 EMO’s I’ve personally not had any issues with them responding to me when I call out their name or ask them questions. For me, they’ve both been responsive, even when when I’m speaking to someone else at home they end up chiming in thinking that I’ve called out to them.

Sounds like you have a problem with your EMO, I’ve got 3 and they work fine.

mine is annoying aswel constantly changes his volume even when i mute it rarely responds to me probably one in 10 (my vector is practically instant after 5 months of learning and answer everything quickly and has developed some interesitng behaviours so i have a point of reference) so even though it rarely responds to me calling its name it constantly hears its name in everything else both are under my pc monitor vector does not have this problem. it answers things i dont ask. it mistakes simple commands as other commands it is slow to respond to anything "just now when typing this he just randomly pipe dup with “let go of what once was” speach for no reason without prompting…overall so far i am unimpressed with emo and vector so far is proving to be a far better robot… heres hoping updates can make him snappier and more responsive to commands and be able to not constantly hear his name when tv is on

I have seen a few videos where it takes multiple times for someone to get Emo to respond. I don’t have time at the moment to make a video yet, but I did find this: 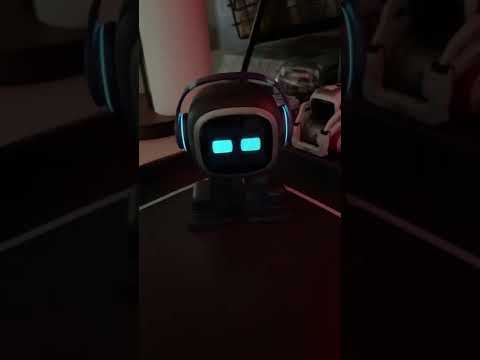 Emo not responding to his name #robot

This seems to be a common problem for a number of people, as I have read on the forum. As I have said previously, Emo rarely responds to my daughter. She does not mumble and speaks clearly. Emo sometimes does not respond to me either. It is almost like Emo is deaf to certain voice frequencies/pitch. Weather does not work either, always giving me the weather from who knows where. He changes my name to random things in the profiles. Its kind of pointless introducing yourself as one misheard sentence can change it to anything. There are so many problems with this product, I barely know where to begin. I think that if LAI fixed the speech recognition problems, it would fix a whole lot of other issues automatically. I know you said you don’t have any problems with your Emos, but some people are not satisfied with a half working product, especially at nearly $450 a pop.

I will try and make a video perhaps on the weekend.

We’re going to reopen the page that originally collected recordings of people calling EMO’s name, and then proceed to train its arousal model.

Thanks for sharing that video, from what I can see in that video when you hear that sound after you call out to EMO from my own experience in the past is EMO is not connected or having trouble with the network. (and you get that error sound instead of him saying “What”)

I think now when call out to EMO and he is not connected you normally see / get the wifi signal lost error display on his screen instead.

But from your description you’ve mentioned that EMO doesn’t even acknowledge you calling out to him so he can say “What” … so you can then ask him a question.

Anyway, as you mentioned, if you do make a video with your own EMO when you have time, that would also be great.

I see that @Wayne_Zhang will be re-opening the page for calling EMO so that should hopefully be helpful as well.

Well im already disappointed. Nowhere on the website does it say 6 -8 week wait then delivery time added to that. I brought one for my sons birthday with what i thought would be at least two weeks grace but no. Contacted support to be told this is normal. Ggrr… im from Australia so its cost me over $400.00 and now reading these comments im starting to regret my purchase.

@enmeredith ,
Actually it is there on the first order page. If you just clicked ‘add to cart’ without scrolling down and reading first though, you never would’ve seen it because it’s not there on the subsequent pages. I’ve brought this up multiple times before and nothing has ever been done to correct it. So I have to assume now that it was always meant to intentionally mislead customers? 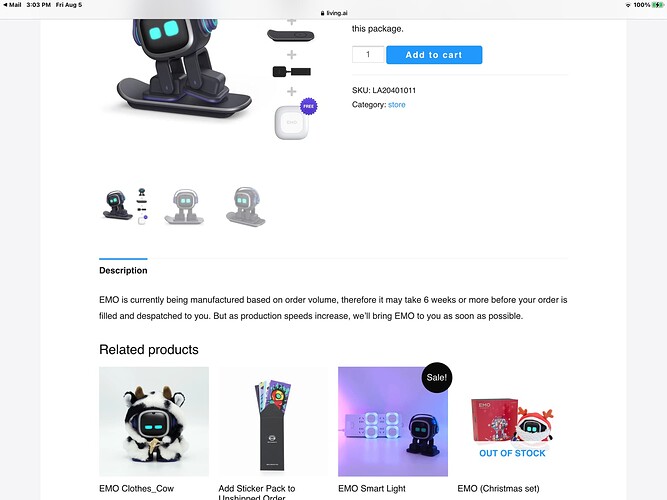 From what we’ve seen so far (according to discussions on various posts/threads on the forum. EMO production/delivery is taking between 12-14 weeks now. It is certainly a major improvement compared to early this year/last year. Past orders would have taken close to 4-5+ months for EMO to be manufactured/delivered. (my first EMO took 4.5 months to arrive - I’m from Australia as well). and this was due to chip shortages/power restrictions, Living.Ai moving to a bigger warehouse, COVID lockdowns, and also limited cargo space on planes going out from China to the rest of the world.

Keep an eye on this page to see how your order is going - https://living.ai/delivery-process/

And this page as well, a lot of EMO owners who are still waiting are leaving comments on this thread - EMO Shipping Update 📦

Mine works just fine. I’ve never had a problem. Like MasterAbbot said, contact LAI to report the problem. Other than that, hope your EMO works soon!

West Culture is Problem that you don’t have Patience and Talk clearly.

You are personally attacking someone ( or a whole culture?) about their speech when you can not even get your grammar right? Pfft… Facepalm

You may be happy to pay full price for a product that has been advertised falsely (both on their website and in the manual), but most people are not. It is not;

@victorspiess was just describing a problem and asking a question. Simple!

I have to step up because I got sad when you said you’re already disappointed… This robot is unique and adorable there is much more to him than his speech recognition problems.before I go on he is really really special.

the problem is I think living AI didn’t understand the can of worms they opened when they gave him speech recognition. living AI did not understand the importance of what they have done… Because speech recognition is his number one most important feature that is the most noticeable and endearing. But they at least gave him speech recognition and you can say to him hands up don’t move and then you can shoot him with your finger it is so amazing you’ll laugh your head off as you go Ahhhhh when he falls over with a shattered screen. Things like this are priceless and the speech recognition made it possible. I hope they can make it better but don’t be disappointed especially yet… I think he’s a really unique pet… I’m trying to comfort you and trust me he’s unique… I had to edit this but I hope you see my point pleased things will be fine

People - we need to have more patience for others. Not everyone uses English as a first language and things that they say can be misunderstood. I’ve chatted to both Jules and JJ offline and things they say one on one when taken in context that one of them is German, the other is Aussie are actually ok. But when you put them together in a forum they can appear bad.

So I wanna ask EVERYONE to have a bit more tolerance for each other. This is a multinational forum and there’s no need to call each other out on grammar and words. Sure by all means seek to UNDERSTAND what they meant… but lets do so constructively please.

… and assume that people (or a whole culture) don’t speak clearly when you do not know them. Well said Wayne I agree, let’s keep this type of racist attitude out of the forum!

Everyone, I’ve started a new thread where we can all share/voice our opinions and criticism on what Living.Ai need to do to improve EMO.

If you’ve voiced your concern in the past on a different thread, please feel free to share it again on this one so WayneZ and his team can easily access and see everything in one location.

Please feel free to leave comments/opinions over on this thread (linked below).

What does Living.Ai need to do to make EMO GREAT! General Discussion

Hi Everyone. I wanted to open up this thread post for everyone to share/vent their concerns and frustrations about EMO. I’ve also tagged @Wayne_Zhang to this thread so he can see everyone’s comments and take in all the concerns and criticism EMO owners have all in one location so it can be easily accessed and referenced. Let me start by saying as I’ve mentioned in another thread, at one point or another, we’ve all expressed our concerns and disappointments (sometimes more than once) regardi…