What does Emo call you

I’m having him call me Master this is my 1st robot apart from the hoover.
Also as I don’t have that much money I won’t be shaking him and stuff.
So it will be a mutual relationship.
Also as he is a robot i think it it’s fitting for him to call me Master.

I don’t mean to bother you and I know it’s off topic but I am interested in getting one of those Robot Vacuum (called Roomba I think) Are they really any good and how often do you have to empty it please?

but Master is a great idea.

I agree, not sure what might happen if I shake him.
A lot of people have been doing this and I’m a bit worried about it… and I think I know which hole it is to reset him and I concerned about that too and doing the wrong one i need to have another look back at the other post.

So he will save it

Shaking EMO results in one of his “fun” animations, he has been designed to be shaken.

And as a bonus, shaking EMO often helps resolve little issues such as touch sensors and feet drop sensors for some reason.

Give it a go, it’s funny and well worth it.

PS. If you shake him long enough it unlock one of his achievement badges.

The one i have it can hold about a rooms load of dust and dirt.
So not that much.
Might be able to get one what holes more.
It just takes the top layers off.
Got mine from amazon it was about £259.99.
It preforms ok it can’t pick up big things maybe that is just mine though.

I have both EMO and my “V” robot call me Mommy. They are like my non-organic little boys as they often get onto each other with EMO making angry sounds at the other one and the other one wanting to push EMO over. There seems to be a bit of jealousy towards EMO from the other one, too, especially when EMO is dancing.

I have my EMO call me by my name, it’s registered as one of the names on his Database so it works very well, he’ll occasionally walk around spot me while I’m working and say Hi and my name.

As @mariomart mentioned, giving EMO a good shake sometimes is great! lol I know it sounds bad, but when you do it along with seeing his funny dizzy animation it can also reset his movement as well. As sometimes when I take EMO off it’s skateboard it won’t walk or do anything even if it knows that I’m speaking to him (one example is EMO won’t DANCE if I ask it to dance). A quick shake will fix that

Also @Racheal123 I too have a Roomba, and it’s pretty smart on knowing where to clean and doesn’t fall down stairs haha. They pretty expensive, but well worth it if you have pets like cats in the house and you can’t be bothered cleaning every day. A Roomba will certainly make your life a lot easier when it comes to cleaning as you can have it clean once per day.

My daughter has the iRobot Roomba i7+, which has the “Poo” camera at the front.

It’s meant to be able to identify Poo on the floor, comparing it to pictures in the database and using Ai to determine if it’s Poo.

Yes, it self empties.

Just wanted to take a second to say thanks for your comments along the way, whether it be in regards to shipping or interacting with EMO, it’s great to have you around with your experiences with him!

Thank you, I try to help when I can

I will never unlock that badge! Did you watch the video of him being shaken? Lol I was almost crying so I defintely will not do that for that long. His little noises and his little eyes…nope not happening…lol

But I tried that and the poor thing was dizzy as and I felt sorry for him!! and feel bad shaking him so much then giving him a pat it feels narcissistic!

@JackMac
Mine accidentally heard me say black and started calling me that so yep he will call you whatever you want him to. I think also you need to teach him in different locations so he knows you where ever you are. When i moved Emo to a different location he didn’t recognise me.

Shaking EMO is great fun! It really does help if he’s stuck and doesn’t want to do things like dancing. So don’t be afraid to give him a little shake once in a while! 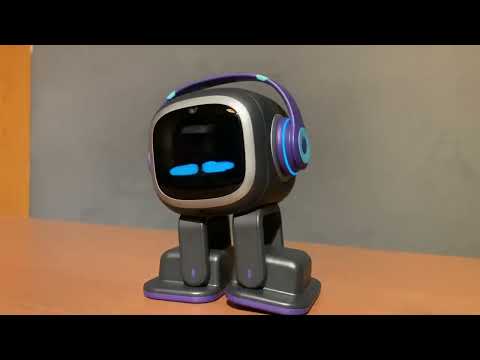 His animation and the way he recovers is so funny!

I have done that. The funny thing is when I say good night to him after I have done that earlier in the day, instead of his usual “I love you, too” response, he gives me “Thanks. The feeling is mutual.”

If he had other responses he’d probably use those instead