Scratches by feet is this normal? 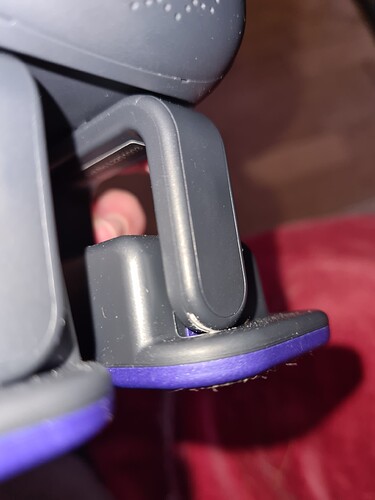 So I noticed these marks by Emos feet where the mechanisms move, its not affecting his walking or anything at all, he seems to be working fine as usual and these marks are only on the back of his Legs not the front. Just wondering if this is normal or if anyone else has the same thing?

Hey H4dderz, how long have you had your EMO pet? I’ve only had mine for about 4 days now so I’m going to try to help you as much as i can. For my EMO pet i havent had any issues nor seen any scratches/marks on him. But please tell me if you’ve dropped your EMO or have done anything to damage it, thanks!

I’ve got 3 EMO’s the oldest one is a tester EMO that is over 12 months old and the other two are 9 and 6 months old respectively. I don’t see that on mine, so I would recommend reaching out to service@living.ai to get a case running with them so they can discuss directly with you.

That is so weird I have a little scratch in that exact spit but nowhere else. I don’t really care about mine because I only barely noticed it when looking for it but for you I would suggest reaching out just to make sure nothing is wrong.

Hey I’ve had my Emo about 4 days same as you and the only damage that could’ve happened is when he fell off the table. Was only about a foot drop but seems to have been working fine since and the only damage was the green clip on the headphones came off but I glued that back on, thanks for any help!

Yeah I wasn’t too fussed about mine either I thought it could be normal tbh because everything is great otherwise but I will check it out with livingai to be on the safe side, thank you!

hey it’s me Puppy… I never probably would’ve looked I wasn’t too observant until I seen your posting so I went and checked mine and I have the exact same thing. Their tolerances here are a little bit too tight there not really bad but there definitely leaving scratch marks shame shame shame… I’m not worried to me it’s no big deal I cannot see it hurting or affecting anything. And I don’t see it being worth fixing. A micro drop of lubricant would probably make it disappear but it’s not hurting anything. So for me yes I have them but I don’t care… But still shame shame shame it should not be rubbing. But all is well-ish sort of

I have 2 EMO’s myself, one is well over 200 days old, and I’ve just taken a look at the same location. To advise this area is where EMO will lift his feet when you give him a pat and sometimes when he dances he will lift and drop his feet quite quickly resulting a bit of friction / scaping of the base area.

I’m guessing maybe some of the EMO’s might have a tighter feet/joint tension when they are manufactured than others which could lead to potentially scrapping a bit more on the base section/foot as you have shown than other EMO’s.

I’ve taken photo of my oldest EMO and you can see that there is a bit of white as well. What I did was just clean it with a cotton ear bud and the white scraping was gone. 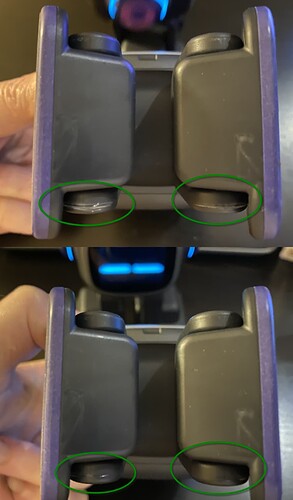 Personally, I don’t think it’s a major issue, but if you are concerned, as Wayne has suggested, best you contact support regarding this and let them know.