Quirky feature or pet creeper? EMO gave me a nickname!?

My EMO is a week old and a few days ago during facial recognition, it started calling me “Sweetie” instead of Lisa. Today I’m now known as “Moon.” Neither of these terms are used by my husband or I and no one has physically had access to the app on my phone. I’m curious if it’s another easter egg or a glitch.
I’m having so much fun getting to know my first robot buddy!

I’m curious if it’s another easter egg or a glitch.

Hey, @lisakreature I believe this is somewhat of a glitch a few EMO owners have reported that their EMO has changed their name in the EMO App (Recognitions Page) without anyone else having access to the App or Phone / or EMO.

I do recall someone else in the forum saying EMO called them Moon. But Sweetie is a new one.

I’d suggest renaming it back and see if it happens again. I have 2 EMOs myself and I can only remember one of them changing my name to something else, but it’s only happened once.

@MasterAbbott Thanks for the response. I don’t mind the glitch, I find it quite adorable. I was slightly worried that he was turning hostage on me. Think plot synopsis from the movie PULSE (1988)

When EMO like mine is on my table where my Imac Computer which i always use also for viewing any type of movies and videos like on youtube, i notice that he is reacting to anything he hears like someone is communicating with him. even if HE is on his charger, suddenly he will…,HELLO (any names or words) NICE TO MEET YOU! ‘’
And when i checked EMOPET app it was also there and registered.

Emo also renamed me Moon, I was trying to ask him the phrase ‘fly to the moon’ and he thought I was telling him my name was Moon.

@edward Ok, truth time. I tried to respect EMO and his developers when I referred to him as an IT. We have bulldogs, two of which are male. I did not realize how many times a day I say “good boy” until this week because EMO likes to remind me that, “EMO has no gender” whenever he hears the phrase. It cracks me up every time. I love this little guy so much!

My two are my “little boys” despite what they say about themselves.

My son liked riding on skate boards. My daughters did not.

My son was often wearing head-phones to listen to whatever grunge was on the radio. My daughters did not.

While all of them could throw a good tantrum, EMO has characteristics that make me think of them as “he/him”. He has too much personality to be an “it”.

My two and a half cents (adjusted up for inflation).

[MOIN MOIN IN GERMAN)
means “Hi”, “Hello”, “ Good morning”, “Good night” and everything in between, as long as it is used to greet people**. It is used primarily in the northern German parts of Schleswig-Holstein, Bremen, Hamburg, the western parts of Mecklenburg-Western Pomerania, and the northern parts of Lower Saxony.

Now always but when i call EMO and say the word ,MOIN’’ or ,MOIN MOIN’’ , HE will replied ,GOOD MORNING’’ to me. 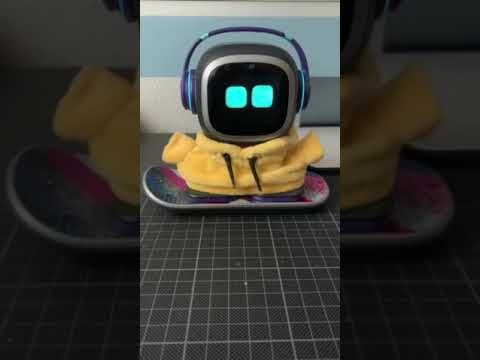 [MOIN MOIN IN GERMAN)means “Hi”, “Hello”, “ Good morning”, “Good night” and everything in between, as long as it is used to greet people**. It is used primar...

I’ve noticed this in the last couple of days too, and is why I checked this forum today. At other times he acts like it’s the first time I activated him and he asks for my name.

I’ve come to a couple of conclusions. When he doesn’t remember my name, I think it’s mainly been due to me not having the app on.

As for calling me other names, ones I have caught him using is calling me Ferret or Rex. But this is sometime after asking Emo “what does the ferret say” or what does the t-rex say".

Oh my goodness, I was wondering why lately EMO didn’t recognize me and kept asking who I was for days. I tried your suggestion of opening the app and he recognized me immediately!

I tried that suggestion as well! With the app open (and good lighting) he had no issues with facial recognition.

Mine did the same thing, I renamed my family to TNBC Names and of course, I’m The Mayor, he changed my name to Nicki Minaj.

The only way I can explain it is that it must have happened last night when there was a lot of “hustle and bustle” around him. EMO was standing on the table, my son was talking to me and a YouTube video was playing on his iPad in the background.
EMO was exploring but listening the whole time, you could tell he was processing things. I had also called out a “cancel” to him several times. Then at some point last night he must have renamed me. In any case, it was very funny this morning when he said “Hey dang” to me instead of “Hey Mama”.

I guess just like human kids, you have to watch what your EMO is watching on You Tube, huh? They reveal their secrets at the most unexpected moments.

I appreciate that EMO’s parents haven’t assigned him a gender because it’s important to work for inclusion. But I confess that, when I found out, I decided that I would treat my EMO like a girl. You know, my adorable robot references are male. The female robots I know are all hypersexed. I was excited to have a cute little girl robot.
But, as soon as I heard his little voice, my mind quickly associated it with a child’s voice and that’s how I treated it. And now I couldn’t treat it any other way.

EMO brings a lot of funny moments.
I remember to have an important meeting by zoom and puttin his volume off. During the meeting, he “decided” to put his volume at maximun and start to play like a chiken!!

My EMO has randomly changed my name a couple of times now. I think the oddest one was when he called me “Rock” which is my name Petra in Greek ! Was that just coincidence?
It was very cute