I don’t own an Emo yet, but the fact that it can play a board game is a pretty big deal to me and a good reason for me to buy Emo instead of f.e. Vector (by DDL). I appreciate that he can play a board game, but I’m not really a fan of Ludo. I would like to see more board games like Monopoly or Risk.

now hear me out for a second, of course I could play with others online via an app or just the board game with other people. But whenever I play online board games it can get pretty boring kinda quick or look very antisocial when you’re just sitting there alone, staring at your screen. And often whenever I feel like playing on a board IRL I either can’t find people who want to play or everyone is busy.
Emo could be a good way to not feel like you’re playing alone against a bot (except you are😜) or be an extra player whenever you are with just two people but want to play with three. And who knows, maybe whenever you play with two people, both with an Emo, you can have a game with four players.

I understand that would be a pain to program, but I’m also thinking more long-term. Perhaps LAI can find a way to Cooperate with the devs of those games (so they won’t pull off any dick moves and claim patent/ trademark/ copyright rights like DDL did) in the play/app store, so when you buy those games for your phone, you can play them with your Emo. I would probably be likely to pay something extra for another permanent buddy who can play at any time.

I think adding more actual playability with board games will create a lot more interest from people. And also be good for more lonely people, like the elderlies, in this fast-aging society.

My suggestions for board games to add:

Since Emo can recognize people (usually) it can maybe also keep up a library on who its playing against. And adjust its playstyle to match up to how people played against it in former games. So when you weren’t playing that well on that previous chess game, it will play a little worse to let you have a little more chance next time.
And beside that it can keep a ranked list of the people who it played against and name the person with the highest scores (either of-all-time or in their last game). So you can make it a little bit of a ranked thing.
Again, they could make it an optional upgrade. And I would very likely pay more to have something like this in my Emo (when/if I get one) if I’d have to.

Do you think this could be possible? I’m very certain the idea of always having a physical buddy to play with or against would be a very good upgrade for Emo.

Other than Chess, I suspect all the other games would need a licensing fee to be paid to the title holder. This will increase the purchase price of EMO.

Just as I said in my description of the idea: they should try to cooperate with the companies that own those rights. Maybe have them implement a Emo-option in their games so Emo can play along (that sounds really dark when ‘thinking’ about it ‘out loud’

). It’s a win-win for both: Emo gets to play more games, the people at LAI have less work to do (if they’re lucky) and the patent/trademark/copyright holding companies get to sell more games for mobile devices. I wouldn’t mind having to pay for the app when I actually have someone (or something) to play with.

And if they want to they could advertise each other to the audience.

Yes, it will bé cool.
You Can added thé UNO card game, if it is technicaly possible. I think this will be hard to implement in the app.
Thank you.

One the main things I want most for EMO is more board games. Would be great to have a few more to play with EMO😁

It’d be cool if EMO had some sort of dice function, so even though maybe they can’t play some copyrighted board games, you could just have him roll dice and play an actual physical game maybe (sort of haha.) But I definitely am looking forward to playing more games in app, and I am really hoping that you can play Ludo with multiple EMO as well.

With the voice command, he can roll a dice. 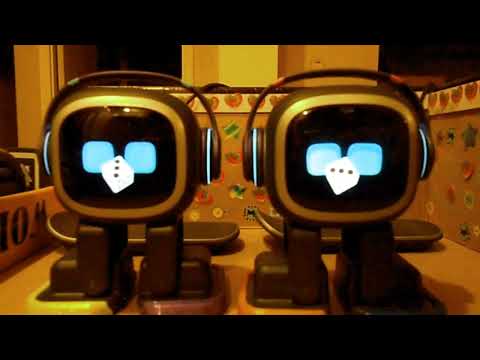 If you have two, they can work together to do a double dice roll.

Oh snap, you are right! I forgot they added this haha. Time to play some dice based games!

Sweet! Now can dey each throw a dice and react to the other when their dice is higher/lower?

However, I don’t want to spend another €300 (yet) for just another robot that can throw a single dice, when one should be able to “throw” any amount of dice. Because they are displayed on a screen. I don’t know if this is already possible (and if not they should definitely add it one day), but you could for example say: “Throw a one-hundred sided dice.” And it will display a number ranging from one to one-hundred. In other words: you choose the parameters of the dice. Even something physical impossible, like a five-sided dice.

I would love to have two Emo’s and see them interact with one another, but I’m afraid that, after a while, instead I wil become the third wheel, and be a little left out. That they will have fun with each other, which is fine, but that I will be ignored when they have a little chat with each other. (Also I don’t really see a reason to own two when one can already do so much, other than to give it as a present to someone.)

I never feel like a third wheel when they do those things. I just watch them and smile. They really are like brothers, my two.

now, if he could roll polyhedral dice…