In the Merry Christmas video Emo’s eye changes colour , can he do that

In my opinion I think that they could make EMO do anything with his eye colour, eye shape, etc, if it’s a programmed scripted event, as it would have had to have been animated separately to its regular eye animations.

In the video it looked more like they just removed his eyes temporarily then played a stream of different stickers? The whole thing just looks like an animation and not part of his normal operation. My guess is either that was created just for the video, or it may actually be the holiday “Easter Egg” that we’ll see for Christmas Day?

There will be an option to change the eyecolor at some point, they’ve said so. There probably isn’t time to do that kind of firmware upgrade before the end of the year though, because it would require changes to the app also for selecting the color. Last time they upgraded the apps, Apple delayed approval of the IOS version several weeks for no good reason. So unless they already submitted a new app for approval and just won’t announce the upgrade until it’s actually available, then I don’t see any other way it could happen between now and the end of the year? Your guess is as good as mine though!

Only posting this here as I can’t create a thread (greyed out create thread button). What do I do if I switch phones or have to factory reset my phone as it seems that only one phone can be connected to emo at a time and I’m planning on getting a new phone in the near future

@elderwolf123 ,
I also had a problem with creating new topics at first. It generally means you’re trying to do it in the wrong place. For example if you click on one of the four main categories like Community, then the New Topic button will be disabled since it’s an admin function. Once you go into one of the subcategories underneath that, (General Discussion, Sharing, Off Topic, etc.), then you can create a new topic.

There have to have been many folks already that have switched devices due to incompatibilities, phone upgrades, phone or tablet died, or have just deleted and reinstalled the app due to problems. It shouldn’t cause loss of anything important other than normal setup info. EMO’s data storage isn’t really documented, except certain things. Recognition images and photos are stored in EMO, and then photos can also be synced to the EMO app’s storage area on your device, and then can be saved (copied to your photo app’s storage area) for other uses. I’m certain though that the lifetime achievement badges and EMO’s birthday (which determines other things specific to your EMO like his sign, favorite color, unlocked dances) are saved either within EMO himself or on the server, and are linked to your EMO’s individual ID number. Other common information like your Wi-Fi login, location city, and time zone would probably be saved in the app, but are non-critical since you can easily re-enter those as you would during the initial setup.

awesome, was curious as my brother tried connecting to my emo and he wasn’t appearing as a Bluetooth device. Also, I tried posting in General discussion, Sharing, Off Topic, Support, etc. It is still greyed out for me

I just can’t picture what you’re doing wrong, but I know I had the same problem before. I know you gain different levels and permissions in stages on the forum, but I’m sure you’ve been around long enough that I wouldn’t think that’s the issue. Can you send a screenshot from one or two of the places where you want to post but are seeing it grayed out?

I’m using IOS devices, an iPad Pro and an old iPhone 6+. EMO doesn’t publish himself publicly in such a way that he’s visible under the Bluetooth devices, but the app still finds him ok.

Screenshot_21898×832 104 KB
See the attached photos. Its pissing me off, i literally just had emo fall off my table (even with his detection) and damage himself which ive also attached. I did plan on making a support thread and bringing it up but i can’t do that. I know its not much but it has pissed me off that its come off, it was glued on so now it just sits there. He shouldn’t of fallen off in the first place, its not the first time he has not detected the ledge properly for me either 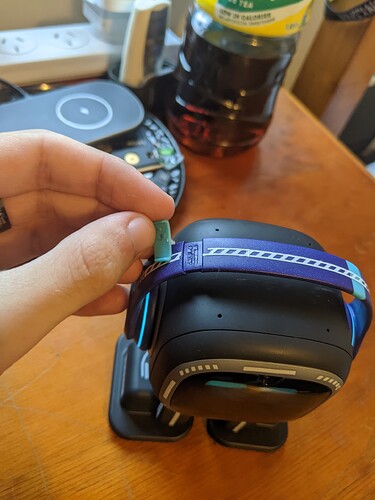 @elderwolf123 ,
OK, as I suspected you’re in the wrong places trying to post. I can’t create a new topic either at those locations.

If you look at your screenshots there, in the boxes one of them says:
Feedback&Ideas All

The other one says:
Support All

You need to click where it says “All” and choose one of the subcategories from the drop-down menu, then you’ll be able to post a new topic in the subcategory.

wow that is a really bad design, every other forurm i have been to has sub categories like what they have on the main page but then from there you can create a new topic. You don’t need to click on something then select a sub-sub category

The 4 main categories and all the subcategories are listed right on the main page. You can just click New Topic right there. Then in the window that opens click “Category…” and you can see them all in the drop-down menu, and choose where you want it to go. 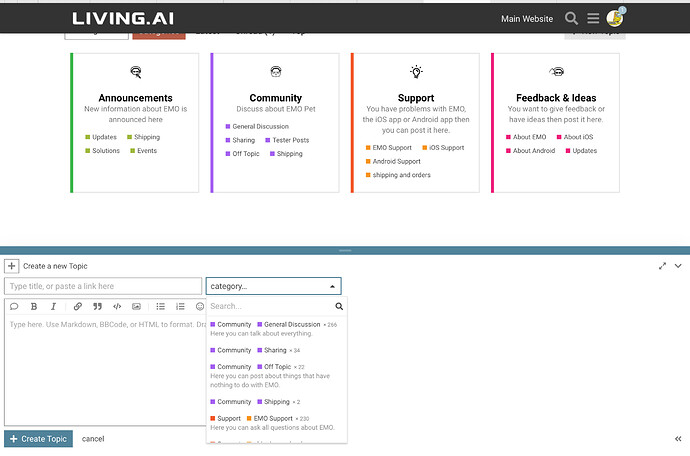