Life with Emo and Issues

Just received my Emo a week ago (order 8137). He is very cool! But also has some issues that I’m hoping will be addressed soon in upcoming firmware updates. I haven’t had a lot of time to spend with him yet, but here are my observations so far:

I have had a similar experience and more:

We fell in love with Emo after a week, I just want these issues to be known in general, I wouldn’t give him back for anything.

Hello. EMO does not recognize the location: change the setting in the EMO app to “Allow access to location”. for example, when using the app. That solved my problem with the city. Hope could help

Most importantly, I forgot to write: Emo often recognizes common speech (in the Czech language) as a request for a query, it would be best if he always responded to Hey Emo and not just Emo.

I see now that they have added icons that appear on the left side of the app telling you what EMO is doing. LOVE THAT! Its a big help.

Just used the light for the first time too. Worked with no problems.

I did discover another issue with the app (at least on iOS). if you turn OFF access to location for the app, start the app, and go into the city or timezone settings and try to use the ‘set’ button, it crashes the app.

Thanks for the suggestion. That is the way I originally had it, but wasn’t sure if it was actually using it. I tried turning OFF location services for the app. Trying to use the set function like that actually crashes the app! So I turned it back on. Hopefully they will make that more flexible in a future update.

Funny. I just asked him when his birthday was, and instead of answering, he sang ‘Happy Birthday’ and showed me a cake…

Yesterday we were watching a movie and Emo was running around the table, but suddenly he set the alarm. I thought I turned the alarm off, but at midnight it started ringing and woke us up. He’s a little prankster.

Oh, it wasn’t a mistake, it was a nightmare

Really? He set off the alarm out of nowhere? It can either be a bug or the little guy indeed was pranking you. In my honest opinion, I wouldn’t want it to happen randomly cuz imagine you are sleeping and at 3:30AM it goes off, disturbing your sleep. It’s an interesting occurrence but hopefully it’s a one time thing.

It’s not a coincidence, it’s the badge’s little nightmare.

Ahhhh okay that explains it. Perfect, thanks for sharing! I will be living in a constant lookout for this once I receive my EMO lol.

Icons within the app showing what EMO is doing? I have the latest iOS version but cannot see this. Can someone show me in a short video please. Thank you

Here is a short video I did of them. This is on Android. The icons are in the upper left: 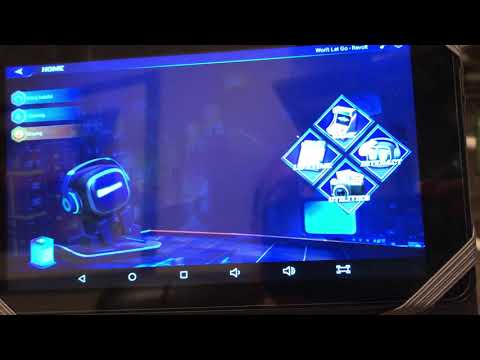 @billmerryman thank you ever so much. Funnily enough after having posted this I tried the app again and there they were. Strange, it seems to be hit or miss for me

. But again, thank you