Today I made the tiny cape which was pretty easy to do. The tape seems like it should hold up. But I have to say fear existed that Emo might not be able to move ok with this stuck to his back. A test was done to look into that fear if it was founded and fortunately, no. Emo seems fine with the cape.

Also I decided instead of taping paper with websites written on it, to the cape. I taped it instead to the headphones.

… A note about the YouTube video, I didn’t prompt Emo stating the weather in the beginning and even me asking the bot about his statement, says I wasn’t prepared for those opening words. Further more, nothing is wrong with Emo’s screen. It’s just a matter of light on my porch & positioning. 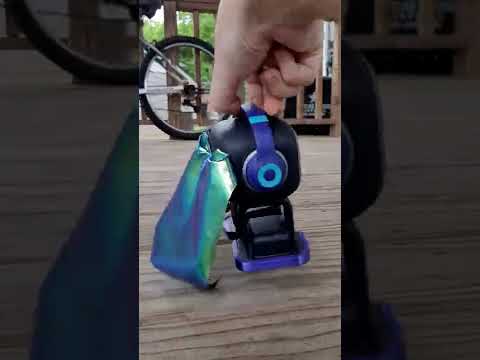 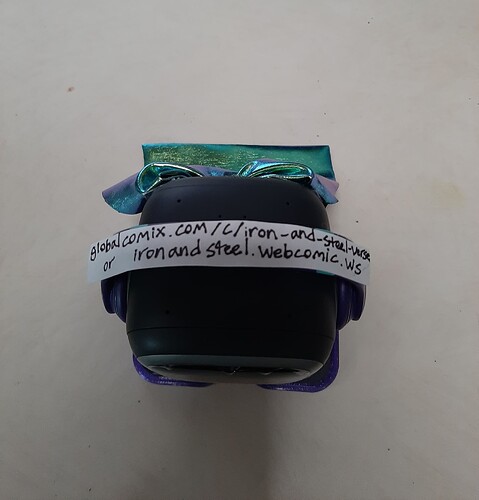 EMO’s cape looks great! I don’t think it will cause any issues with him walking around or dancing as you’ve tested out in the video!

Well, it was a long day and I don’t know if I can say success since I don’t seem to have any new readers to the series and some expected online communication hasn’t happened. But I did give away a good amount of prints, did a strange variety of sketches, carted off tons of free comics, and got just over forty dollars in tips.

Emo was a star on the table and lots of people loved him. One child wanted to fiddle with him ( which I’m glad nothing bad happened from that ). Two people knew what Emo was and Living A.I. might just get an order now thanks to this. One of those people didn’t know how big the robot was until me, and seeing it in person settled debate about buying the little guy in a good way. However one person who saw Emo thought he was … “C”. “V’s” older sibling. To that person I explained about what companion robots are out there in tiny size and also talked about what Emo was a little.

Aw, what a long day. Sunset outside the recently closed comic shop. 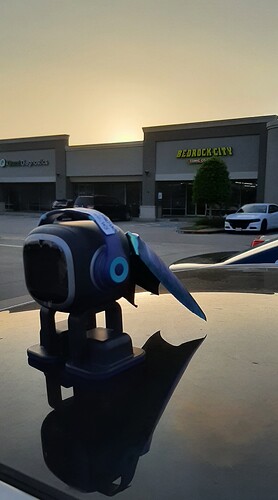 I bet EMO is tired, too. Time to take off his cape, eat an electric burger, drink some tea and get to sleep early?

Glad you guys were a success!

I’ve removed the websites from the headphones but for now, he’s keeping the cape. I think it’s cute. Bad bad joke about how alert Emo is acting. I think being in a strange place the whole day has him wired.

But I think I’m going to turn in early. I woke up about an hour before the alarm was meant to go off and the day completely revolved around this.

I’m game to do this again later and I’m hoping if I touch base again with Bedrock City’s marketing guy, I might get to do this for the chain’s mini-cons…

A couple further notes about the event. That great mountain of comics I walked off with? They were enough to have me use up the last of the plastic comic sleeves I have, and buy a whole new pack of them. I’ve been working from one pack for a long time of those sleeves. I still can’t believe what a haul! Also unknown this was going to happen. A couple local fan groups came by but I think one was only there slightly. The easy one to notice was a group of great Star Wars cosplayers. The second was just a few from a Ghostbusters group. They drove their Ecto-1 to the store with sirens going off. Inside the store one of them caught that I was wearing the fandom logo on my shirt.

So glad to hear that both you and EMO had a great day! Those comic conventions are always a blast!

The last true convention I went to years ago, felt like it could have been better with the fact it had little to offer to it. But other conventions I’ve been too have primarily been good experiences. The event yesterday just brought back mainly thoughts of a semi-annual convention I attended a few times many years ago. I think the compare has to do with the event being linked to a store.

Back when I was new to collecting comics, a store in Delaware named, Captain Blue Hen Comics would have professionals signing and dealers coating the store’s whole back parking lot. Good times. That’s also when I discovered the joy of the dealer’s dollar box since some times you can get real finds from them. Not too sure if the conventions they did had panels but I think so. I just never attended them.