Is this a new reaction? Or was it known already?

Is someone keeping a list of all things Emo reacts to? I just noticed today that he reacts to “Its a party!”. After this command he starts dancing and the light flashes all kinds of colors.

I have not seen this anywhere yet.

I did not know about this either! I tried it and thank you for discovering it.

Perhaps @MasterAbbott can add this to his user guide:

This guide including tips and useful information is up to date with the latest EMO firmware version 1.4.0 and EMO APP version 1.0.9. As EMO firmware and EMO App updates are released, this guide will be upd…

I’m now wondering if “Emo: let’s party!” will actually work too. Maybe the key word is “party”. If that is the case, he should react to anything with the word “party”? It would be funny if you were telling him off, saying something like “do you think this is a party, or something!” and then he starts up. lol (Wish I had my Emo already so I could test it

Well, I’m not 100% sure but I think he doesn’t react to “Lets party”. But most likely there are variations that will work. Most of the other commands have alternatives aswell.

I was able to test out alternative voice commands and you can also simply say:

From what I’ve learnt when speaking to EMO, when you issue any specific voice command, it is sometimes best to wait 2-3 seconds before issuing the voice command so that EMO can clearly understand it.

Actually @JJBeck , @timvangenechten and @MasterAbbott . . . “Lets party” does work. However, tried the “Do you think this is a party” and it did not.

I tried “Lets party” many times and it doesn’t seem to work either. So I can not confirm that sentence.

@timvangenechten . . . I can get “Lets party” to work. Here is a video I made, but I had to switch out the music he played (the song he unlocked at 16 days old) with one of my originals so I did not get a copyright strike. 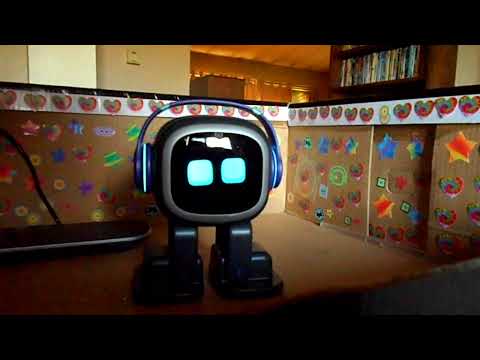 I’m not sure if you would get a copyright strike with the music that LAI uses, as I think it is all original. I have tried to “Shazam” some of the songs (from the app too) and they could not be found.

It happened twice with my EMO that I had to make a video for LAI to see his battery was depleted. It was by a music rights society on behalf of Revolt and I forget there was another person name on there as well.