When connected to an iPhone (tried on 2 separate ones) it didn’t play the music. Volume is high and not muted on both iPhones and EMO.

There is a mute control for the background music in the app itself (the musical note symbol at the upper-right). As far as I know it’s still on by default when the app is first installed, and someone would have had to turn it off. I assume if you only reinstalled the app that the preferences would be preserved and it would still be off? Older versions of the app didn’t even hold that setting, and if you quit and relaunched it would be back on again. Since the last upgrade it will stay muted even if you quit and relaunch the app, unless you actually uncheck it.

Other than that, all I could suggest is to actually delete the app then reinstall it. You won’t lose anything. 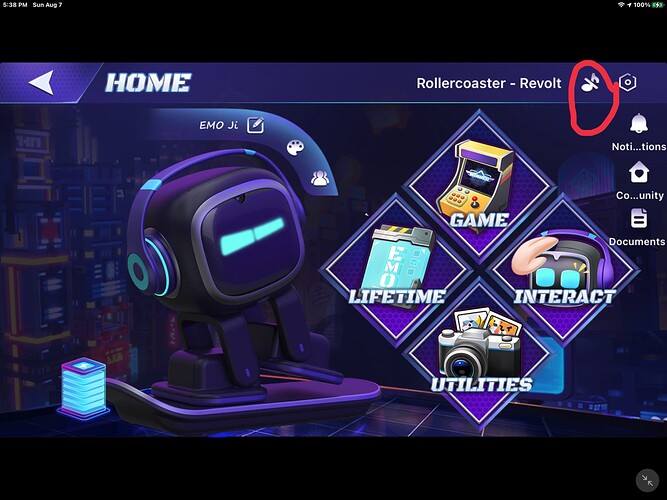 Thanks for the response, but neither the app nor the iPhone is muted and both have the volume at a high level. It happens on 2 separate iPhones. I’ll try it on my iPad

Have you tried to uninstall the iOS APP and reinstall it again? I’ve tried it on both my iPAD and iPhone and the music is playing and the mute button does silence the music when I press it.

(and also confirming) with the iPhone, there is a “Silent Mode” switch on the side. is this on or off? when I switch that to OFF and the music note is not muted it also doesn’t play music.

@MasterAbbott ,
Good catch! I just tested that and you were correct, it will prevent the music playing in the EMO app. I was going to mention that switch to them but they kept insisting that neither phone was muted? I normally keep my ringer switch off at night so the phone doesn’t ring, but I will still get sound in Facebook or through Safari. In the EMO app though it does prevent the music from playing. Interesting question is whether that’s actually a bug in the EMO app, since other programs will play through but it doesn’t?

Normally if you have the switch set to Silent (NO Sound) as you said, some apps will still play sound/music if you press the volume up using the side buttons that are located right next to the silent switch. I know this is the case with the Instagram App for example, I normally have my phone always on silent mode, and If I want to hear something I just press the volume up and it will play sound. (but in theory, it shouldn’t as it’s technically in SILENT MODE haha.

But in the case for EMO App, I think the App is actually doing what it’s meant to do. if your phone is on silent mode, even if you press the volume up or down it should still NOT play sound unless you take it off silent mode haha.

I have an old iPhone 6 Plus with limited memory so haven’t upgraded the IOS software in a long time (years). So mine works a bit differently than yours. I don’t have to press the volume controls to get sound in FB for example even with the ringer mute switch on.

And that is also another potential reason why certain things might or might not work with the EMO App or even other iOS Apps in general. iOS software could also potentially be a problem here as well.

I’m currently on the latest iOS firmware (15.6) but the sound/music playing on the EMO App was also working even with the version prior as well.

Thanks folks. I was out of pocket the last 2 days and was finally able to try your suggestion this morning. Yep! The iPhones had the ‘DND’ switch set, so even though they weren’t muted to Apple Apps (iTunes, Youtube, etc), it wasn’t relaying the EMO music to the iPhones.

Great to see all is working once again!