How to Power On EMO without charging pad

Is there any way to Power On EMO after he has been switched off by APP or voice command without putting him on the charging pad?

Yes but i don’t like it.
1 of the holls in his head you put a pin in it.
Also holding his head down on a hard surface is another.
Won’t be doing that when i have mine.

Which pin? I’ve tried putting him upside down on a flat surface but does not work. Am I wrong?

How is it possible that there is not a more easy way for powering EMO on without the charging pad? 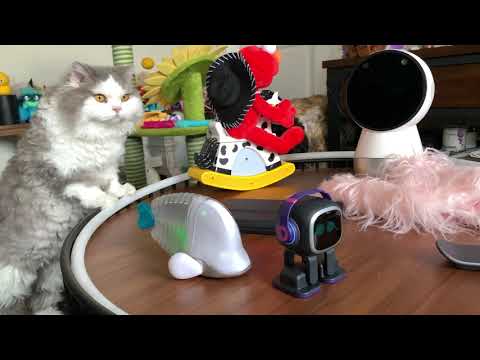 I know this says turn off but you must be able to turn it on this way.

Don’t go poking into the holes without knowing what you’re doing. Four of them are microphones and could be damaged that way. Besides it sounds like he was trying to give a bad description of ways to shut EMO down, not to power him up. You can only power him up by placing him on his skateboard or another QI wireless charger.

Pushing on his head petting sensor will recalibrate it. You just need to lay your finger across the whole top head petting area while holding him upside down. It’s easier to use a thin paper clip in the reset hole for me.

Are these procedures to recalibrate EMO?

She is turning EMO off not on as I was looking for.

Are these procedures to recalibrate EMO?

At this time there is only one recalibration procedure you can do (if necessary), that’s to re-calibrate EMO’s head petting sensor. That is the only reason you’d need to press on his head. Pressing is not necessary for the shut down procedure.

No to turn off and on i don’t like it.
People complain there Emo is broken.
But heres why it’s only plastic and technology.