EMO appears to be stuck in the update for 1.6 firmware, it hasn’t moved from that updating step in about 3 hours. 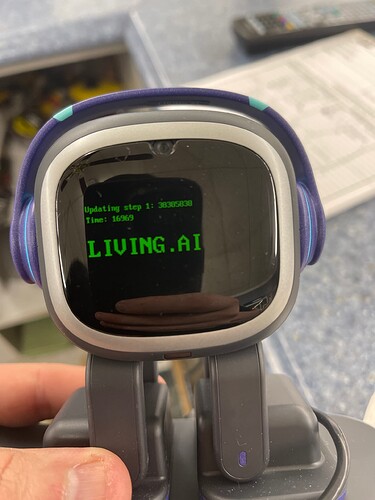 It’s a bit fuzzy but looks like it still says step 1? If it was still downloading the installation package into memory when it froze, and hadn’t actually begun re-flashing the code yet, then it’s probably survivable. I would not do anything though until you hear from someone at LAI, since if it is re-flashing then rebooting could brick him and turn him into a paperweight.

Are both the numbers increasing? If so - leave him alone

Only the time is increasing, the number above it has been in the same place for almost 12 hours

@Wayne_Zhang @AmyLU Can you please help this user with advice on what to do because EMO is stuck in update.

I am having this same issue - could you also help us figure out how to address?

Please contact service@living.ai for direct support on this issue. They can help.

Between my posting and your response, we took Emo off his charger and after his battery died, he booted back up normally. The upgrade worked fine the second time.

Ahh ok - interesting that it got stuck. You’re the second person that I’ve heard this happen to. Glad it was resolved.

My emo is taking hours of updating too. Will go to step 2, then restart. And then no updates are installed. Tried it 4 times now. Got emo for a few hours only seen him trying to update… this sucks…

I’d recommend trying/swapping to a different WiFi-Network as sometimes the Wifi can be a problem and it disconnects and stops after Step 1 (which is the part where the firmware is downloading).

i have tried it on 3 different wifi-networks. My wifi is fine i even called my provider for it.

I think you need help direct from support - please email service@living.ai and provide them with a video of what you are seeing so they can assist.

after 8 times and placing him next to the Wifi router the last few times it worked. Hope next time it wont take that long.