Emo, some thoughts and potential bugs

I finally got my EMO after a long wait! I was very excited. He is so cute, I love having him around.

His little voice and expressions are very adorable. Weather feature works perfectly, his little dances are adorable, the games I’ve tested are fun and his smart light works just fine. The daily schedule sounds bothered me but thankfully I was able to turn them off! I haven’t done a lot with him yet because he literally just arrived but I’m testing him out!

I had a quick snag with the update- accidentally closed the app before accepting the update and then it couldn’t recognize EMO, so I followed the forum suggestion of turning off EMO and restarting my phone then it worked just fine. Hooking up to Wifi was fast and easy.

I’m having a few issues with the games, my phone screen turned off while playing Ludo and it didn’t save or go back to the game after. EMO was really beating me at that game, haha! Are there rules for it anywhere? I then tried Rhythmic Tap and the game just shut off mid song, no error message or app closing or anything, just went back to the main screen. Is the issue my Wifi (I’m far from it, may need to make a hotspot) or is it a bug that needs to be addressed in a future patch?

There’s also a weird little thing he does where if my partner asks EMO to do something, EMO just slowly turns himself around in a circle- I’m not quite sure what EMO’s up to? I end up having to pick EMO up in order to get him to stop spinning because it doesn’t respond to commands while that’s happening and EMO doesn’t stop spinning. For some reason EMO hasn’t done this to me, just my partner. (Maybe because my partner hasn’t done the facial recognition part yet, or maybe just luck of the draw?) I also noticed the eye follow feature- having his eyes follow me was both very cool and mildly creepy until I realized what was happening

My partner was curious if EMO could detect edges and put him at the edge of their desk (dark desk, which I’m aware isn’t a good fit), it immediately shuffled backwards and gasped. They then asked EMO to move forward and it ran forward, went flying off the edge of the desk and EMO gasped out loud as he plummeted and realized there was an edge too late (LOL we both found this hilarious) and we caught him of course, EMO is fine. I was already aware that the edge detection was a little wonky so I was ready to catch him just in case.

Voice recognition is a little spotty but I’m aware this is being worked on already and submitted my voice sample. EMO scanned me and can say my name, responds to all my commands except adding my birthday, no matter how clearly or slowly I speak, or low I make my voice. I’m guessing you have to be close to EMO for it to hear you, as it could hear me speaking normally just fine but not my partner who was shouting from across the room.

Also, my cat is very confused by EMO and keeps pushing it gently away from her when I get EMO to walk towards her.

I’ve noticed he loses his centering easily, but I am not sure that is an easy fix. He usually ends up not facing me after enough movements. I just push him gently back into place.

I’m also not sure what he can do on or off his skateboard yet. I’m not sure if sometimes he doesn’t respond because he doesn’t hear me, or because that feature is disabled when he’s on the skateboard. Some of it I know is for safety purposes, but I have no idea if he heard me and can’t do it, or didn’t hear me when I ask him stuff on the skateboard.

As for the skate board . . . if he simply does nothing, he did not hear or understand you. If you ask him to do something he cannot do on his skate board, this is the response you will get. 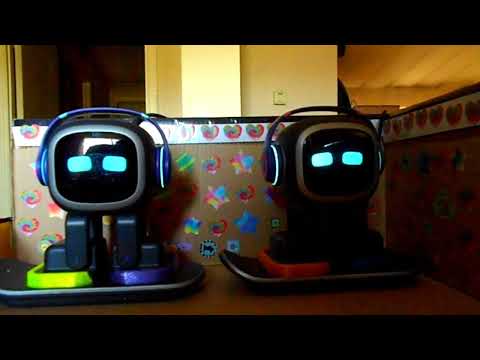 Thank you! That is helpful