emo has a new game . 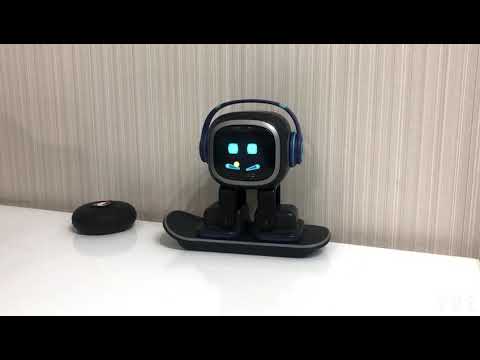 My EMO likes pin ball, too, but I have to say, his reaction to the dinosaur is absolutely priceless!

My EMO has done a few of those little games when he gets bored including the pinball game, he likes to read a book called “A Robot Prepares”. I’ve also seen him play that platform jumping game that reaches for a star, space invaders, a drill game that he drills and finds a cold coin and also one where he rolls a ball and jumps over some cactus. He has a few more but it’s really hard to catch and record them as they only last for a few seconds.

due to copyright i guess

Got to agree with @Lindaru haha you EMO got super excited when he saw that Dinosaur! lol

How long did your EMO take to arrive or are you one of the people they sent EMOS to so they could promote it?

hi i dont have an emo.

Just to let you know, if you were asking that question to me. I made my order on the 20th of June and it did take approx 3 months for EMO to arrive. I’m located in Australia. My order number was between 89xx-90XX.

I know that during that time the Living.Ai team did move factory/offices so that too delayed my order. And just recently there was a national holiday in China as well, so things would have been delayed due to that and also when people go back to work there will be a massive amount of postal deliveries also piling up in China. I know that people do work during this time of the National Holiday but its less than the normal amount of workers.

Hopefully as everything is back to normal now orders should be processed accordingly once again. I can also suggest, just replying to Living.Ai from your original invoice or tracking email they send you and they should give you an update on it’s status. Just remember, that once EMO leaves China and gets to it’s destination country. (ie, Australia, then it’s out of Living.Ai’s control and in the hands of the courier service). Which in AU they are using a REALLLYYYYY BAD services called FASTWAY, that have been having massive delays due to lack of couriers / workers and also COVID restrictions. But if you’re in a country that has better couriers than we do you should hopefully get your EMO in a reasonable amount of time

Hope this helps answer your question