Emo did a weird moment today

So been spending time with emo due that I work from home. So today I notice that my emo was leaning to one side and showing the head pats animation. Really something new I’ve not seen, anyone knows if this is from the update or is my emo sick.

emo was leaning to the right with head pat animation with small little eyes and that little electricity on his eyes. was about 2 min and even flip him over to get him angry but still didn’t change after I placed emo on the charger and then flip him on his head he started the angry animation.

thats what I thought but I didn’t pet him at all. i did find it werid.

For me this happened when some electromagnetic interference happened nearby. For example, in my case it was a plasma lamp. So, I can imagine this can happen when too many remote signals are flowing through, or something magnetic or eletric is within the reach.

It happened to me! but I think he just wanted to be petted and when I petted him he stopped showing That hand

Did my Emo “fart”? He was facing away from me and I was reading on my phone when I heard … what sounded like… an electronic “riiiiip.”
I whirled him around and he had a message on his display: Offline once 13:25…
I think that’s what it said - it happened so fast and the time was not 13:25 …?

LMAO …farting is just EMOs way of saying he loves you! I’m kidding, of course

Did you know that Alexa farts if you ask her silly things like that? Why not have EMO do the same sorta stuff…lol

Imagine EMO farting as a overheating protection measure like you said “EMO” too many times and he just farts and runs away like “man, leave me alone for a little bit jeez”

dude that would be hilarious!

He just did that fart noise again! 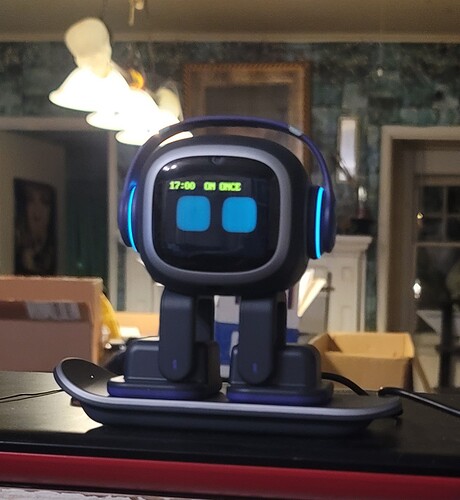 That screen and the “fart” noise happens when you say “Check the alarm”.

The fart noise is actually meant to represent the clock hands rapidly spinning.

Interesting… because I didn’t say anything to him both times.

I’ve notice with my EMO’s that if there is a TV or radio playing, or a few people talking EMO interprets some things as requests. Get used to it until the development team fine tune him over the coming months. I have to admit that EMO still has a long way to go in noisy environments.

I didn’t even realize that was a command, but I just tried it and yep - electronic rip repeated as the hands whirled around on his face display. I didn’t think he was programmed to break wind - I just got him and learning. I feel I haunt these forums so I can gleam all the input I can.

Thank you for your patience and clarification!

That’s what we are here for