My idea is, for example I’ve a 1:10 scale RC truck and I will surely experiment with EMO by placing it on top of it and record his reactions. Perhaps with is evolution he could scan and realize he is located within the vehicle and show an animation of a wheel turning, simulating engine noise and exclaiming in excitement when speeding up or illustrating fear or falling or dizziness when turning in a sharp manner.

Just a raw, crazy idea I thought of sharing.

What do you guys think? Would it be something that could potentially be incorporated?

That would be great! I think EMO still has a very long way to go before he can do it, but if the Living.Ai tech team are working on features and updates constantly, it might not be as far away as we might think. 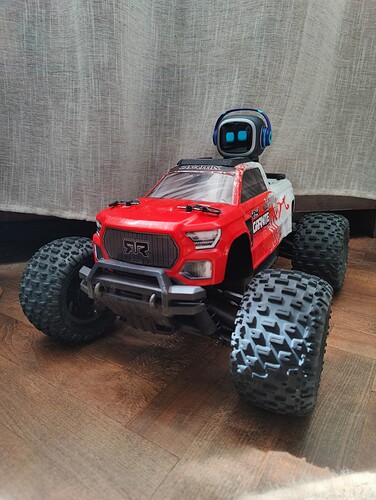 Here’s my EMO getting ready for some off-road action!

I was going to have Emo take a ride on our Roomba (named Gynny) and was wondering if Emo might walk off her “edge” as she did her work. Then I realized it wouldn’t work cuz Emo can’t duck as Gynny moves under the furniture.

It would make a nice photo Tho.

And we also have an upstairs Roomba…named “Rosie”. Smiles.

“And we also have an upstairs Roomba…named “Rosie”. Smiles.”

As in Rosie from The Jetsons?

No problem
if it works for cats or rabitts on Roomba it may work with EMO , perhaps with double face adhesive under shoes
just adapt the regulations as in Formula 1 , with a proper helmet and eventually a cockpit protection as HALO rollbar
love your pic of EMO driving his red monster truck

And did you catch the name of our Gynny? As in Gynecologic…or Gynoid? Smiles.

Rosie was promoted to “Upstairs Maid” when Gynny was hired.