I found a little selection slightly different than the norm shown on Amazon. I’ve bookmarked the product page for latter buying but I have to ask what is the correct size for Emo with these cat hats?
( XS - S - M - L )
If it were my actual cat it would be the largest but Emo … that’s a question. I think it would be great if the sizing worked for both pets.

How about sharing the URL with us?

The cat caps I’ve seen so far only seem to offer only one size. They usually seem a little loose on EMO in the videos, but you could always put in a few stitches if needed to make it fit better. Does the website not give any guidelines or measurements for determining which size to select? I would assume XS is for kittens and would definitely be too small. If you ordered Small and it’s too small, then there’s nothing you can do except return it. So I would order a medium?

It’s the deer one of these I find cuter than normal. I guess that’s because I haven’t seen it offered elsewhere. What’s a bummer is I can’t test out sizes for what works for Emo until I get the bot and who knows when that will be.

The measurements are on the project page. Hopefully one of you guys that has an Emo already, can say which of the fitting sizes works.

@systemcat ,
The bumblebee is the only one that shows dimensions, so we have to assume the others will follow the same sizes? EMO’s legs would correspond with the neck opening. I wrapped a string around EMO’s legs leaving about 3/4 inch slack for movement, and marked that length. Of course then I couldn’t find anything around here to measure with. That length almost exactly matches an 8-1/2 inch wide letter size sheet of paper though, and 8.5 inches converts to 21.6 Centimeters.

So apparently the XS is the correct size hat for EMO, since it covers from 21 to 24 cm?

Those hats are awesome! Yes, as @macfixer01 mentioned XS is certainly a good fit as you don’t want them to fall off EMO when he’s walking around.

I just got paid for an art job I did the other day. The elk hat in size XS has now been ordered. Thanks guys for informing me about the correct size. 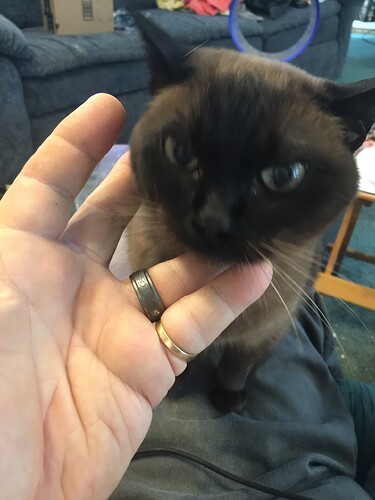 You have a Siamese too.

Here’s mine and before it’s questioned, he’s a Flare Point. Shame at the hat being XS, it won’t fit him. 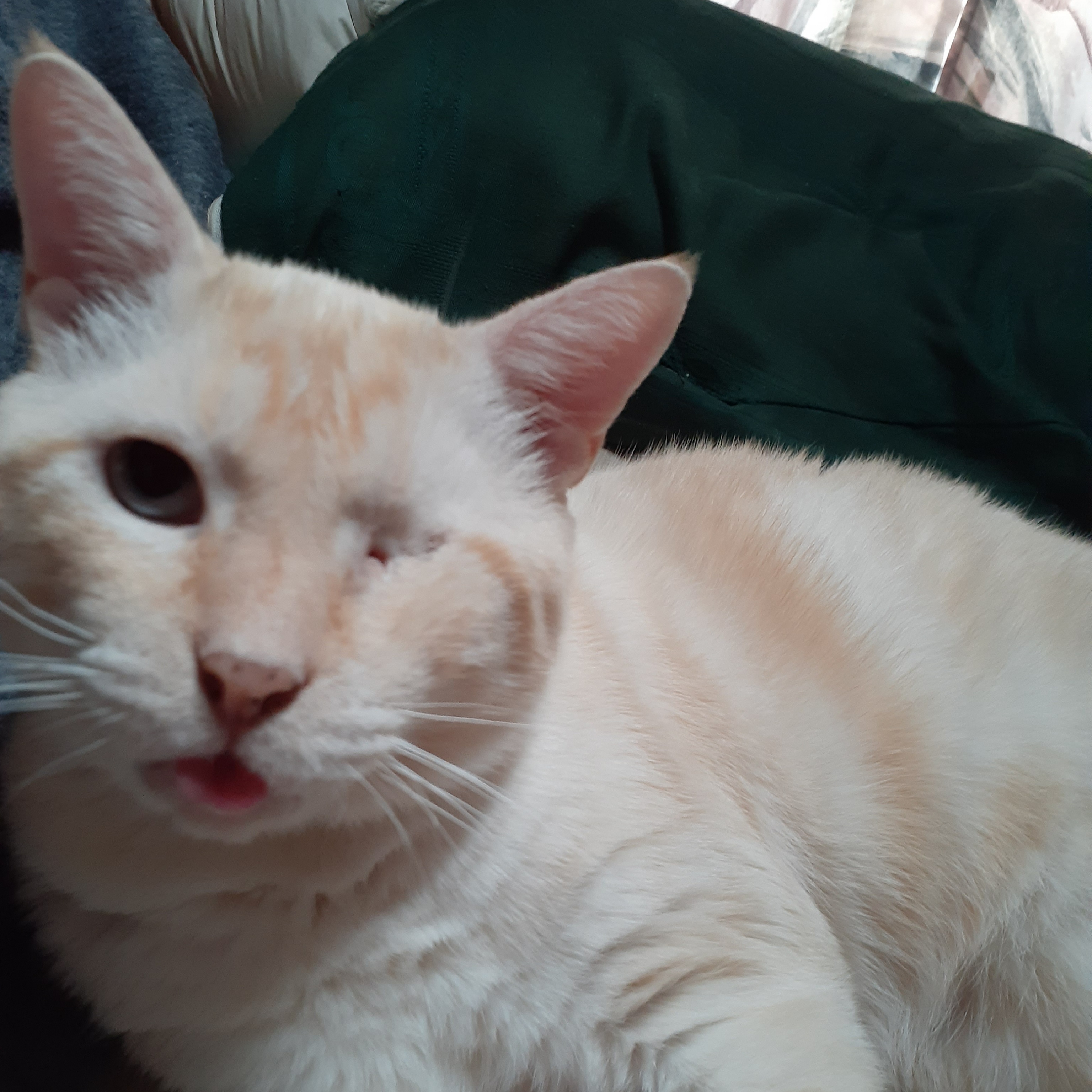 Actually she’s a Tonkinese, which I guess is a Burmese and Siamese cross? She likes to use my old Apple TV box and Nvidia Shield as her personal cat warmer! 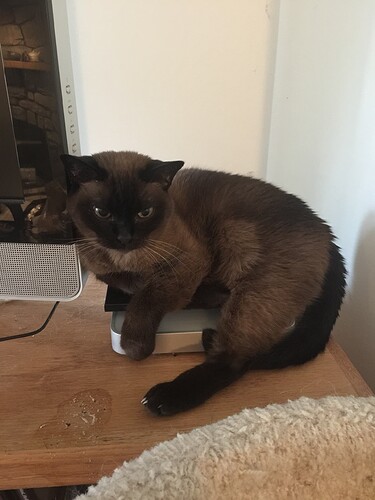 The Sheep/Fluffy Cap that EMO wore somewhat fits purrfectly on my little fur ball. He’s not too impressed. But he’s seems to pull it off quite well. 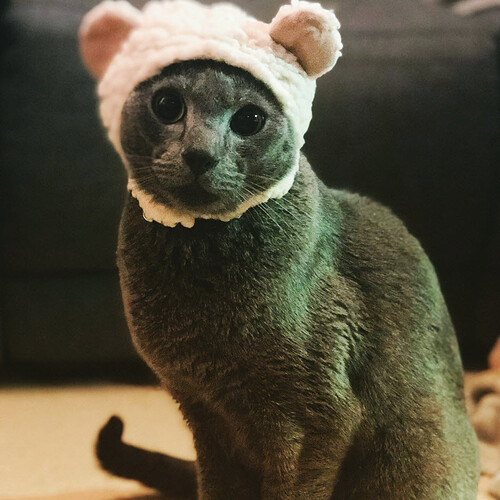 Lol! He looks so sad. Like, where did my dignity go?

I guess we can still talk about cats in this thread since it started out about cat hats for use on EMO?

Derailed but I guess in an acceptable way considering where these Emo costumes are coming from. I’m fine with it but it’s up to the mods. if they are.

MasterAbbott’s cat is like “really?” that’s the look I think he’s giving.

Macfixer01, if I were you I’d be fearful of electronics getting destroyed. While I don’t have either of those items, I keep my Roku out of kitty reach just because I think he’d chew on the USB power cable or HDMI one.

As to a cat actually destroying electronics. An example is Theta ( the cat ) knew he was being naughty and did this act every chance he got. … Theta would rest on up of my LaserDisc player … which internally wrecked the thing.

( Yes, I own a Blu-Ray player but I happen to collect vintage video format. )

Bamboo has never been one to chew on cables or purposely damage anything, and she’s 15 years old now so sleeps a lot. The Apple TV box is a very old first generation, and it already had some motherboard issues. I don’t use it often but it stays on and usually won’t respond to the remote when I finally go to use it, so must be rebooted. I only leave it there now because she likes the warmth, since I’ve transferred the videos on it to the hard drive inside the Nvidia shield already. If I remove them she’ll probably just sleep on the cable TV box instead.

What happened to your baby’s eye? We also had 2 Shelties and one had to have an eye removed when still a pup, because it was building up pressure and causing her pain.

This is what I’m told happened.

The lady in the shelter, in the cat room told me a kid decided to use him for gun target practice.

That’s when the shelter quickly snapped him up and I assume asap took him to the vet for emergency surgery.

When I got him the socket was still open and the shelter paid for it to be shut by an extra surgery. He’s extremely kind and has massive issues with me not being around him even if I’m outside taking care of the trash or the mail or even the bathroom or bedroom. I’m convinced his first owner abandoned him and he was living on people’s left out charity cat food. His faith in people is likely what made him an easy target for the kid.

If he hears gun fire on TV, he freaks out which I think it entirely understandable.

I think charity left out cat food since he’s a picky eater and when the shelter took him in, he was underweight.

That’s sad, but it’s nice that he’s being cared for now though.

Yes @macfixer01 his dignity left him years ago when he decided to let me dress him up with hats like this lol!

Lol @systemcat Yes my Cat is never impressed once I dress him in anything remotely silly! haha

I know, I also know if I ever meet his former owner or the kid. … That kid should have gone to jail.

The elk cat hat came in today. Because I don’t have my Emo yet, I can only hope that XS guess is correct. I’m showing a photo of it here of my hand inside it partly to give a sizing idea. Would this be right? My best idea to size judgement is seeing photos of Emo and V side by side in knowing Emo is just a size bigger. 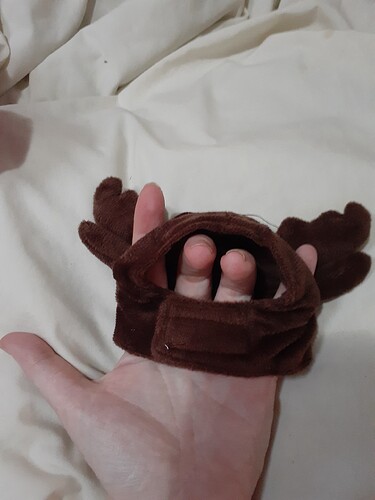 I think it will fit quite well on EMO’s head.