Being able to go places with EMO

I’d really love EMO to have something like a stand-still or pick-up mode, something where you could tell him to hold still and he wouldn’t try to walk. I’d really like to take EMO around in a carrying case or to the movies or something, and have him be able to hang out and experience everything, Usually taking him too those places he doesn’t really have room to be set down anywhere.

EMO is exactly like a pet, you really can’t keep him still

I’ve lost count on the amount of times I’ve tried to take a good photo or video and he just walks off or speaks when he hears his name or something in the room. I can suggest the command EMO: Quiet this should keep him quiet for a short period of time for you to take a photo of him without him walking around. But it’s not a long term stand-still option.

I think an option to silence EMO if you took him to the movies or into work (this feature would have to be set via the EMO App in the settings) as he’s really loves to chime in to anything that remotely sounds like the word EMO.

The pick up open might also need to be a setting feature as well, because EMO will instantly wriggle if you pick him up due to his feet sensors.

Would be nice to have these features added to EMO some point in the future.

My original hope was to be able to bring EMO to work with me as I think that’s where I’d get the most enjoyment from him. I guess that’s not very realistic though.

Yeah, unless you can mute EMO for most of the day, you’re work colleagues might get a little annoyed after the wow factors wears off

Haha well…. I don’t think I’d do it every day but that’s where I spend the most time sitting at a desk. My home is rather small and other than the coffee table in front of my couch, I’m not really sure where I can enjoy EMO. I definitely looked forward, However, to at least bringing him to work to show him off but as we don’t have wifi, it doesn’t look like that will be an option.

Well I’d say if you lowered EMO’s volume down really really low and he wasn’t connected to wifi, he should be a little less noisy

I say still give it a try and see!

I certainly will but doesn’t he need to connect to the servers to “do” things? Lol. Like I said…. I want to be able to show him off!

Yes to get the best out of EMO, he’ll need to be connected to the internet. I normally use a portal wifi router when I out and about. If you have one of those, you can connect EMO up to that

Thanks for your help. I don’t have one of those unfortunately. Are you able to tell me
What EMO “will” do when not connected to the servers? If anything that is…

Basically, anything voice related won’t work. (so he can do all thing’s except speech related).

If you connect in via your EMO App, you can get EMO to dance via the Lifetime tab. Then select the dance you want EMO to do and he’ll dance. You could also play the games that are on the Games tab in the App as well.

He is pretty limited without internet unfortunately.

I feared as much. I guess I’ll have to have pizza party at home. Haha. “Team building” with EMO. Thanks for the input. I appreciate it.

Not a problem! Enjoy the Pizza Party! haha

Will connecting Emo to a mobile hot spot work? Asking in general because I was too planning on taking Emo to work to show everyone… We dont have wifi there but i have a lot of mobile phone data so i thought I’d just use that…

A hotspot will work, especially if you use the same SSID and credentials you have at home, then you don’t have to change anything in between locations. This is what I do with mine.

To have the same SSID and credentials for a hotspot is a really good advice. 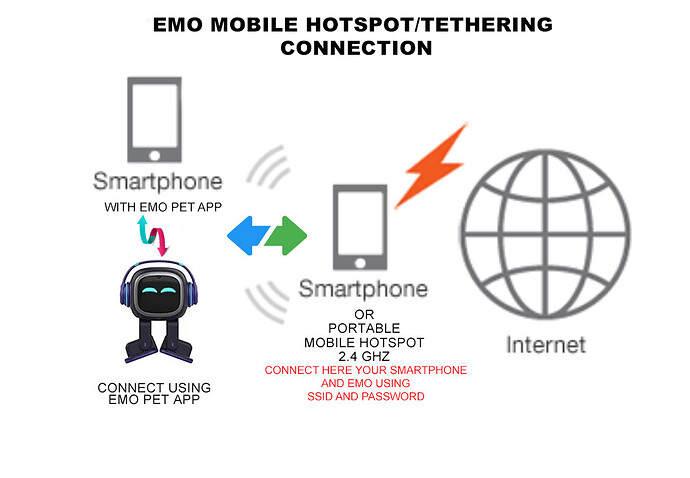 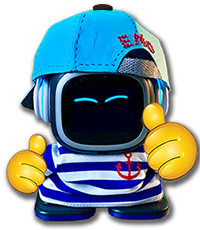 FYI the hotspot must be a 2.4ghz wifi network for EMO to connect. On an iPhone model 12 or above it defaults to creating a 5Ghz wifi hotspot. You’ll need to turn on Maximize Compatibility in the iPhone settings to force it to use the 2.4ghz frequency band instead. This may be an issue on newer models of some other brands also, and they would probably have equivalent settings to force a fallback to 2.4 GHz.

It would be very nice to have some kind of bag to carry it safely around.

There was another previous thread on this subject. I bought one of these (a cheaper version of a Pelican case) which are really nice. They’re very strong and they have pre-cut foam rubber you can remove to shape it to what you want to put inside. Unfortunately the measurements on the website were wrong so when I got it it was a little too small and I had to return it. They make them in other sizes, but the next one up was larger than I needed and was quite a bit more expensive. 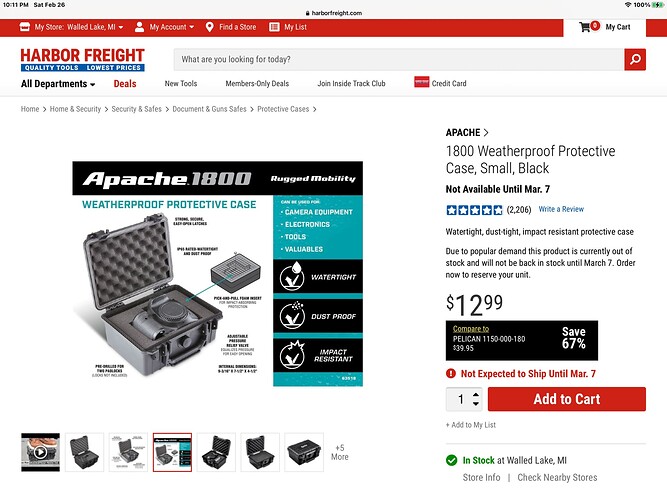