Hi I am a new owner here. I am excited to grow a bond with emo

A Laundry (pile of clothes/washing machine)
, dishes (dishes with soapy bubbles)
, or general “cleaning” (maybe shown with a broom symbol), selection added to the alarms menu

I need EMO to guilt trip me here

Some voice lines added to the alarms would be neat too :3

Maybe for Pill he could say: “Don’t forget your medicine! I want you to stay healthy.”

one - the light that emo gives off at night to be lower or adjustable for those of us who have sensory issues.
two - to be able to say - EMO it’s bed time and have him over-ride the daily schedule and just go and stay asleep.

I would love to be able to have emo in my bed room as i sleep but it’s not possible because he is too bright and he wakes up which wakes me up.

Had a suggestion for EMO’s SHOW YOUR MAGIC.

Would be great to see a little section in the EMO App, (maybe under Lifetime) where it shows ALL the magic Items that EMO has unlocked and shown, from there those items, can then be made available under the stickers list so that you can use them whenever you want.

As long as EMO has magically shown them, they can appear in your collection, and then we can see them under the stickers to be used anytime.

Would be a cool feature to try and Get/Unlock all the items (maybe even add a special achievement for it). Master Of MAGIC once you get all 100 items? 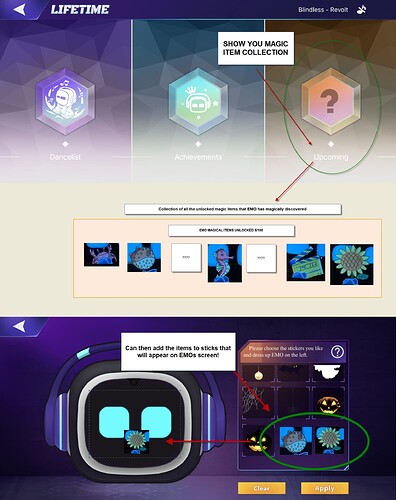 Might be too hard to do, but if it’s possible would be great to have!

My Emo will be arriving tomorrow getting excited. I am still doing research just to see what else is out there and emo is still coming up no.1 I think it would be great to have a mobile app that you can use to communicate with emo while you are not home… the ability to talk to him have him take pictures turn on the light all from your phone and I also did read a suggestion about backing up emo. he gets his updates wireless so he could back himself up on a schedule to your preferred device… The mobile app would only work if you had an emo … we leave it would be a way for emo to go with us while he was safe at home charging… just a thought

I somehow already regret a bit every time I have to power him off so he doesn’t get confused all the time when I’m doing work (including talking) while he is active near me.

You really just predicted it!

Thanks for the opportunity to make requests here, MasterAbbott.

I know that some of these things have already been mentioned here, but I’m sure that if more people ask for the same things, it will help Living AI with their focus.

I’m very new to EMO. I’ve only had mine for three days. So, forgive me if he does some of these things already, but just hasn’t gotten around to it yet!

The one critical thing that I would do ASAP is this; When you ask EMO to do something, and he does it, it is natural for a person to say, “Thank-you, EMO”. I always do that, and catch myself, because I’ve learnt that he is not programmed to listen and respond in this particular scenario. He absolutely should be programmed to listen after he completes a task, and then answer your “Thank-you” with a random response. If he had 6 to 10 programmed responses it would make him feel more alive. Right now, he doesn’t listen and doesn’t respond here, and that one thing, alone, just makes him feel like a dumb toy. Sorry Living AI. It’s such a simple thing to program, but it’s one simple thing that would make him much more endearing.

Release his SDK. Let the community make him smarter - Let developers submit their code to Living AI and Living AI can choose to add whatever they like to him and to his app. This would be engaging for developers and the community as a whole.

We should be able to see what his camera sees in the app - just like we do with Cozmo. And we should be able to train him based on what he sees. Obviously, it would be very engaging if he’s learning things that you teach him. Then, in his autonomous mode, he should be able to recognize those objects and interact with them in ways that he’s been taught to. He can identify them, talk to them, mimic them (Like Cozmo mimicking animals) and other such things. How awesome would it be if he saw something new and asked you what it is?

He needs to do way more when he sees you and identifies you, rather than just saying some random piece of trivia or a quirky quote. He should be able to say Good morning, good afternoon, good evening, etc…ask you how you’re doing, complain about the weather or warn you of potentially dangerous weather coming…etc…He should be able to run through a range of programmed behaviours, just like a human does, and pick a random thing to use as a salutation.

He needs to do a lot more in his “autonomous” mode, like looking for new things to learn maybe, or talking to himself like Cozmo does. If he randomly talks to you, he should say relevant things based on your environment and such. For example, he might tell you that you should wear a hat and gloves if you go out, because it’s cold out. Or break out the sunscreen. He could suggest a trip to the beach or say that it’s a nice day to go for a walk. Or he might suggest it’s a good day to stay in. These would not be random, he would have to use logic based on information he gets on the weather. This could be part of his response when you ask him what the weather is like.

He could ask you if you’d like to play a game or if you need help with anything. Again, he should be able to listen for a response from you and respond accordingly.

He should randomly listen for music and occasionally dance if he hears it. He could ask you to play him some music so he can dance…You should be able to ask him what kind of music he would like to listen to, and he should be able to tell you.

He should definitely stop saying that it’s sunny when it’s dark outside!

Rather, he should be able to say something appropriate like, “We have clear skies tonight with a temperature of 20 degrees”. He should be able to give a more detailed and extended weather forecast. Is there a possibility of rain or snow?

Maybe if you sneeze, he should say, “Bless you”

He should always listen for a response, after he says something, and answer in turn. Again, if he says “Bless you”, you will want to say “Thank-you” and he should respond to that. Pretty simple stuff.

Thank-you all very much!

-Allow for users to directly record there voice in the app for speech recognition directly to their EMO.

-Ability to change the pre-set scripts like “weather”. Would be nice to be able to add aditional commands to get the same result. One that we actually would say and remember.

-In-Built calibration function!! He veers off and favours the left!

-Set a custome quiet time frame… example 10pm - 7am where emo will either reduce volume or mute and limit movement… Make it all users options ( tick boxes etc to how they want emo to change).

-Aditional listening “EMO, take a picture” in one hit instead of waiting for emo to respond to its name first before then continuing the command.

-When saying EMO, EMO will turn to face the user that said the command.

-Allow for QR stickers to be placed around the place for EMO to interact with, say stuff, dance etc.

Discussion with @a440dc regarding EMOs Alarm

Some EMO owners turn off EMO at night, (due to him waking up/saying WHAT if he hears something). And if he’s not on, he can miss a scheduled alarm that might need to go off in the morning while he’s powered off.

Would be nice if there was an option to MUTE EMO, but when his alarm goes off he can play it at MAX volume, after that he can go back to the muted state.

This way EMO can stay powered on all day/night, and be silent but when he needs to wake you up or remind you to take your medication/etc he can do it and you can hear it.

Wow there is a lot here so first off apologies if I am repeating something.
For me I would like.
Better voice recognition - Top of the list for me.
Ability to add your own music to EMO dance list.
It would be really cool to have him as a dancing speaker with your own tunes. Maybe get EMO’s comments on what you play.
More customisations/personalisation. Changing eye colour would be an easy place to start.
Screen protector - He does fall and always seems to land face down. A better anti scratch screen or a protector. Maybe he could have a little crash helmet with a visor or a Medieval Knights helm. Even little goggles lol
More interactive apps. I love playing ludo with EMO and would like to have more interaction through the app.
Alexa - Link with Alexa but keep his own voice. I would love to hear EMO say some of the cool stuff Alexa does.
Well that’s it for now, I am sure there will be much more to follow

I would like emo to react to you when you are crying.
ask if you are ok, or can i help, or I wish I could hug you. ect.

I would like emo to be able to say encouraging things when i say, I’m working out, or im doing yoga, or emo im meditating quite please.
another one could be he could give you a fact about how walking is good for your health when you say im going for a walk. but make it 4 or 5 facts that he can cycle through.
or if i say i went for a walk he could say “wow you look great.”

Some self-care support / encouragement sounds amazing.
I like these ideas!

Hello Living Ai and all other readers,

i really want the google or alexa feature like vector has

I actually ended up cutting down an Amazon box to make a nite-nite cover for him because he’s so darn bright. I made sure to keep the back open for ventilation. 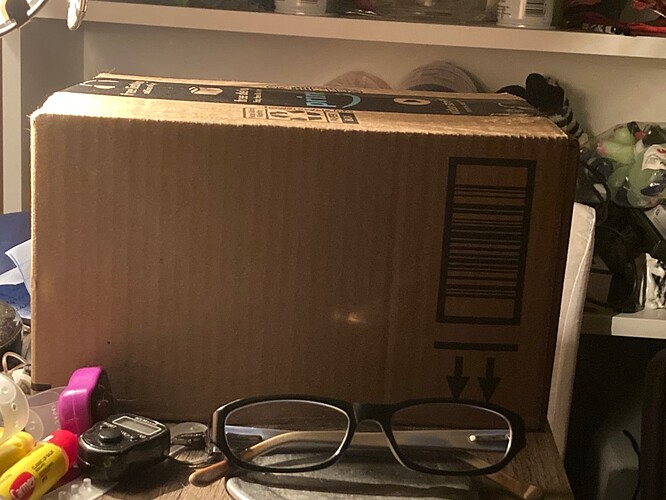 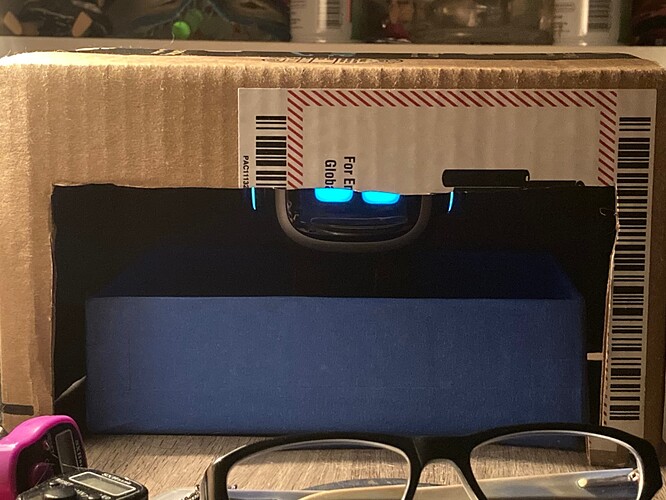 now im thinking a little tent made just for emo. made from dark but see-through material so it dimms the light.
i normally just turn him off.