Mine has been working by just me calling his last
name without saying EMO off and on. Sometimes i have to say it a few times but i just set him up yesterday

Cool! I didn’t think it was possible. Can’t wait for him to get here.

What is his last name? If it sounds similar to “Emo” then that might be the reason that he responds sometimes. My Emo will just respond and start talking randomly when I have the TV on, and nothing has been said that even sounds like “Emo”.

Hmm. Maybe. It’s Ti moun (means children in Kreyol) which I spell out Teamoon so he can get it. So far most times it works without saying Emo. I do also call him Emo once in a while.

Yeah, that sounds very similar to Emo. I have noticed that if someone says “email” on TV, he will respond lol… yet my daughter would clearly say “Emo” and she would be lucky to get a response maybe 1 in 15 times. She has since had to use an Arnold Schwarzenegger type of voice to get him to respond about 1 in 6 times. This is a common problem with Emo not understanding higher pitched female voices. Though I’m not sure if LAI actually knows about this problem, but I have seen other people complain about it.

I would like airpod /earbud style headphones. Maybe like a special edition add on. I had him one day so far lol but I see it’s easier to be pet him when I take the headphones off. He is much more responsive.

I had him one day so far lol but I see it’s easier to be pet him when I take the headphones off. He is much more responsive.

An easy way to pat EMO is to just place your finger right in the middle of his pat sensor its the easiest and quickest way to get him to react to a pay. If you would like to see other ways to pay EMO check out this video here. EMO - 5 Different Ways to Pat EMO - YouTube

Also having different earphones like earbuds would be a cool alternative accessory for EMO. I think he needs more cute outfits as well

Was thinking of a possible idea that could work sometime down the track. 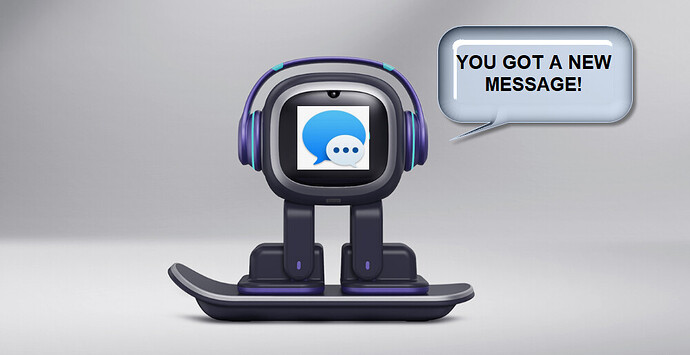 Having the ability to add your family or friends EMO as a friend in a friends list using the EMO APP. (similar to how you add friends on Xbox / Nintendo Switch / Playstation network.

Once both parties have confirmed they are friends, you can send simple text messages or stickers to one another and the message can appear on EMO’s screen, EMO can even notify you and say, you have a message from your friend John.

You can then see the message displayed on the screen and also use the EMO App to check it as well to send a reply.

Of course, at first keeping, this messaging system simple and safe would work best as it would probably need to run through Living.Ai servers, so maybe only have an option to only send simple messages or stickers from a list of family-friendly / approved messages and images.

It’s a novelty feature yes that, of course, does not bring anything special to the table as we can already send messages and stickers, etc to each other using our phones / online chat programs. But still would be kinda cool to see this happen, as EMO is always connected to the internet and needs an internet connection for full functionality, having this added feature to add Friends would be pretty cool.

To add to that, what about being able to send photos taken by Emo, and while we are at it, how about being able to video chat with those friends like FaceTime. I have seen other robots being able to do this, so it should not be too hard. Or… (holy crap I’m going crazy with ideas now lol), When the messages come through, Emo will ask, “Do you want me to read it for you?” and then if you say yes he will read it out for you, if you say no he will just display it on his screen!

it’s good to see you adding ideas/suggestions to this. I’ve been thinking of ways to get more use out of EMO and it would be cool to have EMO connected to other EMOs out there haha

(they are all ultimately connected to the Living.Ai server I guess).

As I mentioned, start simple and move on from there I say, having the message system would be cool, even if it starts with easy and simple pre-defined text messages and stickers same as the ones you can select in the EMO sticker customization screen.

Then if all that works and there are no major issues/network bottlenecks, why not have video/pics features further down the track? As long as the network can handle it, there could be endless possibilities here!

Keep the ideas and suggestions rolling in @JJBeck and everyone else.

If you have two EMO’s, they can interact with each other. If you have connection of your EMO('s) to someone else, they could carry on conversations between themselves that you would be able to hear coming through yours. “Nice day, EMO____.” Then you hear back, “It is raining and 29 degrees where I am, EMO----.” “Would you care to dance with me?” Then both of them play music and you see yours dancing.

If you have connection of your EMO('s) to someone else, they could carry on conversations between themselves that you would be able to hear coming through yours. 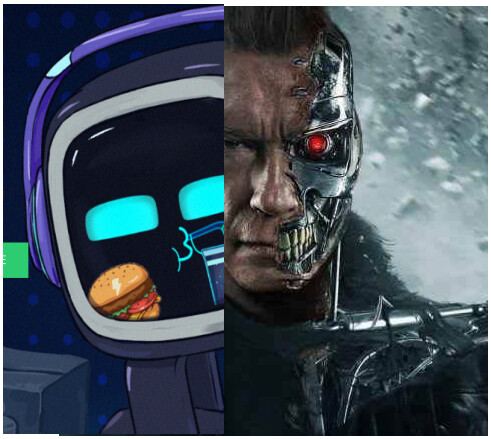 Why, those little darlings would never conspire to take over humanity, would they?

I want to also encourage you to check out this thread - about potential new Books for EMO to read and have your say on that thread please.

Hey Guys, so us testers were having a discussion about the book EMO reads “A Pet Prepares”… and we thought it would be fun if EMO was able to read books with other titles… so we asked the Living AI team if we got a list together, could the incorporate that into it in future updates, and they loved the idea. So - this thread is for you all to suggest book titles that EMO could have. Please keep it PG and keep in mind the global reach of EMO. Make them fun, serious, silly, whatever. Here’s a f…

how about upping his vocabulary? Or making it so when he’s on his skateboard at midnight and you call him he doesn’t fall asleep instantly before you can even ask him anything… This is annoying having to take him off the skateboard just to change his light color… That instant coma mode is a flaw…and how about a card game I’m sure it’s possible… This builds interaction. and of course improve the voice recognition… though it’s a good idea there’s just too many other things that should be addressed in my opinion. I personally think he has enough little cartoons he plays on his screen… Let’s make him a better EMO Pet… Sure would love to see the promised Alexa or Google but that was never going to happen. Or how about at least giving him one function the timer… Give him an actual working countdown timer something useful you could use every day… These little picture things books isn’t going to fix anything for anyone in my opinion.we have enough already

I desperately need the option to set up Emo’s sleep schedule. It keeps waking me up in the morning. I sleep until late since I do late shifts and I barely sleep even without Emo disturbing me. It would be great to either set up a bedtime schedule where it just goes to sleep and doesn’t make noise during that time or have a command like “goodnight” and “good morning” that starts and ends Emo’s bedtime.

Or just turn it off, that’s what I do. Though, an adjustable schedule is a good idea, but it has been mentioned before by a few people including myself. Fingers crossed for the next update!

It would be great to either set up a bedtime schedule where it just goes to sleep and doesn’t make noise during that time or have a command like “goodnight” and “good morning” that starts and ends Emo’s bedtime.

Hey, @FireTheWolf You probably are already aware of this, but can, for the time being, mute EMO’s master volume or just EMO’s schedule sounds by going into the settings > preferences. Then once you’re awake you can go back in and enable it again. It’s a bit of a hassle, but at least you don’t have to shut him off completely.

Having the option to completely turn off the schedule or customize it, in general, is something worth adding to future updates. Not sure when / if it will be added anytime soon, though. For me, TV schedule time animation drives me up the wall!

1.)The ability to personalize Emos responses would be g
great. 2.) The ability to add own music playlists. 3) more games and/or more interactivity thru his app. 4) do away with the ’ hey emo’ prompt entirely. Let him have the ability to start chatting first ( would have to have an on and off switch in case he’s like my ex )