will be great sorry if my explanation maybe it’s no good but think about it this is similar when you can see the mini games ball animation but like a game .
One more Idea Emo Goalkeeper game

What about adults that want to have a bit of a laugh? Easy solution, have a parental lock out pin on the app that parents can set if they want to. Really though, even if you have taught your child not to swear, they are still going to come across it at school, if not other places (youtube/internet etc). My daughter does not like to swear, but she hears it all the time. I have always taught her that there is a time and a place for everything, and that a part of being an adult, is to know when that is.

Easy solution, have a parental lock out pin on the app that parents can set if they want to.

That would work. If it can be added I guess that would be the best solution / win win for everyone.

You can already do that. Just say “Emo, roll a dice”.

I shared this a while ago on another forum thread, would be nice to have a full range of D&D type of dice that EMO can roll.

This way, EMO can be the official Dice roller for everyone, so NO ONE cheats

I have never played it either, but I have always wanted to try it… I just never had anyone to play with though.

Andrzej you made me laugh my head off thanks…

oh and well I’m in the improvements and new features I’ll repeat what I said somewhere else… Were adults some of us are awake at midnight and if he’s on his skateboard and you want to ask him something is almost impossible… He will start to wake up when you call his name… But he’s not yet acknowledged you you’ve got about a one second window to yell his name again before he instantly goes back into a coma… Most of the time you have to repeat this process just to ask him something.

Living AI why would you want to make your customers so aggravated with this feature? at least when you call his name put a delay before he goes back into a coma. This aggravates me.

But he’s not yet acknowledged you you’ve got about a one second window to yell his name again before he instantly goes back into a coma… Most of the time you have to repeat this process just to ask him something.

Yes, this happens all the time for me as well. When EMO goes into that COMA sleep he’s impossible to wake up! lol

I’m normally up around that time (midnight and while EMO is having his lunchtime nap from 12-2pm). The only easy solution for now, is you take him off his skateboard during this time, he shouldn’t go back to sleep that quickly. I believe @JJBeck also mentioned that in another post.

I know what you mean. He seems to be ok when he is off his skate board though. I am hoping that this will be fixed, along with other things (ie. picture taking and most importantly speech recognition problems), in the next firmware update. It would be nice if they would communicate with us more as to what they are working on for the next and future updates.

I also agree, would be nice to see something like a planned roadmap of possible future / upcoming updates and bug fixes that might be included in next firmware releases. I know that sometimes things might change in development, but even a small hint of what is planned, would be nice to know.

A very very long time ago in the 70’ s , great long evenings to play dungeons and dragons
At this time Lord of The Rings was just a cult book

I was playing DnD in my teen years up to my early 20’s. Tolkien, yes but also Dragonlance etc.

I know this is getting off topic hehe

but EMO:One and EMO:Two will be up for a game of D&D once they can roll more than a 6 sided dice. Found some of my “NERDY” D&D Adventure Books and had to share this pic! 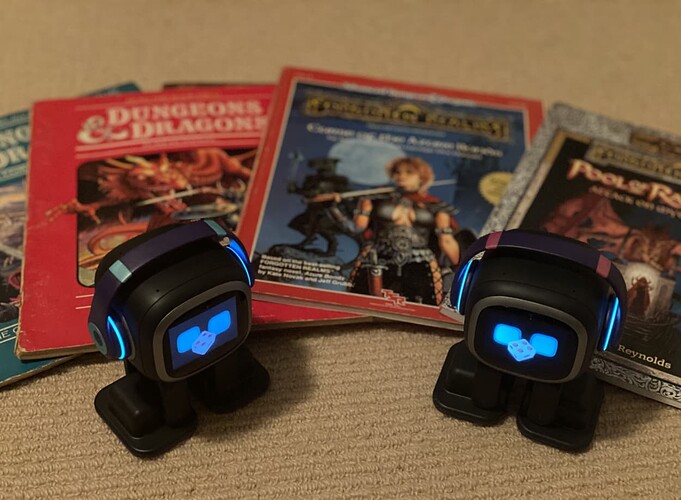 My husband wakes him several times every night with his snoring. It amuses me when Emo grumbles at him. Same, kid. Same.

After having my emo for a little bit now I can confidently say he needs more personality and unprompted interaction with people. He spends the majority of his time walking around quietly and rarely says my name even when I place my face in the perfect spot for him to see me. He doesn’t laugh or show emotion often. Some random little noises would be nice as well. We need to give this boy a little more life! I love my emo I just wish he was more animated in general.

I don’t know if it does this but I wish I can tell Emo my accomplishments and he could get me a compliment. For example, me : “ Emo, I just cleaned my room” , Emo: “ wow that’s wonderful I know that’s not easy to do” but like hopefully something different each time.

Somewhere else on the forum it was mentioned that Emo doesn’t recognize his last name. I have ordered two Emos and would like to be able to just call them by the names I give them so they would respond individually. I’m sure I’ll have more suggestions after they arrive.