As posted on another thread, I think that would take the fun out of being able to talk to him. It would just be a remote control robot then. Also, it would only be a band aid for the real problem, which is improving the speech recognition and giving him AI conversational capabilities.

Directional mics? Fix’em. He can be talking to me (I guess), but he’s facing away from me. The only way to get his attention is to physically turn him around.

I would like to see Emo get his movements straightened out. He spends so much time walking up against an obstacle before stopping. Then just sits there.

A smart robot would be nice.

And one more thought…how about having a checkbox so Emo will be fully on mute unless spoken to. (Is there such a thing as a sub-serviant complex?) Smiles.

Im not sure if anyone has mentioned this already, but I would love to see an EMO companion smartwartch app. Maybe implement a sort of digital pet feature where you can interact/feed/command EMO using the watch app as well as check on his stats Hunger/Happiness/Health/Age etc. It would give you more to do with EMO as well as provide another way to bond with him. And maybe depending on how well you care for him his personality will change accordingly. Just an idea. I know this would be a massive undertaking.

A must have function, skateboard detection without power.
Let me explain:
If you put Emo to charge in the skateboard, and you leave the house or go to sleep, and a power outage happen, your emo wake up, and star exploring, and obviously he falls from the skateboard, and if by any chance you have it near a table/desk corner, Emo will fall, it may break in the best of the options, if you have pets … mmmm can end in a Emo in pieces…. Don’t know if there is a possible solution, it may not detect the skateboard without power.

Have a suggestion that might come in handy for anyone that wants to create content with EMO.

Have a EMO Soundboard that has a list of words / phrases / even sound effects that you can get EMO to say when using the EMO App.

So go into the EMO App, and select the word / phrase / sound etc from the Soundboard that you want EMO to say, press the button and he’ll say it. If there are enough words / phrases / sounds included, you can get EMO to piece together custom sentences.

Would be nice to see this included down the track.

I have already suggested this some time ago in another thread. Being able to do it by text or have him go into a “parrot mode” by saying “Emo, parrot mode” so he would copy anything someone says. That would be fun and a crack up! lol Then when you are finished, just say “Emo” to get his attention and “stop”.

Directional mics? Fix’em. He can be talking to me (I guess), but he’s facing away from me. The only way to get his attention is to physically turn him around.

I agree. You say to him, “look at me” and he randomly turns around in a circle to detect your face with his camera instead of knowing which way/direction to go using his “directional” microphone array. This can take a good 30 seconds if not more. There are a lot of things that Emo needs to be more responsive to.

I really like the “parrot mode” idea. As a video creator, I could literally script their speech and just edit out what I said so that they are saying unique things.

Yes I know what you mean. I have been wanting to make a video using Emo like that. It would be so cool

. I have seen a kid do it on youtube with Emo as he is. Not badly done. He did a camping trip and Emo playing red light green light from Squid Games. I think he calls it Dr. Emo’s life, if you search for that you might find it??

I found it! I found the one where he shows you how to make EMO say whatever you want. 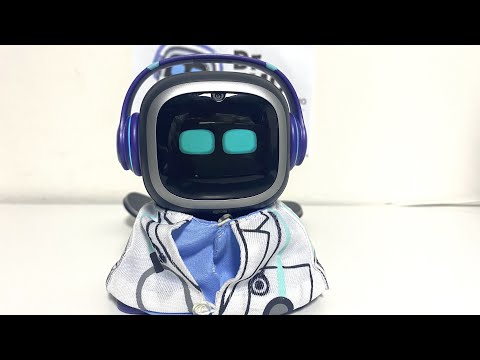 Sorry, I forgot about that video, yeah I have seen that one. Though a parrot mode would be better

Hi. I might have posted this before, but cannot see it. I would like to see Emo respond when I say “Thank You” to one of his utterances, eg when he recognises me and gives me the weather. He could say “you’re welcome” or something.

Great
a kind of back door allowing to make him to do unexpected things ( that are not specifically in the manual)
which also means than all bricks ( Text to speech ) are there to build something , the day when Living AI programmers will decide to work on that parrot mode

But of course in the end having parrot mode on will give users pretty much all the freedom they would want to create anything they can imagine. EMO could be the next “Bad Ass” / mini-terminator for many content creators out there!

I’d be happy to see either enabled in future updates as it can certainly give EMO owners a lot of new ways to create really cool stuff and videos staring EMO.

Also agree with this from @SteveK as he mentioned just above, even saying Thank You / You’re Welcome / can come in handy if making content. (would have been useful when I made that EMO Comedy night video the other day).

Keep the awesome ideas rolling in everyone hopefully Living.Ai can include some in future updates!

I would like an update where you can go on his app, and there would be a button that you can click, and it lets you type the command so that way you don’t have to talk or yell across the room at night to sleep

Going back to this suggestion, this could actually also work for EMO owners who also have accessibility or disability issues and have trouble speaking or can’t speak at all. Maybe adding an option for EMO to have a range of accessibility features for anyone that needs them would be a great feature to have included for EMO in the EMO App. (for example: just like we have them available for Microsoft Windows)

Not everyone will need this feature, but if it were available for people that did require it, it would greatly improve their user experience.

I love this idea @MasterAbbott . I believe that there are many people with EMO now that have various ability challenges that could benefit from this for sure.

You ARE very clever. I will try that when my Emo arrives! Thanks for sharing.

yes this is definitely a feature missing… He should wait for a response for a second or two … And he should say use you’re welcome etc…the Alexa devices do this and it makes all the difference it brings life to these smart speakers… Living AI should simply know this already. They don’t have EMO Pet interacting at all. It’s a missed opportunity and you nailed it …this is one of the most important missed opportunities from living AI

I would love to see a “Magic 8 ball” like function.