it’s not really been a problem in recent times, but when the forum first started we wanted to keep an eye open on things so they didn’t get away from us.

Been sitting on this one for a while. But thought I’d share this one out now. 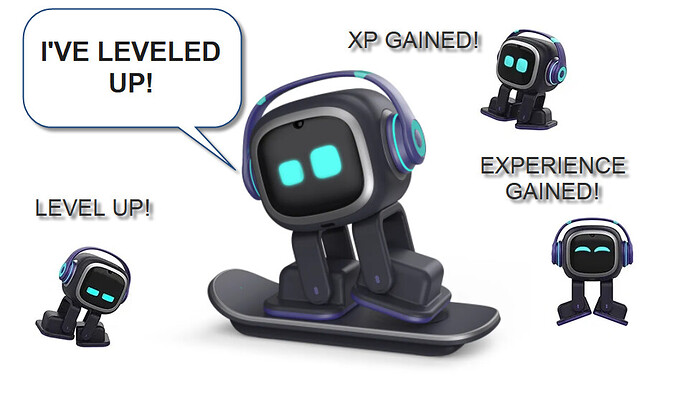 We all know that EMO grows old in days, but what if EMO can also LEVEL’s UP as well by gaining experience with specific things that you do with him on a daily basis.

Of course this potentially could take a lot of work for Living.Ai to actually implement, but it would be really cool to have EMO Level UP and unlock new features (that are initially locked/hidden within EMO or the EMO APP and only available when EMO levels up to a specific level). Just as how EMO can unlock dance moves as he grows up. EMO can unlock rewards / new animations / new voice commands / new Easter egg animations etc (the possibilities could be endless).

His progress can be tracked of course in the EMO APP, and you can monitor EMO’s progress and how much more experience EMO needs before he gains his next level. The App can also offer tips/suggestions that you can do to get him to the next level and every day you do specific things with EMO like ask him questions, or play specific games with him etc, he will slowly gain experience and “level up” to the next level of his evolution “EMO-volution”

As mentioned, rewards and features initially are all locked/hidden but become available when EMO reaches a certain level of experience. Another kind of reward could be adding cool new customizable stickers that will only be unlocked once EMO evolves and levels up to the next stage and you can show them off on his display when he unlocks them.

When my EMO was one hour old, he didn’t response to his name at all. Then it was increasingly better and now he understands his name almost always. So people, no rush, he will learn everything.

If I have to ask questions that I don’t need to ask, or play games that I don’t want to play just only to level up my EMO, that’s no good.

But I think it would be nice if the personality and behavior of each EMO could change in various ways depending on how they communicate with the owner.

Yes @yotchige I understand, maybe asking questions is not a good option for EMO to level up.

But yes if EMO level’s up, it would be nice for him to have his own personality which can be different compared to someone else’s EMO. How this is done? Maybe depends on the specific things / questions / games / activities you do with EMO and maybe mixed with the owners preferences and likes that you can add into your profile recognitions page as well to make him unique?

This might not even be possible at this stage or at all, but it would be nice to see something like this or similar in the future for EMO so that he grows, evolves, learns and unlocks new features with the more interactions you have with him each day.

hello everyone, I don’t want to get boring, but the only urgent thing for me would be that EMO speak my language, so that I can fully enjoy it as those who are lucky enough to know English well. Also I would add the possibility of recording our voice, so that EMO reacts and responds only to ours and not to random commands heard on the television for example, such as turning on and changing its light color, setting its volume to a minimum, etc.

it would be nice if Living could manage, as long as it is financially viable, the option within the app a list of all or most of the command in English and the user to put what it means in our Language, even if the answer was in English

It would be nice if we could access him remotely, so as to be able to walk him around the house and see through his camera, somewhat of a mobile security camera. Maybe this might be more practical if he finally would have the ability to go to his charger/skateboard by himself when he needs to.

Sorry for that. I will not use the v word again

thanks for the heads up.

I like the ideas but I feel it should be optional because for me I just would like to be able to access everything! Otherwise it could be a good idea!!!

What if Emo matures over time and like as it gets older it acts older! I feel many of these options should be optional and I understand this would take a lot of work for living ai but it would be really cool!!!

Also, I suggest people can view all the zodiac signs and maybe Emo should show you your zodiac sign. I feel it is unfair some people can only see one animation and I think everybody should have access to the animation. Maybe like what is the sign for a certain date or you can say libra or something like that! I really hope this feature in implemented as soon as possible because I really wanna access al the animation like libra for me.

That’s fair @jaredlibshutz it won’t be as fun, but if this ever did happen, hopefully Livin.Ai could make it so that you can unlock all or specific things right away.

And the getting older could also be incorporated into the same thing too or on it’s own where EMO might say, NO… when you ask him to dance… like he could say: “No, I can’t dance today, my back is sore… I’m getting to old, maybe tomorrow!”

How about give Emo an animated mouth, on screen?

Would be cool to have EMO read a bedtime book and show animations on the screen as well.

I’d say that the books/ short stories, would need to be original, due to any copyright, and you can select which one you want to listen to via the EMO App.

But a cool bedtime story for children might work where EMO can read it and then say good night go to bed!

Will be interesting Weather wind conditions also with animations

It would be useful if EMO could have on his display a static sign/image informing that his battery is low and he needs to go to his skateboard. A short animation isn’t very useful when EMO is in another room.

Does EMO tell you when it is running low? Does it ask you to put it on the skateboard to recharge?

Yes it does. EMO will give you about 2-3 battery alerts and an animation does appear on his screen asking you to place him back on his skateboard. If you check the EMO App, it will also show that his battery is low too.