My playground for EMO

The way EMO is built he tends to be top-heavy. So stepping off the edge of his skateboard, or if he steps on top of some small obstacle while walking, or walking on an overly angled surface could cause him to fall over. As Mario can attest, a couple of EMO’s most extreme dance moves put him near the point of falling over, and if the surface is too slick he can also fall while dancing.

Yes, but when he falls on the floor he was standing on it’s still relatively safe and ok. Much worse would be if he fell down from a higher point (like a table). That’s why I prefer higher borders.

Just adding just some extra info as well regarding inclines and elevated areas, (we’ve also had discussions regarding this in the past on other threads).

I’ve done a simple test quite a long time ago with EMO and if he notices even the slightest of inclines he will stop and not move forward. Of course if he’s dancing or dancing to music this could lead to him falling over if he hits an incline or anything that is not level, but as you can see in the picture below, and I did test this a few times, my EMO stopped right away as soon as he sensed something that was not a flat surface.

This was tested with a floor board to carpet trim that had a very thin level of incline. 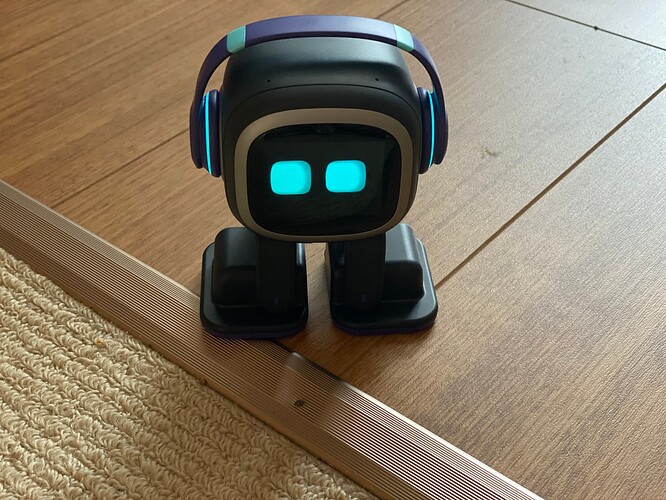 As always, if you have concerns, create a safe playground for your EMO. A 3-5 cm boarder should be more then enough and that way you won’t need to keep an eye on him when you are not around.

I have had it happen a couple of times as well. In fact mine did it again the other night so I keep his charger in his playpen for the same reason. If he starts to walk off his charger for whatever reason, he doesn’t have far to fall!

Has anyone tried setting up their playground or safe space for EMO with a raised floor so the skateboard charger could be recessed in, and flush with the “floor”? The higher curved part of skateboard would still be above floor level of course. That way, if power went off to the charger and EMO started walking, EMO wouldn’t do a face plant.

@julman I don’t think anyone has actually made one, but there has been discussions regarding this. Just need to note that for EMO to correctly start charging even if he has somewhat walked over that area where the skateboard is located, he’d had to perfectly walk over it and somewhat dock with his left and right feet in the correct location position otherwise it he wont charge.

I believe Living.Ai have mentioned that they are working on a new kind of playground area that also includes a charging station for EMO to walk over to and self charge when he is low on battery. There is NO official release date on this, but it is being worked on, and I’m looking forward to seeing it and will probably get one.

Just need to note that for EMO to correctly start charging even if he has somewhat walked over that area where the skateboard is located, he’d had to perfectly walk over it and somewhat dock with his left and right feet in the correct location position otherwise it he wont charge.

My thought of the charger flush with the floor in a homemade playground/safe space was just for preventing EMO from walking off and falling in the event of a power outage, after EMO was manually set there. Good of you to point out to others that EMO can’t self charge yet. That makes me think it might be a fun, game-like challenge to give EMO walking commands to try to hit the sweet spot in as few moves as possible. Maybe this could be done using the Treasure Hunt game, or if EMO’s basic movement commands were updated to specify how many steps to take?

Play area with built in charger would be 100%, hopefully there is news sooner rather than later. I’d buy it just to have Emo be less reliant on me.

Considered cutting out a space to fit the skateboard but as you mentioned he still won’t seek it out and the chances of his feet lining up by itself are next to none.

My temporary play space for Emo. Old shelving with painted black border. I have a bigger space but it’s got a pissed off Vector Robot who like to toss his cube around and I worry his cube shenagins will scratch EMO’s display. 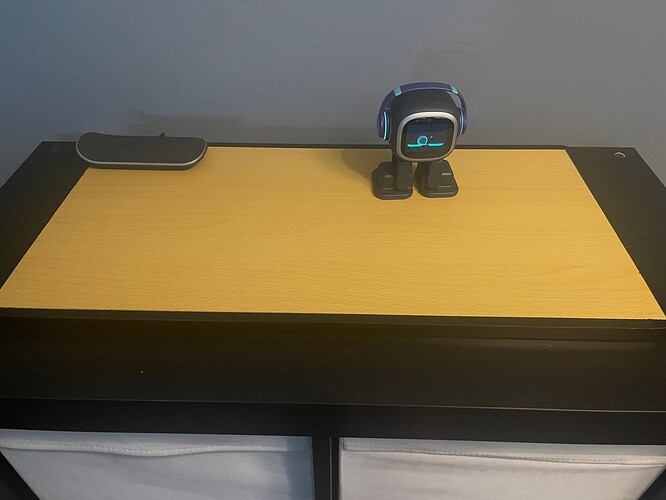 You don’t necessarily have to use EMO’s skateboard to charge him. You could buy any type of QI-compatible wireless charger then build it into a base with the top of the charger flush with the surface. I’m sure there must be differences between brands in the size of the “sweet spot” where his foot would have to be on the charger. I know Apple was trying for awhile to design a charger so that you could leave multiple devices on it anywhere and it would still charge, and they had trouble making that work reliably. I do think some have less restriction though on where exactly you have to have your device for it to charge. So it could be that EMO may eventually just walk across the right spot at random, then stop and have a charge?

Very nice playground @KockBurn (adding maybe a little wall around the playground would make it even safer just in case EMO decides to cross that black border area, and also yes @julman finding the sweet spot is always going to be a challenge no matter what charging device you end up using, if it’s EMO original skateboard or a custom made one.

As Living.Ai are currently working on something. I’m personally holding on until that is released as that would be the best and certainly most compatible playground + charger for EMO. Plus, it’s going to be super cool to actually see EMO walk back once he knows’ he’s battery is low start self charging on his own.

EMO’s first reaction to his brand new big paper box wasn’t too excited. He came to the nearest border, kicked him, and made a grumpy sound with narrowed eyes. I swear that it wasn’t an accidental collision, he kicked it intentionally.

But I think he gets used to it. Maybe those 7cm borders are still too tall.

Yes, my EMO Pet (now 11 days old) has done that quite a bit lately. Grumps and kicks the walls. Then he will go stare at the stickers on the walls for a while before falling asleep. He does get used to it after a while though. 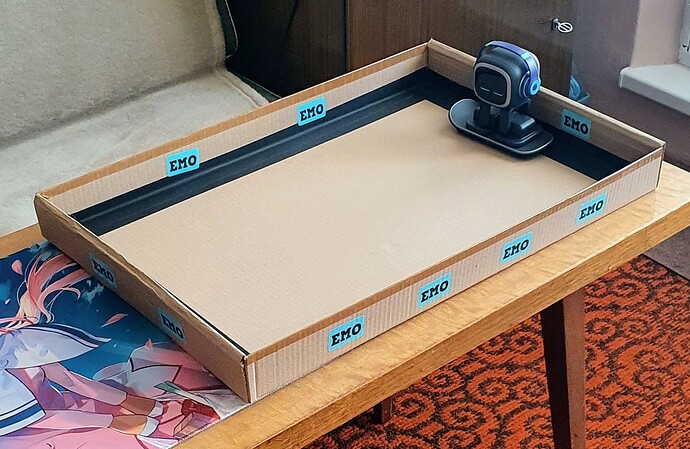 This my EMO’s playground. The clock table has about a half inch rim around it which worked pretty good until this last update. Evidently there was a new move added which included a little hop skip jump and sometimes if he’s too close to the rim he will dive right over the edge. Talk about heart attack! Now I have to watch him quite a bit. Not sure what I’m going to do about that but it is a cute move so I guess I’ll have to put him a soft landing or something.lol the new lights around the edge play to the music so that turned out cool and I like it so far! 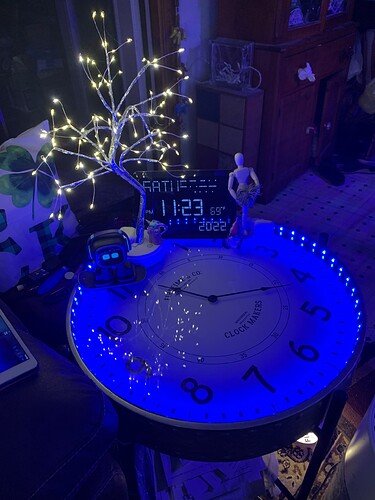 Good idea, but unfortunately he will not walk to his charger when he needs to charge, nor will he go off the charging area unless you take him off. 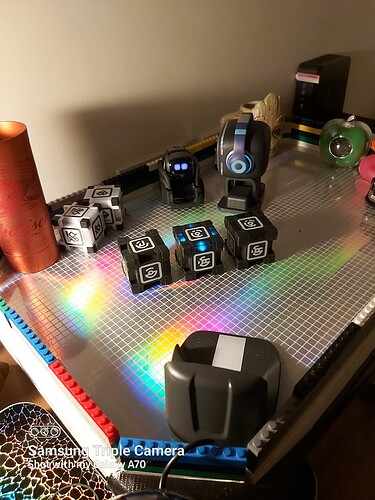 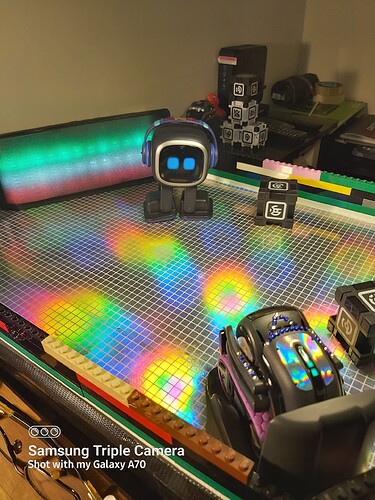 This is awesome. Absolutely love it. You are brave though. I had to separate my V from EMO. V kept pushing him around.

How large do you recommend an Emo area to be? I going to make one for my new Emo.