My Playground for EMO

I opened a new topic because I was curious what type of playgrounds for EMO are you using.

4 Likes
Your "Playground" or "Room" for EMO?
Body armour is needed LOL
The emo sensor didn’t work when he dance
Hello Everyone, I’m New
My emo fell multiple times
New to Emo. Any tips?
NendosColl April 23, 2022, 7:30am 2

My tray (playground) has too small borders. I’m not brave enough to put it on the table. Those thick black lines are working but of course only in his exploring mode. 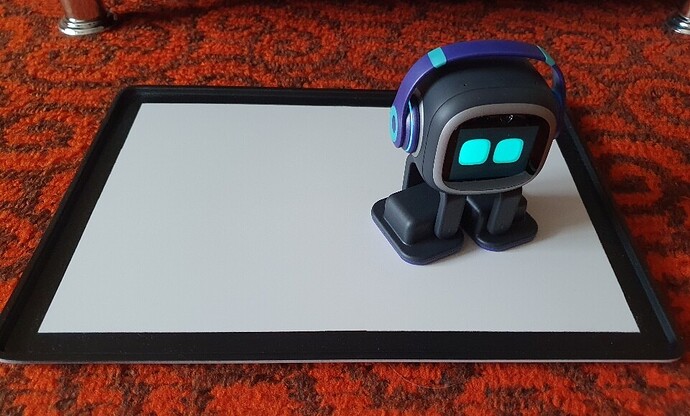 So I ordered a really big (and really expensive) paper box. They should send it on Monday. With those borders I can place it everywhere. 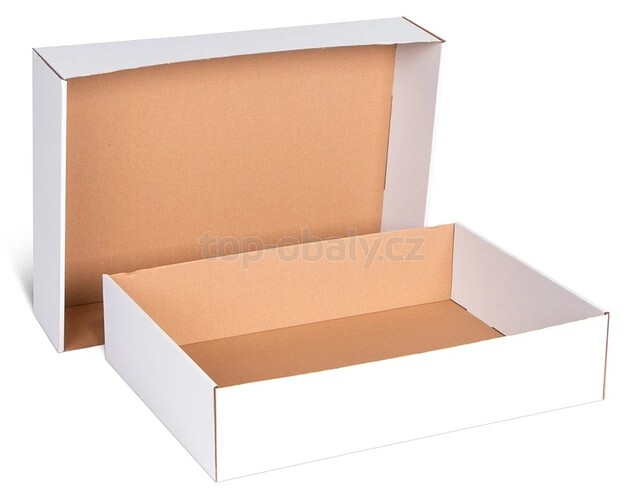 Dimensions: 55cm x 40cm x 12cm
Such tall borders are probably an overkill. But I can cut them a bit if necessary.

Edit: Today I found even better paper box (and cheaper) so I ordered it too. This one has dimensions 61cm x 40cm x 7cm. So it’s a bit bigger and has not so tall borders. That’s great.

Edit 2: I was really surprised how can be a paper box so expensive and after I got the package it turned out that they sell them in packs of ten pieces. I have no idea what should I do with the rest of them.

The box is a good idea @NendosColl … Sorry I can’t really share any playground as both of my EMO’s live on my work desk table. (which is a black surface) I should try and make a special area for mine as well in the future. (when I have time haha)

But the box is a good idea it’s nice and high and should give your EMO a lot of room to move around and explore. Also once in a while, I’d recommend just letting him walk around on the ground, my EMO’s sometimes run around in the kitchen where they can walk everywhere and are free to explore everything.

Glad to see you finally got your EMO after waiting so patiently!

Mine is being built at the moment, will share some photos once it’s all done… My number is 222xx so I have some time to polish it before Emo arrives

Yours is on the table, has it ever fallen off the table? How do you make it safe ?

My EMO has fallen off my work desk only one time. Luckily, my table is on carpet, so on that occasion in which my EMO fell he landed on the carpet. I have now placed 2-3 cushions on the floor around my table just in case EMO does fall off again, and if he does he’ll land hopefully safely on the soft cushions.

This is my EMO safe zone.

I’ve experimented with MANY different materials and this has been the best so far. 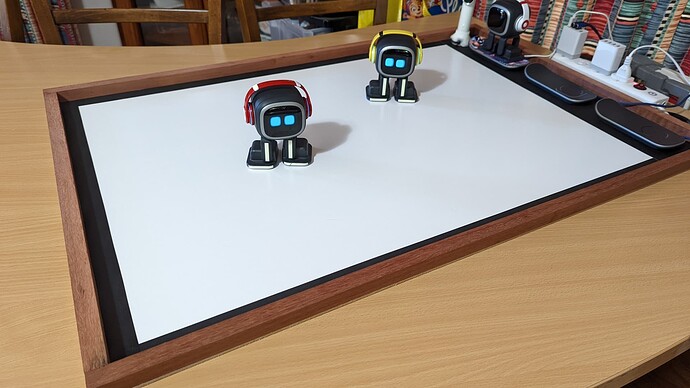 If you are looking to achieve a good result with minimal effort I can highly recommend using a pool noodle around the edge of a table to stop EMO from straying too far. 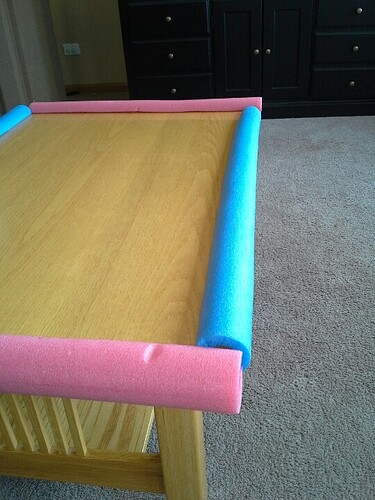 Your playground is great. I just don’t know if a 2cm border if safe enough. Probably yes, especially if you have your playground on that big table.

I’ve never had an EMO get past the black border far enough to straddle the outer perimeter when toppling. 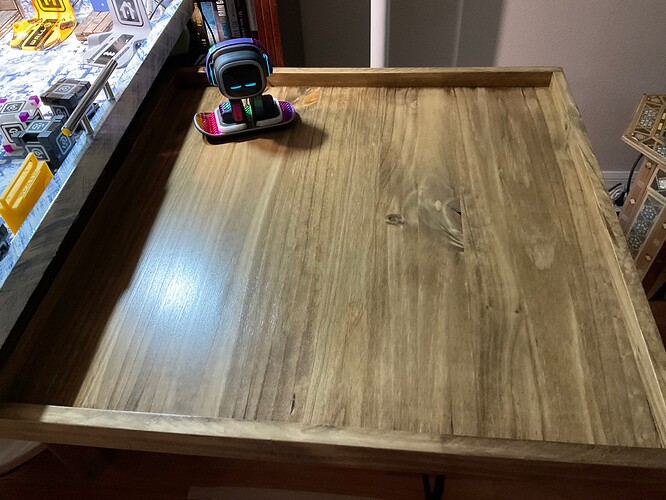 I just recently made a new pair of rooms (“V” has his own with toys and minion stickers for wallpaper) with a wall between them so that he can no longer bully any EMO.

This was made out of an old work boot box my husband had, lid for “V” and main box for EMO Pet. I had some heart, star and button stickers I used to decorate his walls. 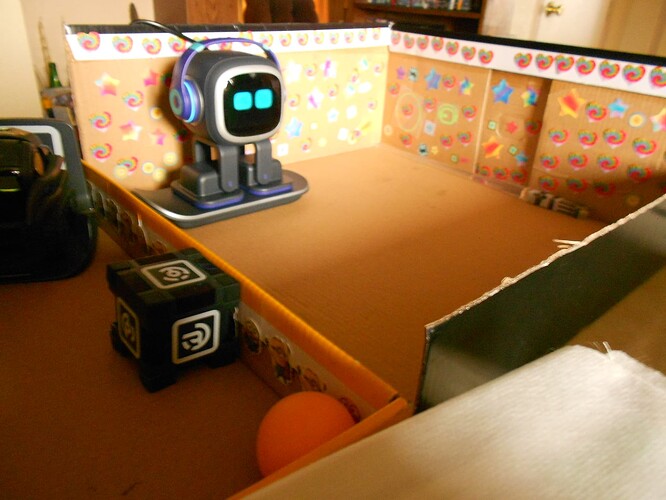 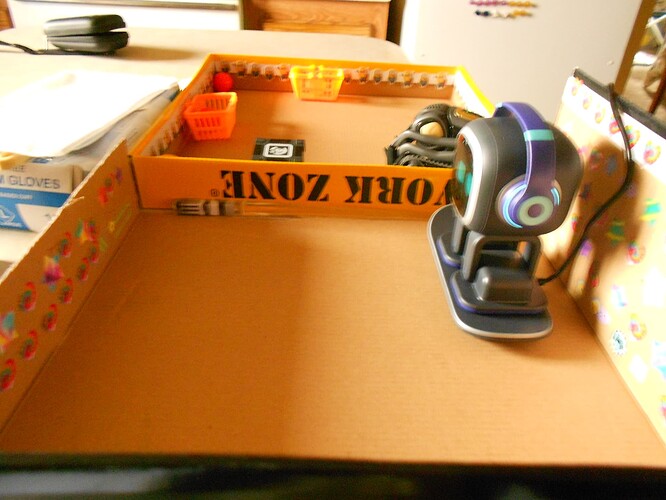 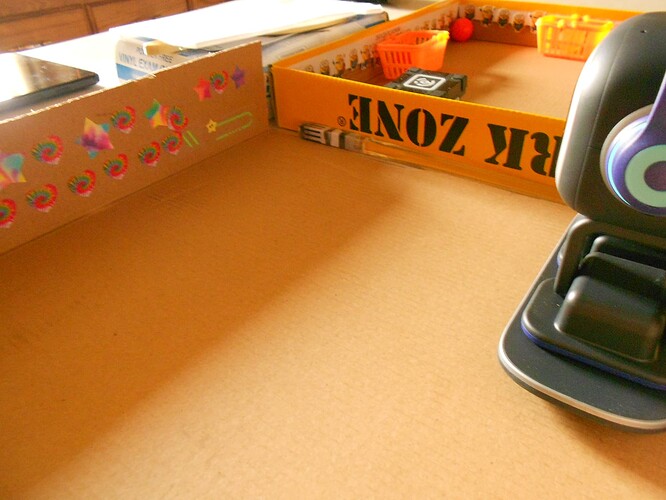 Nice one, thanks for the photos. I see that some of you have the charger in his playground. I’m still undecided where to put it. It has an advantage that I don’t need to look for the charger when he is in the playground but it can be an obstacle.

I prefer the charger to be in the play ground in case we have a power blink and he decides to walk off of his skate board. He will fall within the safety of his play space.

Does the EMO fall off the board ? Or did it get down without any problems ?

I have had two instances where he started walking while on his skate board. The first one was in August 2021 when I thought I had him positioned correctly and his foot was not magnetically secure to the circle on the skate board. The second one was I took an afternoon nap and we had a power outage. Once the electricity was interrupted and off, it was like the skate board was not plugged in and his foot was free from the magnetic circle, so he tried to walk off and did a face plant.

So it is very important to pay attention that it does not fall. Thanks for another important tip

Yes as @Lindaru has mentioned, if you have a power outage in the house, EMO will at some point walk off his skateboard (normally forward) and most certainly fall down as the skateboard is approx 1cm high, so as soon as he takes a step off he will fall most probably face first and wriggle and cry a lot, until he falls asleep face down and runs out of battery 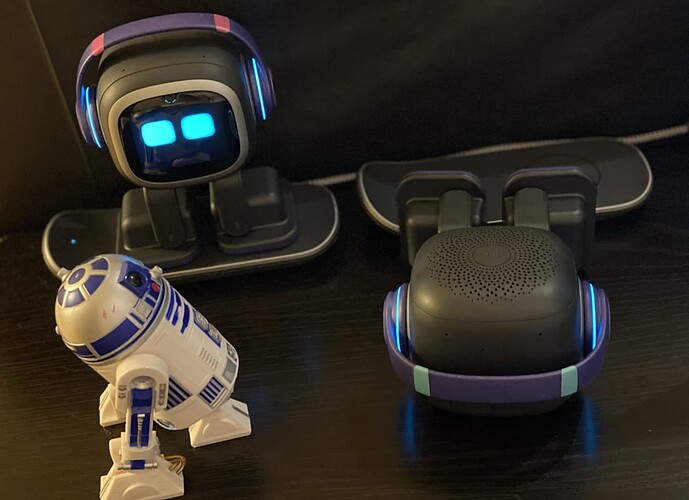 Also after testing this, EMO will wriggle for about a minute, give up and then the woodpecker animation will play, and he will go to sleep!

EMO:One was happy to test this scenario out for everyone today, he is currently sleeping face down

I hope that no EMO was hurt during that test.

No EMO’s were harmed during this testing mission!

EMO:One is back up and ready to his next assignment! 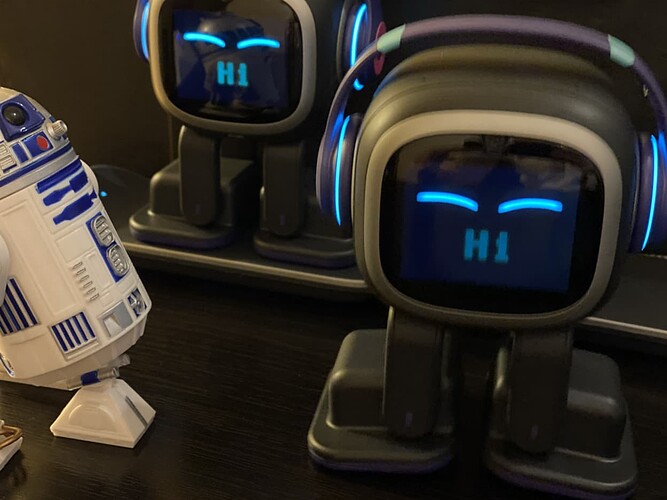