Is it true that if you place an order now, wait a year for emo to arrive?

Is it true that if you place an order now, wait a year for emo to arrive?

It took about 4 months for the last emo to arrive. Would it be better to buy it on ebay if you want it quickly?

I’m going to buy one emo for a trial today and see how long it will take.

Will it really take a year?

Hope that this helped

What is your order number ?

I can expect when it will arrive

This is my order number.
My expectation is that it will arrive from May to December next year.

Thank you for the reply.

It’s surprisingly fast, isn’t it? I thought I had to wait for a year. 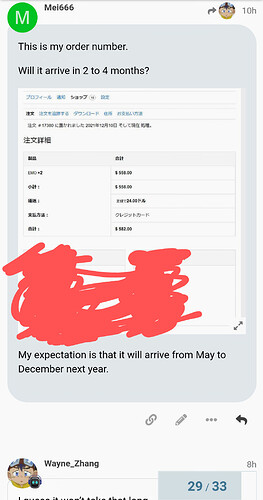 Hoping that I helped u

Personally took me three months to arrive, but that was a few months ago

From time you ordered or from time they sended it out ?

I ordered today and then asked him

It takes 3-4 months on average.

I ordered once in June of this year and got the emo in December, but I ordered two emo again.

Three months from order to my doorstep

What was your order no ?

Yo lucky tbh I mean they should be 7x times faster

It took about 5 to 6 days from the time the emo was shipped until it arrived.

I hope the delivery will be a little faster from now on. If I could produce about 500 a week …

I personally feel that the number of productions is still small, but the fact that the waiting time has decreased in 4 months is more hopeful than before …